Eric Metaxas has had a varied career as a biographer, children's author, humorist, talk show host and the creator of Socrates in the City a salon type program which has featured dozens of thinkers in conversation with Metaxas. He is the author of the #1 New York Times bestseller BONHOEFFER: Pastor, Martyr, Prophet, Spy and his most recent book Miracles has also been on the bestseller list.

Q: Why write a book on miracles?
A: Everyone wants to know whether miracles are possible in this day and age -- and you can put me at the top of that list! I have discovered that they are. So ask yourself, if you had discovered that, wouldn't you want to tell the whole world? I also think it's important to be skeptical of miracle claims, so I really want to have a serious conversation about what constitutes a real miracle and weed out the fakes.

Q: What attracted you to the topic?
A: Just the fact that there isn't a balanced discussion about it out there that I know of. There are people who are too gullible about the miraculous and then there are people who are viciously sneering and dismissive of it. You can't trust the judgement of either side. I wanted to give the reader a balanced view and draw them into the conversation without checking their minds -- or their childlike curiousity -- at the door.

Q: Do miracles usually have a scientific or rational explanation?
A: It depends what we mean by those terms. God is never irrational and nothing that's real can be irrational. But when we use the term "scientific" it gets awkward, because science by definition can only comment on what's inside the known universe of time and space and can't know whether there is anything beyond it. In other words, rationality doesn't have limits, but science does have limits. 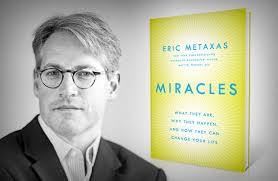 Q: What is your attitude toward faith-healers like Benny Hinn or Oral Roberts? Are they real?
A; They have definitely been used to bring about healing miracles, but that doesn't mean I agree with everything about them. Far from it! Benny Hinn is very controversial, but I have no doubt that the story in my book about him is true because it happened to someone I know very well.

Q: You tell stories in a way that makes doubt seem almost impossible-like the story of Larry and Ramon. What other possible interpretation could there be for a story like that?
A: Is that not an AMAZING story? It's almost unbelievable, and that's the whole point. It challenges us to say that either this is a lie or a hallucination -- or it's true and really happened. Larry sure doesn't seem like someone who would lie or hallucinate, so at some point you have to face the facts -- or face the fact that you don't want to face the facts and then ask yourself why? What bothers you about the idea that there might be a God who performs miracles?

Q: What happens to people who stop believing in miracles?
A: When Fleetwood Mac sang "Don't Stop Believin'" they were saying something that really does apply to all of us. On the one hand we shouldn't be gullible or intellectually sloppy, but neither should we ever lose the childlike wonder that is at the heart of all creativity -- and all science, for that matter. We need to be open to "what is" -- to the nature of things -- and if it happens that the miraculous is possible, we have got to be open to it. To be closed to it, frankly, is irrational, because we can have no rational basis for claiming that there's nothing beyond this world. We can't know whether there is or isn't. There are clues, perhaps, but to rule it out is simply childish.

Q: Do miracles happen more often in non-advanced societies?
A: No one knows. It's possible that people in more primitive cultures are more open to the miraculous because they know that the supernatural world is real. Many in the modern West have closed themselves off to that and it's a pity. We think we're smarter than primitive peoples, but in some cases we're just arrogant and closed-minded. What irony!

Q: Does faith or lack of faith trigger (or not) miracles?
A: It can. That's another big mystery. I talk about this in the book, of course, and I say that the real answer is yes and no. It's more complicated than you'd think.

Q: What are your plans for a next book?
A: That it sell incredibly well and deeply move everyone who reads it. Oh, you meant what are my plans in terms of writing my next book. Well, I'm almost finished with a book titled Seven Women, about seven women who are just extraordinary human beings and whose lives we need to know about. I wrote a book called Seven Men and everywhere I went I was asked when I would write Seven Women, so now I have. It comes out next year.

Q: You achieved a lot of notoriety for your speech at the National Prayer Breakfast in front of President Obama. Do you have any plans to run for political office yourself?
A: The word notoriety has a negative implication and in fact the response to my speech has been tremendously, overwhelmingly positive. It's been astounding, honestly. It's had almost a million views thus far. You can see it at my website. In the middle of the speech I tried to get Nancy Pelosi to pretend she was my wife, but I don't think she got the joke. And I led the President and First Lady in singing "Amazing Grace" at the end, and I'm not kidding, as you can see for yourself.

Q: What are your next projects?
A: I'm developing a TV talk show, because there are many topics like miracles that we don't seem to be having an honest and civil conversation about. I'd like to change that, as you might guess. It would be like an updated version of the Dick Cavett Show. Dick's a friend and he would be a frequent guest, of course, because he's more fun to talk to than anyone on the planet. But getting a talk show on the air these days would take a miracle. Fortunately I know that they still happen. So I'm counting on it.