A huge meteorite impact on Mars five million years ago blasted toward Earth many of the rocks that scientists scrutinize to learn more about the Red Planet, a new study reveals.

The cosmic crash left a 34-mile-wide (55 kilometers) gouge on Mars called Mojave Crater and is the source of all "shergottite" or igneous rock Martian meteorites found on Earth, researchers say. Examining the crater and the meteorites also led to new revelations about how old the rocks are.

"We tried to find good arguments to convince ourselves that [Mojave Crater] was five million years or younger. You don’t expect this size of crater so recently formed, statistically at least," lead author Stephanie Werner, a planetary scientist at the University of Oslo in Norway, told Space.com. [Mars Meteorites: Red Planet Pieces on Earth (Photos)] 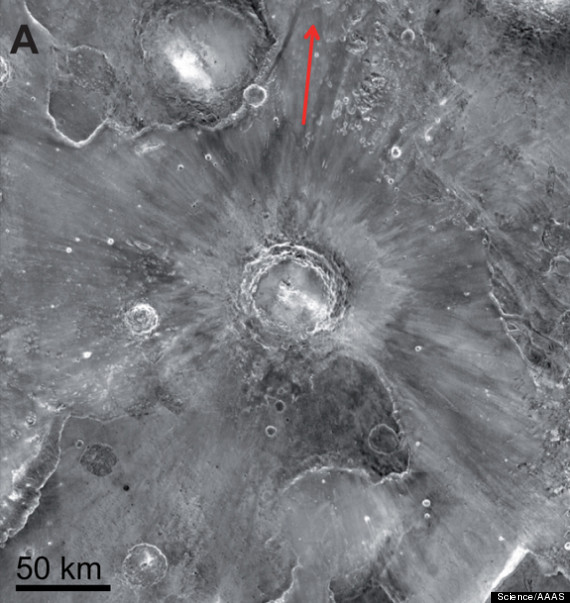 A look at Mojave Crater on Mars. The rays are evidence of debris thrown up from an impact that happened about five million years ago. The arrow points towards crater clusters used to estimate the age of the region.

Werner's team first used a technique called crater counting, which estimates a region's age by seeing how many large and small craters are in a particular zone. The more large craters, the older the terrain likely is.

Through their detective work, Werner said, they found the crater is indeed about five million years old. The material blasted from Mojave Crater had fewer meteorite strikes than the surrounding channel floor. 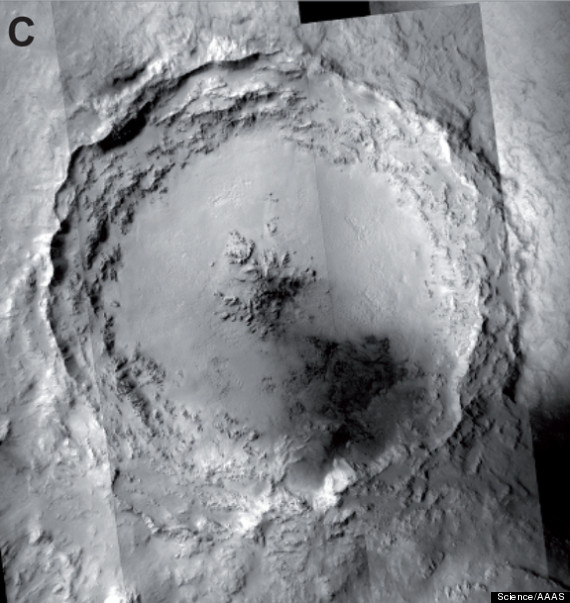 Mineral studies of Mojave Crater using NASA's Mars Reconnaissance Orbiter and the European Space Agency's Mars Express orbiter revealed a good match with shergottites, as both the meteorites and the crater had pyroxene minerals in similar abundances.

The find, however, yielded an age mystery. Shergottites (which make up about 75 percent of Mars meteorites found on Earth) appear to be youngsters despite their origins. While a plateau around Mojave Crater is 4.3 billion years old, shergottites were believed to have crystallized (or solidified) between about 150 million years ago and 600 million years ago. Reconciling the difference was Werner's team's next step.

The study suggests scientists underestimated the shergottites' crystallization age because the rocks were "reset" by melting events. Meteorite impacts, tectonic activity and volcanic eruptions could do this, researchers said. Once the rock is broken up with heat or geochemical processes, when it is reformed it would appear much younger than it actually is.

So the shergottites are probably around 4.3 billion years old, Werner said, adding that this conclusion is the most "provocative" part of the study.

"It will be quite interesting to see how that will be discussed in the future," she said. 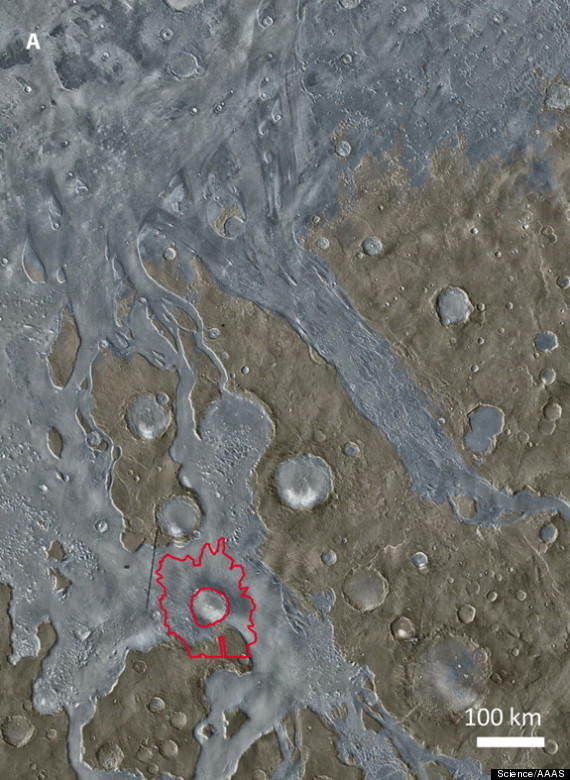 A daytime view of the area surrounding Mojave Crater, shown in a picture taken by Mars Odyssey. Mojave Crater is circled in red. Craters were counted for the plateau units (brown), channel units (blue-grey) and ejecta from Mojave (red line).

The region could bear more study, Werner added, as there are channels around Mojave Crater that suggest the presence of water. There were two different geological episodes, one less then five million years ago, the other probably more than 3.3 billion years old.

"It would be very interesting to see how [the impact] would fit with the consideration of lifeforms very early on Mars," Werner said, adding that it's unclear whether a space rock impact in the water-rich area would destroy or boost the chances of life on Mars.

More generally, Werner and her colleagues are looking to enhance dating techniques on Mars by comparing crater counts to mineralogical data gleaned from orbit, and up-close measurements from NASA's Curiosity and Opportunity rovers on the surface.

The researchers plan to look for more source craters for Martian meteorites, and to keep their fingers crossed for a future sample-return mission that would see part of the Red Planet's surface sent to Earth for better analysis.

The new study was published March 6 in the journal Science.