SAN FRANCISCO — A freak wave killed seven people in Chicago on a sunny day on the shore of Lake Michigan nearly 60 years ago.

At the time, no one knew what set off the monster wave.

Researchers now know the wave was a pressure-driven tsunami, stirred up by storms passing earlier in the day, said Chin Wu, an engineering professor at the University of Wisconsin, Madison, at last week's annual meeting of the American Geophysical Union.

Called meteotsunamis, the weather-related waves strike frequently in the Great Lakes and along the U.S. coastline. The 10-foot-high (3 meter) wall of water that hit Chicago was one of two recorded in Lake Michigan in June 1954. An 18-foot-tall (5 m) wave took out cars in Daytona Beach, Fla., in 1992, and a 12-foot-high (3.5 m) surge poured into Boothbay Harbor, Maine, in 2008.

The largest of these waves can reach a height of about 13 feet (4 m), such as the fatal meteotsunami that struck Nagasaki Bay in Japan in 1979. Along with loss of life, the waves have caused millions of dollars in damage to boats and harbors around the world.

The United States is funding efforts to better understand and predict the killer waves, which may be more common than once recognized, said Paul Whitmore, director of the West Coast and Alaska Tsunami Warning Center.

"If you look back historically, there's several on the East Coast that have done damage and injured people throughout the past number of years, so that was our motivation to move forward to being able to actually forecast these," he told OurAmazingPlanet. Spain and Croatia, countries whose narrow harbors enhance the severity of meteotsunamis, already issue general warnings.

A meteotsunami forms when a storm slams the water's surface with a burst of pressure. Over the open ocean or a large lake or sea, a sharp jump of 2 to 10 millibars can start a wave (or make your ears pop). (A millibar is a unit of pressure; standard sea level pressure is 1,000 millibars.) Squall lines of thunderstorms and gravity waves (oscillatory air patterns) can also unleash meteotsunamis.

But to sustain the wave, the pressure jump must also be accompanied by resonance — the weather front or disturbance needs to travel as fast as the wave to feed it energy. The storm can pass hundreds of miles or kilometers away from shore, yet form a tsunami with enough energy to cross the ocean.

Once the wave has enough energy to travel to shore, the tsunami needs to hit a bottlelike or V-shaped harbor or bay where it can quickly gain height and rush the coast. The narrow harbors amplify the waves by reflecting, or oscillating, the wave back and forth. [Image Gallery: Monster Waves]

The term meteotsunami was coined in 1996, but awareness of the waves dates back to the 1950s, said Alexander Rabinovich, a research scientist at the Shirshov Institute of Oceanology in Moscow. The advent of weather satellites and armies of buoys monitoring pressure changes across the ocean surface, combined with a marked interest in tsunamis following the deadly 2004 Sumatra earthquake, has galvanized research in the phenomenon, he told OurAmazingPlanet. 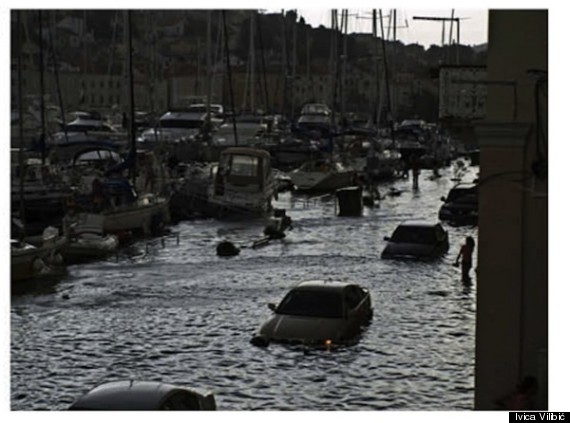 A meteotsunami caused flooding in Mali Lošinj in 2008, along the Adriatic Coast.

Unlike earthquake-generated tsunamis or hurricanes, storm-driven waves won't devastate an entire continent's coastline. They slosh about in narrow harbors and bays. But what makes them so hazardous is their tendency to appear on sunny days, spawned from storms hundreds of miles away.

"A big wave comes in and you're on the beach and maybe you think, 'Hey, a big ocean liner just went by,'" said David Tappin, a marine geologist with the British Geological Survey. "But increasingly, people are looking at historical records and at the meteorological information we have, and people are realizing this is more of a hazard than we previously thought."

Tappin and his colleagues identified the first recorded meteotsunami in Britain, using satellite imagery, pressure buoys and several YouTube videos. In a feat of CSI-level sleuthing, they verified the wave was a meteotsunami by backtracking in time from when it arrived on the Cornish coast, in the Yealm Estuary. The researchers resolved everything from the culprit storm in the English Channel to finding the crime scene: the buoy recording the 5-millibar pressure jump where the wave began. At the AGU meeting, Tappin showed a YouTube video of people walking through rapidly rising water to St. Michael's Mount in Cornwall as the sun shines.

"You have the source hundreds of kilometers away, you have no geological indication of shaking, but suddenly you can get a big wave coming in, so [meteotsunamis] are quite dangerous from that point of view," Tappin told OurAmazingPlanet.

With the world's winds growing faster and wave heights increasing because of a changing climate, and storms predicted to become more intense in coming years, Tappin is concerned that Britain is at risk for more meteotsunamis.

"With global warming, we're going to have more of these events. One of the recommendations of this study is that we look at whether this is going to be an increasing hazard for Britain, because we've never had one of these before," he said.

While there is great interest in predicting meteotsunamis before they strike, the interplay between the atmosphere, the ocean and the shape of a harbor makes it difficult to accurately estimate a wave's size at present, said Sebastian Monserrat, a physical oceanographer at the University of the Balearic Islands in Spain.

"When you have an earthquake, the earthquake just stops, so you get information on the wave before it reaches a hot spot," like a harbor, he told OurAmazingPlanet. "But the atmosphere forcing is modifying what is happening in the water, and the atmospheric perturbation can change, so it is more challenging to predict a meteotsunami and to have an early warning," he said. [The Surprisingly Strange Physics of Water]

The narrow harbors of Spain's Majorca Island and Croatia, along the Adriatic Sea, are especially prone to meteotsunamis, Monserrat said.

"The meteorological office in Majorca is giving a warning when the atmospheric situation is likely to produce these meteotsunamis, and that is working, but the problem is that this is not the most important thing," he said. "It's not just to know that they're going to happen, but to know how large they're going to be. And this is what we're trying to improve."