Do you like CSI? I remember the esteemed climate scientist Michael MacCracken once saying that climate researchers need to be like CSI investigators, prying out the truth from obscure clues. But how often has a CSI episode been a whodunit where the outcome could effect everyone? So, kick up your heels, and get into some details.

We've been discussing Eastern Siberian Shelf (or ESAS) methane emissions (for a refresher, see episodes #1, #2). Andrew Revkin at the New York Times, at first bizarrely dismissive of worrisome new findings by leading ESAS researchers, asked his readers if they didn't feel reassured by dissuasive arguments from various methane experts and academics. I'll summarize those arguments, and you can see how you feel:

"What a relief," I can hear you sigh. "And all undeniably accurate facts! I feel better, much better!"

Not so fast. We'll examine each 'reassurance,' but first let's review why the ESAS is unique.

• It's the world's largest continental shelf, and methane exists there in massive stores of different kinds, depths, and ages. It is by no means just methane in methane hydrate at issue. Indeed, much stored carbon there was formed along with the various stores of land-based frozen carbon discussed recently on the front page of the New York Times: indeed, it was that land permafrost until re-submerged. The graph shows why the New York Times' approach made little sense, ignoring these ESAS emissions while discussing land-based emissions right nearby, sometimes coming from the very same stores. And these different emissions and their local impacts will strongly interact, and therefore need to be considered together. 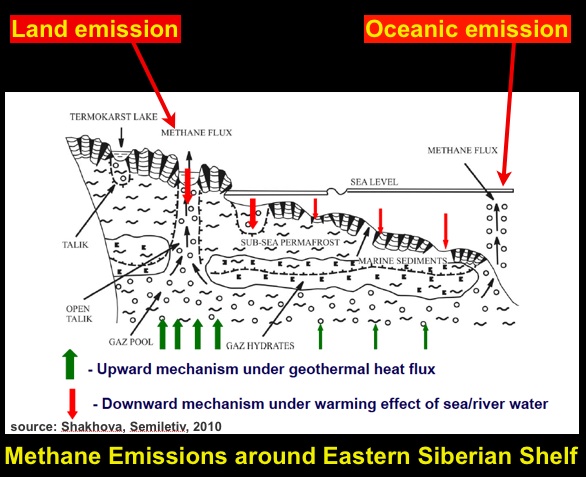 • There is thus a unique 'cap' of submarine permafrost (alone estimated to contain 500 Gt carbon) on top of the hydrate, functioning to stabilize the shallow hydrates and prevent migration of free gas (estimated at another 700 Gt) which lies beneath the hydrate, itself estimated to be ~1,000 Gt carbon.

• It's the world's shallowest shelf, so these hydrates depend mostly on temperature for stability (opposed to pressure, like for deeper hydrates).

• Being so shallow, consumption by microbes of any released methane in the water column might well be less efficient, so more methane could reach the atmosphere.

The second point is probably most important for the current discussion. The 500 Gt in this 'cap' is not very secure. It has warmed from about -17 ºC (when re-submerged) to just slightly below freezing (-1 - -.5 ºC), bottom waters there having warmed about 1 ºC per decade recently. It is perhaps 3-5% degraded already with taliks (thawed areas within permafrost), which can become migration routes for gas from below. And just 10% of this cap's carbon itself, released rapidly (within a decade) as methane, could create the catastrophe we envisioned last episode. Thus, the hydrates themselves do not even necessarily need to destabilize for the ESAS to have major climate impacts. Reassurance #2 is therefore empty.

For Reassurance #1, let's start with this metaphor: a doctor tells you the malignancy they just found on you hasn't grown much, yet. And it's just the tiniest fraction of your body weight! Feels reassuring? And adding that there is some recent methane growth, but attributable to wetlands, depends upon isotopic analysis. Isotopic analysis is one of the great wonders of modern science, as important to climate research as to CSI-style forensics. But while some things give very clear isotopic signals, deciphering others is an art. A paper just published a few months ago, Arctic methane sources: Isotopic evidence for atmospheric inputs (Fisher et al, 2011), says, of nearby air sample methane isotopic signatures, "this bulk result is strikingly similar to typical wetland emissions, though with the caution that it may record a mix of disparate sources," and later adds that, "there may also be significant input from East Siberian Arctic Shelf emissions with variable d13C," and again later, "this does not exclude inputs from isotopically lighter shallow sourced CH4 emitted from clathrates further afield such as in the eastern Arctic." Indeed, discussing the isotopic signatures of different ESAS methane, leading ESAS researcher Natalia Shakhova said recently,"It is incorrect to say that anyone is able to trace that signal yet." Reassurance #1 is thus quite weak.

Reassurance #3 is a not uncommon form of faulty logic made by professionals who occasionally get bleary-eyed and lost in their charts: ice cores give a detailed record of changes from periods cooler than ours to today. Unfortunately we are likely exiting this Pleistocene range soon, with temperatures rising to levels unseen during recent interglacials -- and these particular hydrates are uniquely sensitive to temperature, as already noted. Reassurance #3, dead on arrival.

Ah, Reassurance #4, we still have #4! Modeling, indeed, has suggested ESAS permafrost destabilization 5-10,000 years after inundation, depending on conditions of prior freezing. The permafrost cap is now hovering just below freezing. Without humans, ESAS bottom waters would surely be several degrees cooler today. Now they will certainly warm more and are doing so fast: our human signal here will clearly be added on top of underlying long-term degradation, making something that has probably been benign in recent interglacials potentially catastrophic. And current warming is clearly causing vast changes there. A key to the region is the Lena river, a prime source of its rich sediments, its carbon stores, methane, etc. It is fed by methane-rich lakes underlain by yedoma (wind blown matter making organic-rich permafrost), with its quickly warming waters largely driving a 500% increase in flaw polynyas (ice-free sea areas in winter) over the ESAS, around the river's mouth, during the last two decades alone.

Our reassurances now are ended, and have melted into air, into thin air, and I don't wish to unduly frighten you, but one calculation based on sonar acoustical data, would, if correct, actually suggest we've already arrived at catastrophic-level ESAS emissions, but for one thing: obviously there's no big atmospheric methane spike yet (as said at the outset), so, if accurate, the reading would indicate that massive methane releases there must be getting consumed prodigiously by microbes in the water column, as during the Gulf oil spill. For now, let's just hope those were schooling fish the sonar was picking up!

How now? Still feeling reassured? You have to admit, if you ask yourself what the initial stages of a catastrophe there might look like, it would probably look much like what we're seeing today: researchers on the ground frequently finding larger and larger plumes of methane bubbles, hotspots of super-saturated water column, greatly elevated atmospheric methane levels nearby, and slightly elevated levels over the whole arctic sea, with various academics questioning all these extraordinary findings. We don't know, but it doesn't look nice at all.

Major funding should go right away to figuring this out. And if we were smart, since we can't all get into lab coats with our excellent CSI researcher friends like Natalia Shakhova and Igor Semiletov (watch one of their Powerpoint presentations here), we should also be discussing what we could do if the news there soon goes from bad to worse. Indeed, let's discuss that next episode.