The oldest known star appears to be older than the universe itself, but a new study is helping to clear up this seeming paradox.

Previous research had estimated that the Milky Way galaxy's so-called "Methuselah star" is up to 16 billion years old. That's a problem, since most researchers agree that the Big Bang that created the universe occurred about 13.8 billion years ago.

Now a team of astronomers has derived a new, less nonsensical age for the Methuselah star, incorporating information about its distance, brightness, composition and structure.

"Put all of those ingredients together, and you get an age of 14.5 billion years, with a residual uncertainty that makes the star's age compatible with the age of the universe," study lead author Howard Bond, of Pennsylvania State University and the Space Telescope Science Institute in Baltimore, said in a statement. [Gallery: The Methuselah Star Revealed]

The uncertainty Bond refers to is plus or minus 800 million years, which means the star could actually be 13.7 billion years old — younger than the universe as it's currently understood, though just barely. 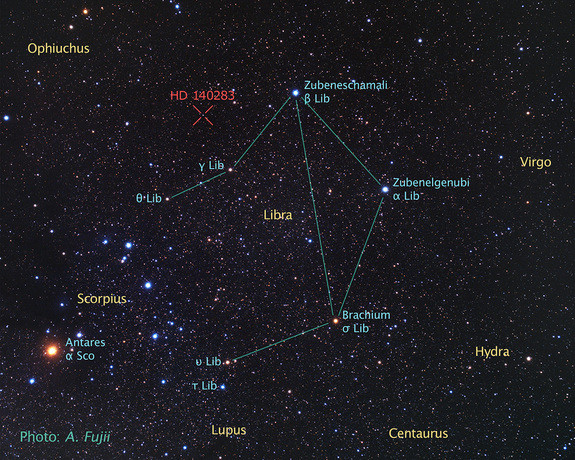 This is a backyard view of the sky surrounding the ancient star, cataloged as HD 140283, which lies 190.1 light-years from Earth. The star is the oldest known to astronomers to date. Image released March 7, 2013.

Bond and his team used NASA's Hubble Space Telescope to study the Methuselah star, which is more formally known as HD 140283.

Scientists have known about HD 140283 for more than 100 years, since it cruises across the sky at a relatively rapid clip. The star moves at about 800,000 mph (1.3 million km/h) and covers the width of the full moon in the sky every 1,500 years or so, researchers said.

The star is just passing through the Earth's neck of the galactic woods and will eventually rocket back out to the Milky Way's halo, a population of ancient stars that surrounds the galaxy's familiar spiral disk.

The Methuselah star, which is just now bloating into a red giant, was probably born in a dwarf galaxy that the nascent Milky Way gobbled up more than 12 billion years ago, researchers said. The star's long, looping orbit is likely a residue of that dramatic act of cannibalism.

Hubble's measurements allowed the astronomers to refine the distance to HD 140283 using the principle of parallax, in which a change in an observers' position — in this case, Hubble's varying position in Earth orbit — translates into a shift in the apparent position of an object.

They found that Methuselah lies 190.1 light-years away. With the star's distance known more precisely, the team was able to work out Methuselah's intrinsic brightness, a necessity for determining its age.

The scientists also applied current theory to learn more about the Methuselah star's burn rate, composition and internal structure, which also shed light on its likely age. For example, HD 140283 has a relatively high oxygen-to-iron ratio, which brings the star's age down from some of the earlier predictions, researchers said.

In the end, the astronomers estimated that HD 140283 was born 14.5 billion years ago, plus or minus 800 million years. Further observations should help bring the Methuselah star's age down even further, making it unequivocally younger than the universe, researchers said.

The new study was published last month in the Astrophysical Journal Letters.