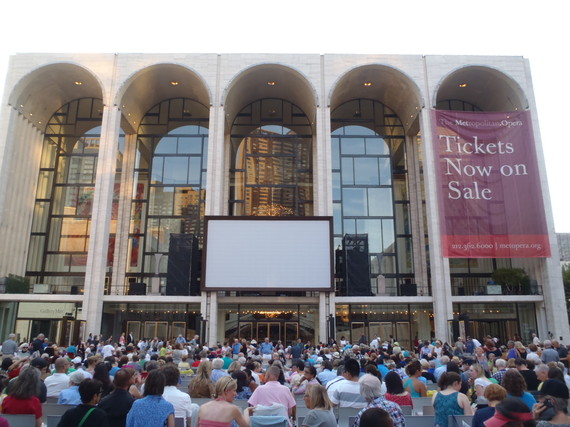 My first taste of opera was mind-boggling...I was a freshman at Columbia - newly planted for a week in NYC from the suntan shores of Siesta Key - I partook in a Freshman Orientation program named Urban NY, where first-year students at Columbia sign up for really eye-opening experiences hosted by a professor (from Harlem Tour to Saturday Night Live) in our first month on campus, so we can get acquainted with New York City and meet classmates before classes commence. I was so clueless to pounding the pavement of the blocks down Broadway, let alone the Upper West Side, because I was used to being barefoot at the beach.

Back then, I signed up for the opera - not knowing anything about opera. My family was somewhat poor, even in wealthy Sarasota, so I did not grow up with ballet, museum, performing arts, or even movie theaters. Not even music in the home... simply just a car radio. No wonder I used to love singing in the car - until my brothers would quickly change the 8-track cassette to stop me from singing...

I got my choice for opera - some show called Madama Butterfly - interesting name, I thought back then, but what's opera?! Had no idea where I was going and what I was going to see... Some singing performance -that's about all I was briefed...

Watching Madama Butterfly at "the" Metropolitan Opera at Lincoln Center in the heart of NYC was my very first experience of opera! Wow! It was captivating and breathtaking! The scenery and costumes were stunning, while I had never heard such exquisite voices and from real opera divas!

Lincoln Center is located on Broadway at West 66th Street and is comprised of primarily three main buildings: New York City Ballet (famous for Nutcracker, which I also experienced during my Columbia days with college student discount), Metropolitan Opera (which not only faces Broadway, but is prized for world-renown opera), and Avery Fisher Hall (the site for symphony of all symphonies). But thanks to the recent redesign by architects from Diller Scofidio and Renfro, Lincoln Center has been transformed to its glory, including the magnificent 83' long pedestrian passageway (above West 65th Street) engineered by Dewhurst Macfarlane and Partners.

Ironically, during my first week of college in the oh-so-intimidating Manhattan, I dined at an outdoor Columbia Engineering Student-Alumni luncheon with professors and sat next to what I considered the oldest man at this event! I had departed Sarasota - known for its plethora of retirees and snowbirds - so with my weird luck I get to sit next to the non-vocal, retired-looking gentleman who was there to eat and not chitchat. Half way thru our meal, I knew nothing to ask any professor, so I turned to my right and asked this old gentleman what he practiced. He muttered something about acoustics. That only confused me more. "Have you worked on any interesting projects?" I interjected. He simply stated "the acoustics at Lincoln Center..." - in other words, he worked on the acoustic design! Too amazing! Unreal experience. The old guy turned out to be Cyril M. Harris, a Columbia professor in electrical engineering who happened to have designed the acoustics for Lincoln Center's Metropolitan Opera House!

Back in Sarasota about 15 years later after my Madama Butterfly experience at the Met, I signed up for season tickets with the Sarasota Opera through our Rotary Club of Sarasota. But still a newbie when it comes to operatic performances. Our Rotary member Annie Thompson Bartys (a former opera singer in Puerto Rico with her late husband Don Thompson an opera critic) organized wine-and-cheese social gatherings at Dr. Richard Rehmeyer's home a week before each opera night, so she would show us movie clips of the opera and brief us about the story line and types of voices. So I learned about mezzo-soprano and some guy named Georges Bizet...

I fell in love with opera again. Of course, I was the youngest Rotarian participating, but I tagged along, and we would get dessert after the Sarasota Opera outing and chat about the incredible show.

During the Met Opera's wintry season of 2010-11, I flew back to NYC to enjoy my now favorite opera: Carmen by Georges Bizet. I took the wrong guy - my blind date did not really have an appreciation for opera, but he lived in NYC! Oh well, but that did not dampen my spirits walking down the red-carpeted spiral staircase from the mezzanine of The Metropolitan Opera. I felt like a diva - and looked like one too!

So fast forward to 2015 - I happened to be in NYC on Labor Day weekend. Stumbling out of the NY Sports Club locker room, I meet Jill Jackson who excitedly shared that she was going to watch Met Opera in HD. How cool! She meant that night. I'm in! She told me it was free. Even better!

I zoomed out of the gym and headed to Zabar's for my picnic fare - fig and wheatberry salad with baby arugula. Then, I grabbed seat cushions and bug spray (did not need that - I guess mosquitoes are dormant at dusk in NYC!) and hopped on the subway. Jill and I strategically mastered a plan that worked, except I was supposed to get there first to save us seats. I, as a non-New Yorker, unfortunately, forgot my subway MetroCard (because I did not pack it in my gym card when I walked to the gym). Funny how Jill got there minutes before I did and got us two chairs - outdoors at Lincoln Center - front row dead center. Wow! 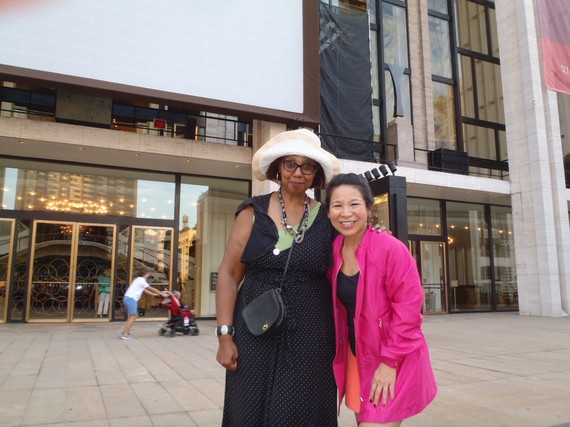 Jill got us orchestra seats, while I brought us seat cushions to comfort our backs or behinds during the 2 hours and 45 minutes performance without intermission. 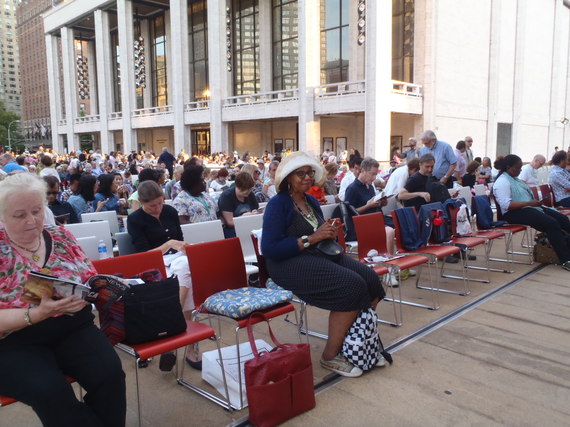 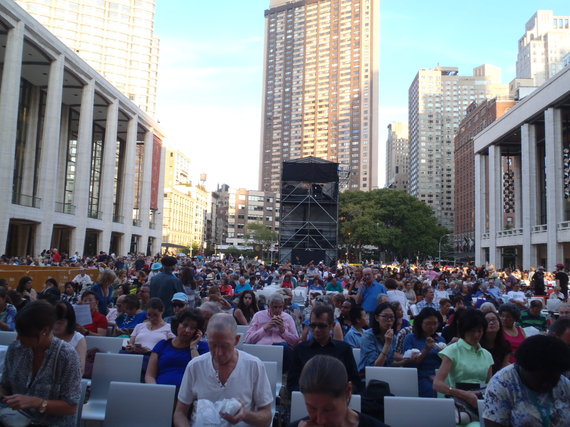 Before the HD screen came on, I walked by the New York City ballet and fountain to get the playbill and a schedule of Met Opera HD Live ("The Met: Live in HD" series shown in 2,000+ movie theaters). 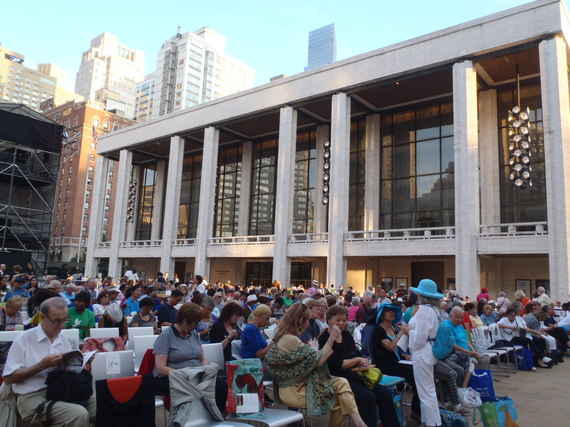 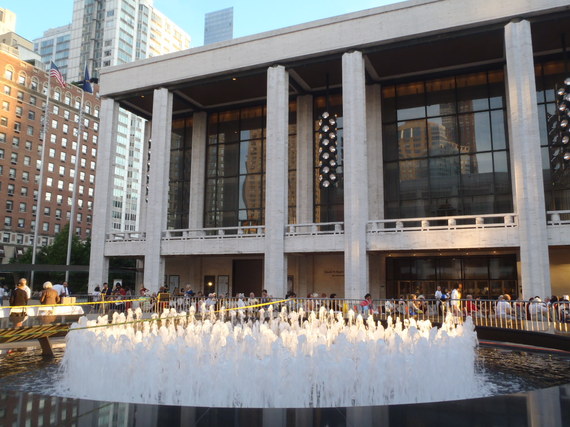 Before sunset, I photographed other spectators waiting, searching for the best seat and even picnicking on the grounds. 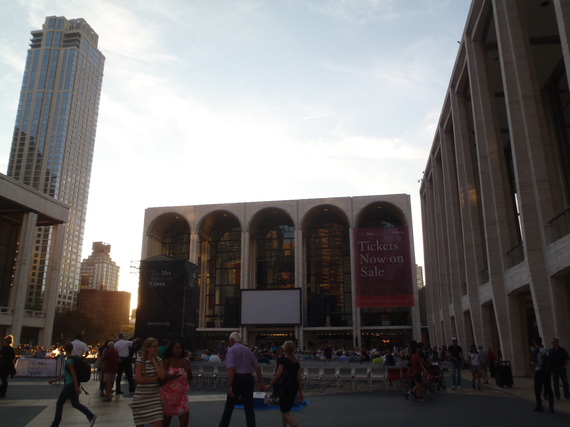 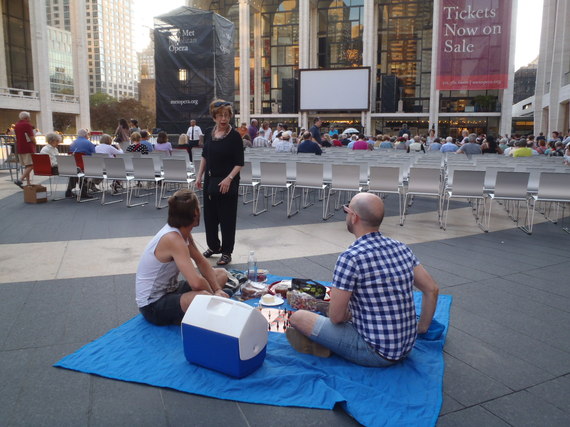 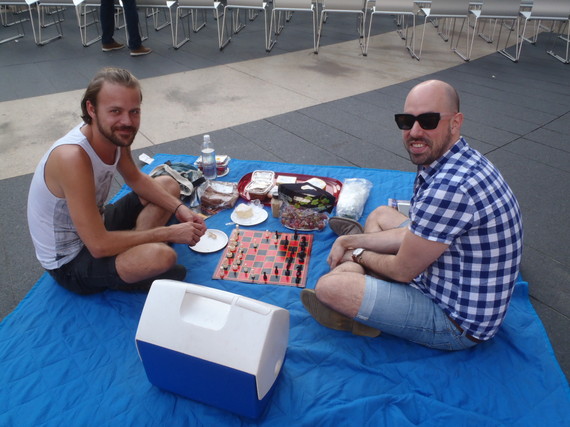 There was a special section cornered off for VIP's: 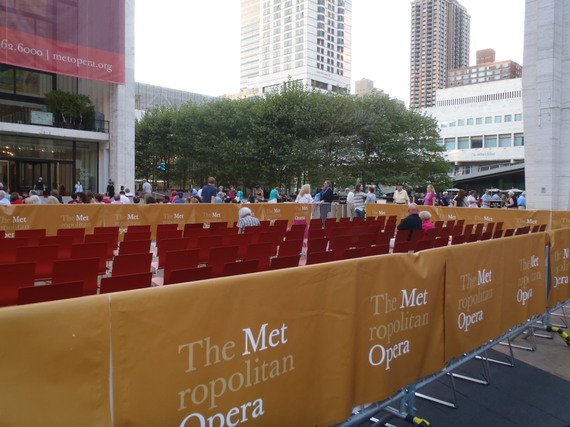 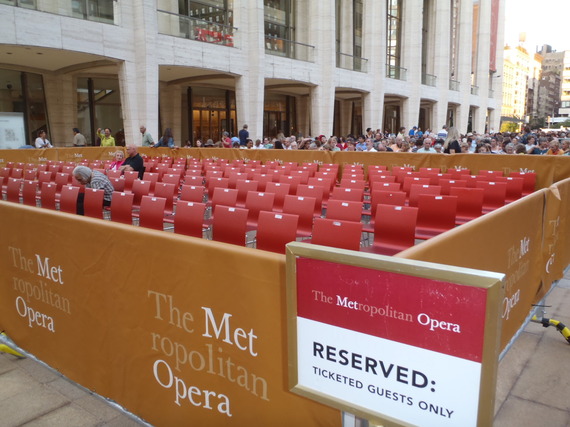 Before they dimmed the lights, we got a sneak peak of upcoming performances - from Puccini's La Bohème... 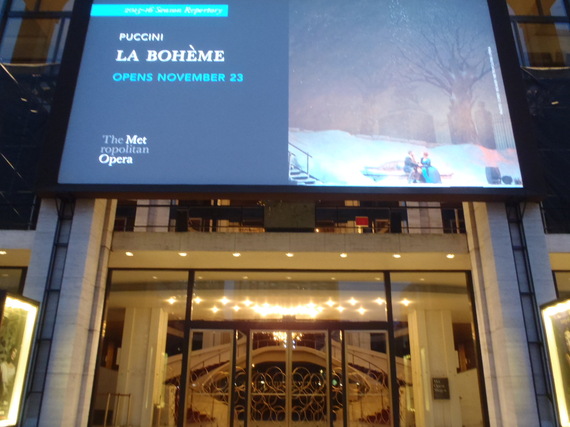 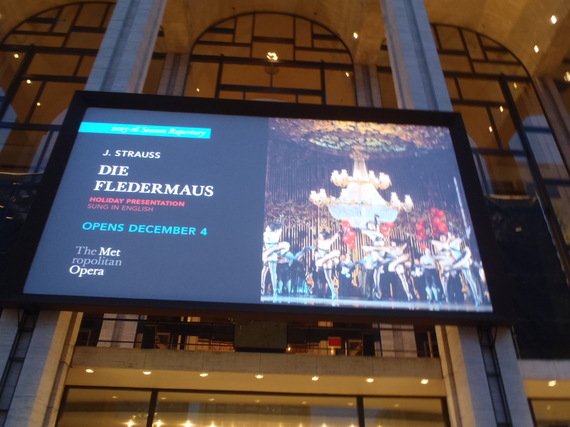 I am a structural engineer in construction, so I was in awe of the buildings surrounding us, especially the Avery Fisher Hall behind me: 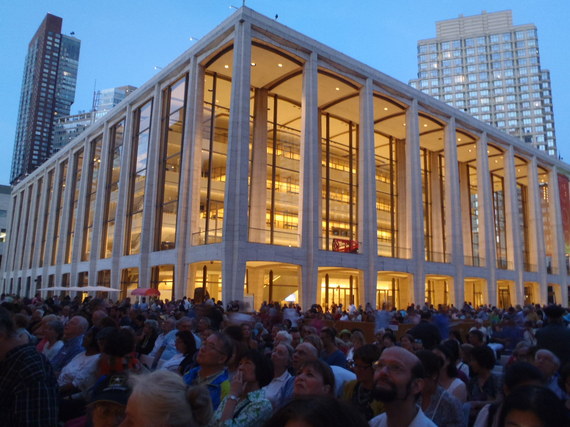 As the sun faded behind the Metropolitan Opera house, 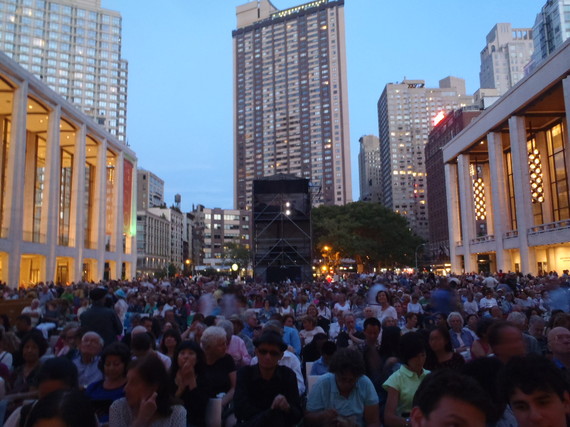 I did a double take - my beloved Madama Butterfly will be performed at the Met starting February 19, 2016: 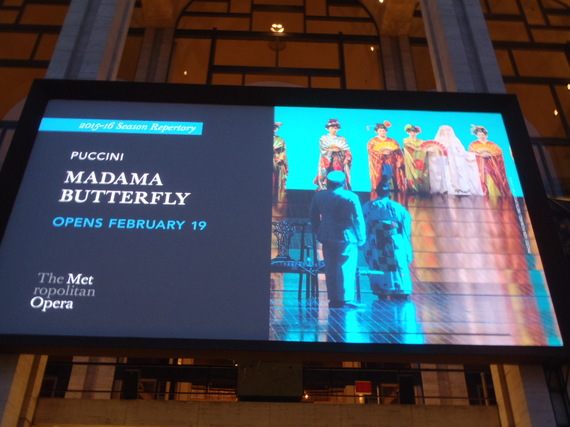 The other thrilling announcement was the "Opening Night at the Met" live of Otello in Times Square on HD screen - and it's free on September 21, 2015. I'll be back in sunny Sarasota then, but dreaming of dramatic tenor and baritone voices. 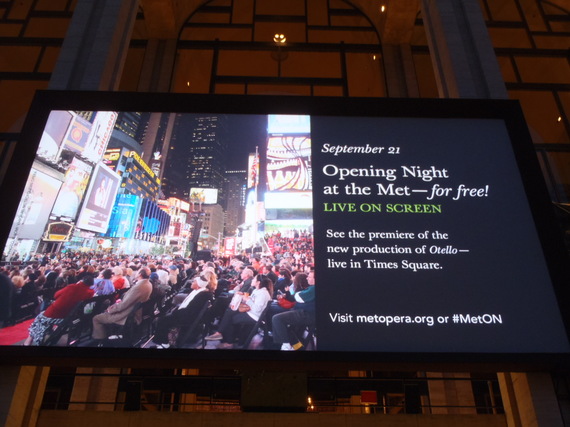 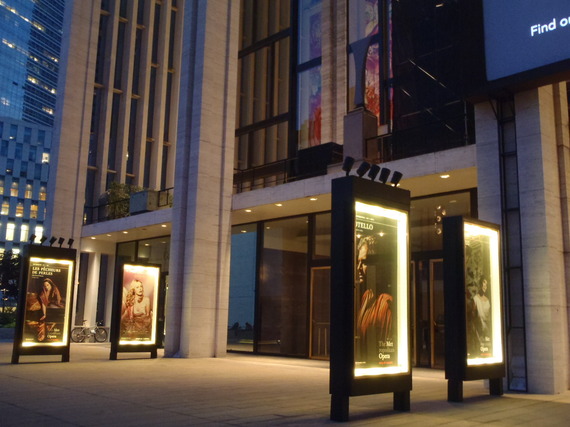 Lights went out, and I became a believer of live opera on an HD screen! Wolfgang Amadeus Mozart's Don Giovanni captivated the audience with great acting, remarkable costumes and incredible singing! 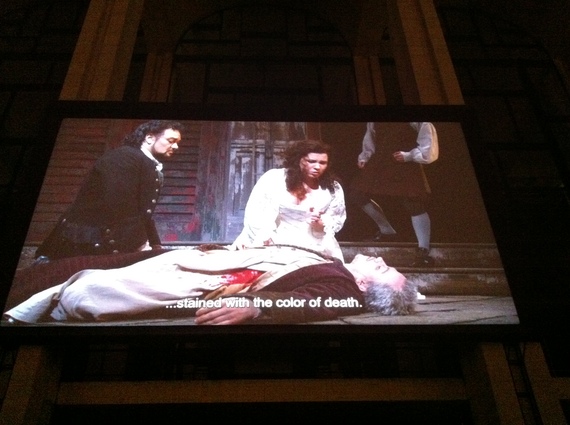 I adored the greatcoat worn by Don Giovanni (played by Mariusz Kwiecien) and the sweet voice of Mojca Erdmann, who portrayed the peasant woman Zerlina - in this 2011 performance of Don Giovanni: 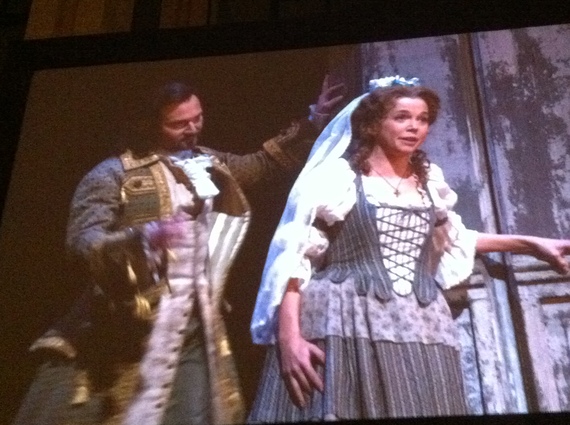 There was no intermission around 9:15 p.m. after Act I, so some audience members darted. I stayed past 10:45 p.m. and then breathed in more gratitude for the front row center seat and stellar performance... 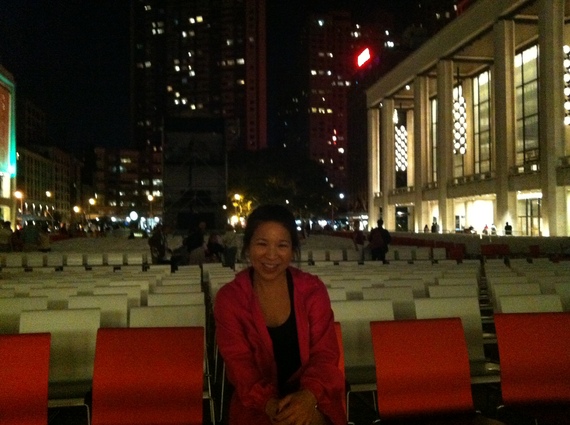 I could not help but be mesmerized by the beauty of the architecture that surrounded us at night... so I bid adieu to the NYC Ballet building: 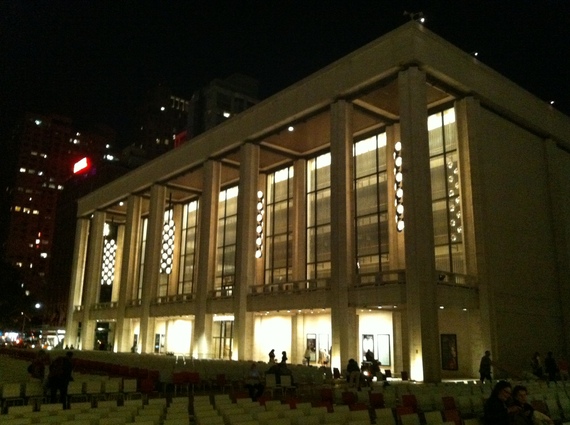 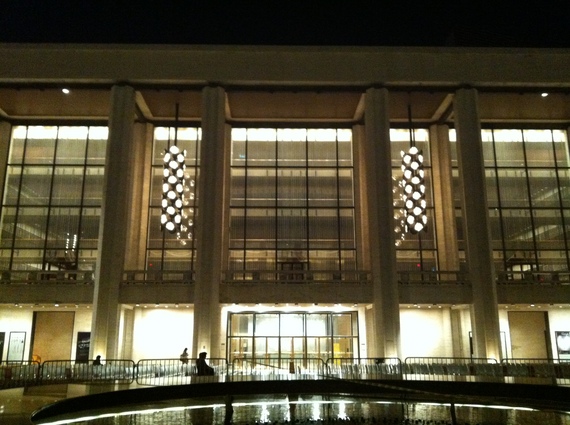 and the historical Avery Fisher Hall: 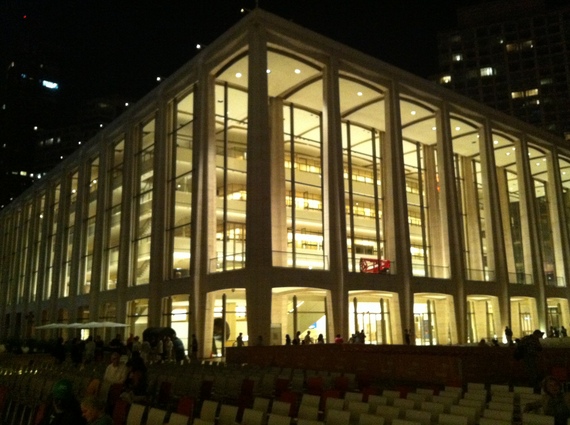 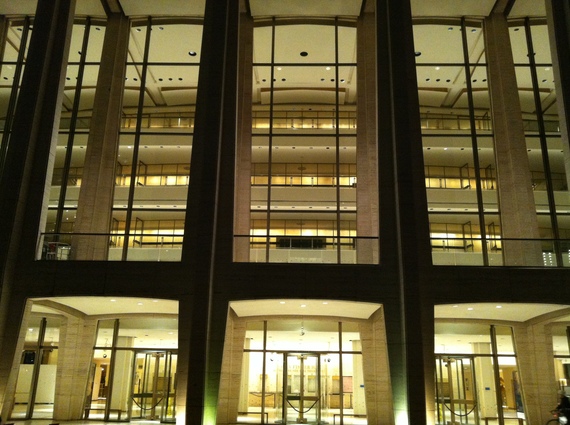 I bowed back at the magnificent Metropolitan Opera House and grinned knowing that I will be back another night, perhaps within the next year - inside enjoying the glamour and artistes who made it in the world of opera!