Ayotzinapa: Murdered students and the Police-Army-Criminal links of the new PRI.

On October 2, 1968, Mexico's President, Gustavo Díaz Ordaz, ordered the Mexican Army to open fire on student organizers gathered in Mexico City's Tlatelolco Plaza. The coldly calculated murder of hundreds of students was the linchpin of an operation aimed at destroying a powerful movement that was rapidly galvanizing opposition to the regime far beyond the nation's campuses.

After the massacre, the government launched a dirty war, focused on Guerrero, hunting down those who continued to resist. They also commenced a cover-up of the massacre that lasted for decades. But Mexico's students and democratic opposition never forgot and coined the slogan: El dos de octubre no se olvida (October 2 will never be forgotten).

This year, a horrendous echo of those long-ago events is again roiling Mexico. 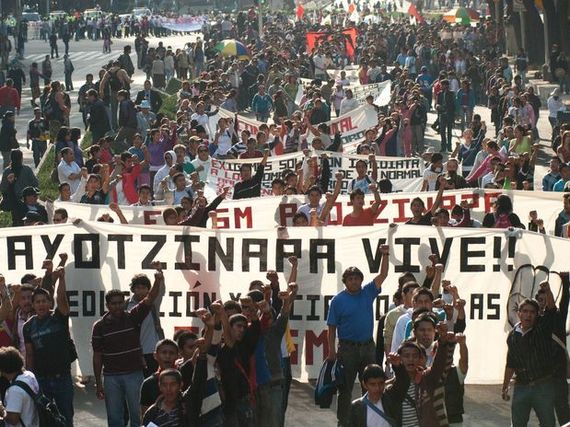 On September 26, a group of first-year students at the Ayotzinapa rural teachers' college in the southern state of Guerrero went out to raise money after their first day of classes. Their goal was to help fund contingents for travel to the 46th annual commemoration of the Tlatelolco massacre in Mexico City.

The Ayotzinapa College, founded in 1926, has long been a bastion of youthful dissent in a violent and repressive state. Nevertheless, protests by unarmed students against the authorities were traditional and followed predictable rules. Students knew that the President and his party wanted to do away with their school. None could have imagined the horror to follow.

One long-standing technique of public college students in Guerrero and elsewhere around the country is the "boteo," in which participants block a roadway to solicit semi-voluntary contributions from drivers. Another is to commandeer local buses for the students' use. Both have the power to annoy, but never before have they been met with the kind of murderous attack that ensued that night after an unsuccessful evening of fundraising.

As three busloads of students crossed the city of Iguala around 9 p.m., they were ambushed: Uniformed men in police trucks firing automatic weapons pursued and then pinned the students down a few yards away from the avenue that would take them out of town. During this first attack, which lasted for about 90 minutes, uniformed municipal police forced 25 to 30 students off one of the buses, made them lie face down on the street, and then drove them away in police trucks. During this time, there was no visible reaction from the local Army base of the 27th Infantry Battalion, less than five miles away.

When the firing stopped and police had departed, neighbors, teachers, more students from Ayotzinapa, and a few local journalists gathered at the crime scene. Some of the students began preserving evidence of the attack, like spent gun shells and blood smears in vehicles and on the street. A spontaneous press conference began as reporters asked a student representative from the teachers' college about what had happened. Then, just after the reporters asked the student his name, gunfire resumed. Masked men killed two more people while others fled for their lives into nearby streets and over fences.

The journalists and locals who had gathered all managed to escape, but attackers abducted 13 to 20 more students along the side streets. The following morning, around 10 a.m., one student's dead body was found near the site of the attack. He had been brutally beaten. His killers removed his face, eyes and ears. 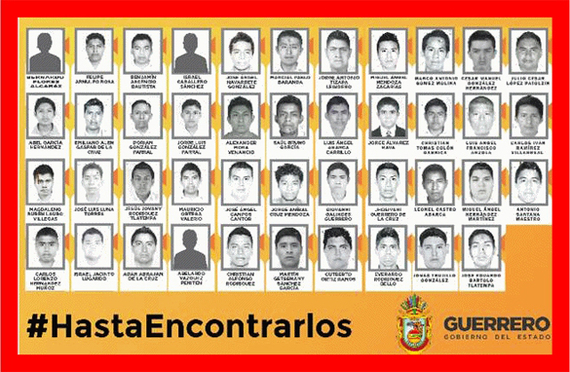 At the time this publication, none of the 43 "disappeared" students have been found. Many fear the worst.

What does this all mean? Among the hundreds of thousands of Mexicans pouring into the streets or protesting at Mexican consulates around the world, few doubt that it means the horrid nexus of collaboration between police, military, and criminal actors has come out into the open. 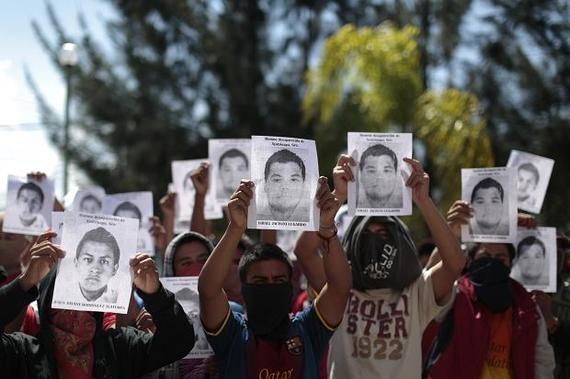 Please feel free to print out and use this this flyer or pass it around electronically.