Masked luchadores in bright capes and skin-tight pants will enter the ring to fight a battle of comic book proportions on the evening of Valentine's Day. Only with a little more striptease thrown into the good vs. evil.

Since 2003, Lucha VaVoom, a troupe who engages in high-flying Mexican Lucha Libre wrestling matches with an intermission of burlesque dancers (a.k.a. buxoticas: they provide the va-voom), continues to entertain a growing cult following at the historic Mayan Theater in Los Angeles.

This isn't your typical Valentine's Day date. But if you manage to catch this year's Lucha VaVoom's Valentine's Day engagement, 'Lucha is for Lovers', this wild performance guarantees a stimulating night.

Two of the three shows are sold out and a few tickets remain for Thursday night. 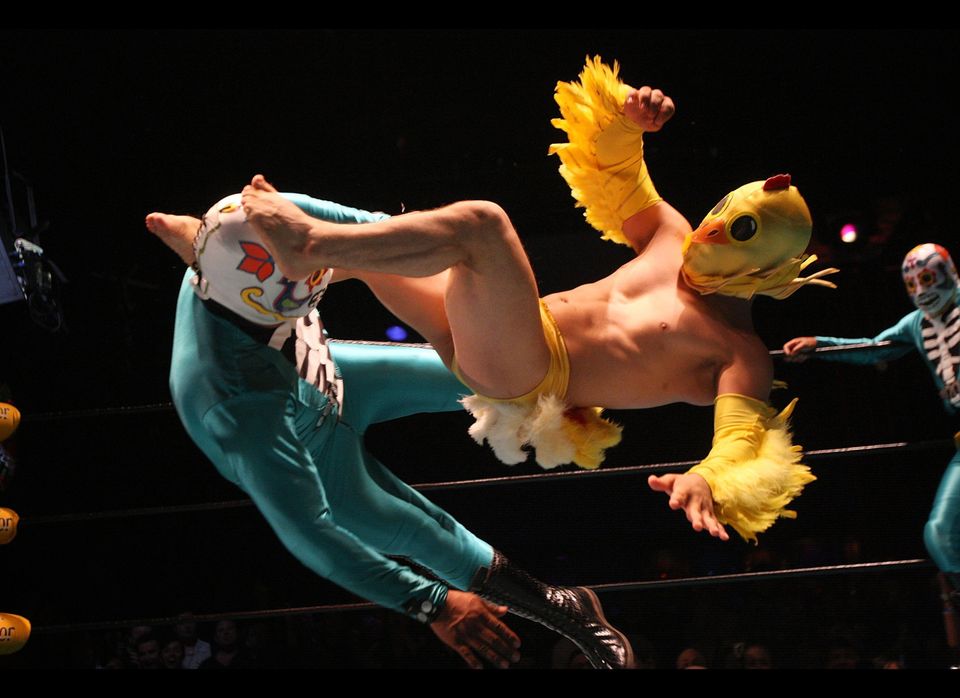 1 / 13
Lucha VaVoom Cinco De Mayan Show
LOS ANGELES, CA - MAY 05: Lil Chicken and one of Los Cavaleras luchadores, traditional Mexican wrestlers, perform at the Lucha Vavoom Cinco de Mayan! show at the Mayan Theater on Cinco de Mayo, May 5, 2009 in Los Angeles, California. Lucha Vavoom combines elements of theatrical Mexican masked wrestling shows known as Lucha Libre with American burlesque. Cinco de Mayo, or May Fifth in Spanish, celebrates the unlikely victory of 5,000 ill-equipped Mestizo and Zapotec Indians led by General Ignacio Zaragoza over the the much better-equipped French forces at the Battle of Puebla on May 5, 1862 in Puebla, Mexico. In the US, Cinco de Mayo is often mistakenly equated with Mexican Independence which was on September 16, 1810. (Photo by David McNew/Getty Images)
Getty