The stone had been sliced at the neck, like a decapitation, and buried in a ritual that was common at the time, the National Anthropology and History Institute said in a statement.

There are indications that the 1.65-meter (5-foot-4) tall statue, which depicts a bow-legged ballplayer with his arms crossed, was built onto an I-shaped ball game field before it was buried and could be more than 1,000 years old.

Mesoamericans would paint objects in red and "kill" them by breaking them as offerings for rituals at the end of calendar cycles.

The monument was discovered in the pre-Hispanic site of Piedra Labrada, which includes five ancient ball fields in which teams battled to put a rubber ball through a circular stone by bouncing it on their hips.

The statue may have been carved by the Mixtec indigenous group around the year 600.

Archeologist began to dig in the Piedra Labrada site more than a year ago and have since found 50 medium-sized buildings of up to five meters in height as well as around 20 sculptures ranging from snake heads to snails and humans with animal features.

The ball game fields along with temples and public squares show that Piedra Labrada was a "city with an important ritualistic role," the institute said. 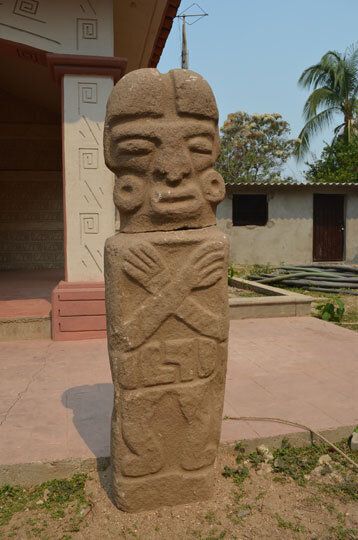 1 / 5
This photo handout shows a statue discovered by villagers in the Piedra Labrada site in Mexico. (INAH)
INAH