For all the attention the second recapture of drug lord Joaquín "El Chapo" Guzmán Loera has received, it would appear that the future of Mexico’s drug war depends on this one man.

It doesn’t. Capturing the leader of Mexico's largest drug trafficking organization was an important event, but many experts predict it won’t do much to change the fundamental dynamics of a drug war that has left more than 100,000 people dead in Mexico over the last decade.

Here are six things going on in Mexico that show how far the drug war’s impact extends beyond Guzman and his Sinaloa cartel.

The Jan. 2 Assassination Of Gisela Mota

Texmico Mayor Gisela Mota, who had pledged to challenge local drug gangs, was beaten and killed in her home just one day after she took office. The exact reasons behind Mota’s killing remain unclear, but authorities say they suspect the Los Rojos drug gang ordered the killing and have arrested three men for the crime.

The incident highlights the dangers facing local elected officials in Mexico: Nearly 100 mayors have been assassinated in the decade that has passed since former President Felipe Calderón launched an assault on the country’s drug cartels.

Humberto Moreira, the former head of the ruling Institutional Revolutionary Party (PRI), was arrested in Spain this month on money laundering allegations. Moreira has maintained his innocence and was released from jail on Friday, but authorities withheld his passport and barred him from leaving the country while he’s under investigation. News reports say investigators suspect he is tied to the violent Zetas cartel.

The former governor of Coahuila has long faced allegations of embezzling state funds, as public debt in the state skyrocketed more than 100 times in six years under his leadership, to some $35 billion. He has not faced criminal proceedings in Mexico, although members of both major opposition parties have urged the attorney general’s office to investigate the allegation of colluding with the Zetas.

Moreira’s case is not unique. Some 15 Mexican governors have faced corruption allegations since 2000, according to Mexican daily Reforma. Three of them were jailed, although only one remains in prison, the publication reports. Corruption is a widespread problem in Mexico that makes it difficult for policymakers and law enforcement to rein in drug traffickers.

Homicides On The Rise

Mexico registered a 7.6 percent increase in the number of homicide victims last year, reversing a three-year trend in which killings had decreased. While officials had been quick to celebrate the decreasing rate of homicides from 2011 to 2014, the setback in 2015 shows that they officials have a long way to go before containing the country’s drug war violence.

The Forced Disappearance Of Thousands

The U.S.-backed dictatorships of Latin America instituted the brutal practice of abducting suspected political opponents, often killing them and leaving no trace of their bodies. Spanish speakers coined the term "desaparecido" -- someone who is "disappeared" -- to describe the phenomenon. Mexico has registered some 27,600 such forced disappearances in recent years.

Human rights groups like Amnesty International say Mexico’s security forces have in many instances carried out forced disappearances, including those of 43 teachers college students in the town of Iguala. That case has become the rallying cry of an international protest against President Peña Nieto's administration, and the impunity Mexican security forces enjoy more generally.

One way Mexico hopes to confront crime and corruption is by revamping its criminal justice system, a years-long reform effort aimed at professionalizing the police and improving the courts. A central piece of that reform is the implementation of oral trials to replace the current system, which largely relies on written testimony submitted to a judge who decides the case behind closed doors.

The change is moving slowly. As of November, only eight states had implemented the new system for federal proceedings, leading to only two trials “like those in the movies,” according to Reforma. The deadline for the transition has been set for July 18.

"It probably will take a generation to see real results from this system," Octavio Rodriguez, a legal scholar with the Justice in Mexico Project at the University of San Diego, said last week at a panel in Washington, D.C. "The ones who are going to be the key difference, the ones who will really generate this change, are the students, the ones who are now in the law schools in Mexico."

Guns From The U.S. Pouring Into The Country

Some 70 percent of the firearms authorities in Mexico confiscated between 2009 and 2014 originated in the United States, according to a Government Accountability Office report published this month. Most were purchased legally at shops or gun shows in the U.S. Southwest and trafficked illegally into Mexico, the report says. Nearly half of U.S. gun shops depend on Mexican demand for their survival, according to a 2013 joint study by the University of San Diego’s Trans-Border Institute and Igarapé Institute.

Mexican officials have long pressed the United States to limit gun sales in an effort to stem the flow of illegal weapons. Both the current administration in Mexico and the one that preceded it have fruitlessly appealed to elected officials in the U.S. to reinstitute the country's assault weapons ban that expired in 2004. The GAO report, however, also cites corruption among some Mexican law enforcement as a major barrier toward cooperation to slow the flow of gun trafficking. 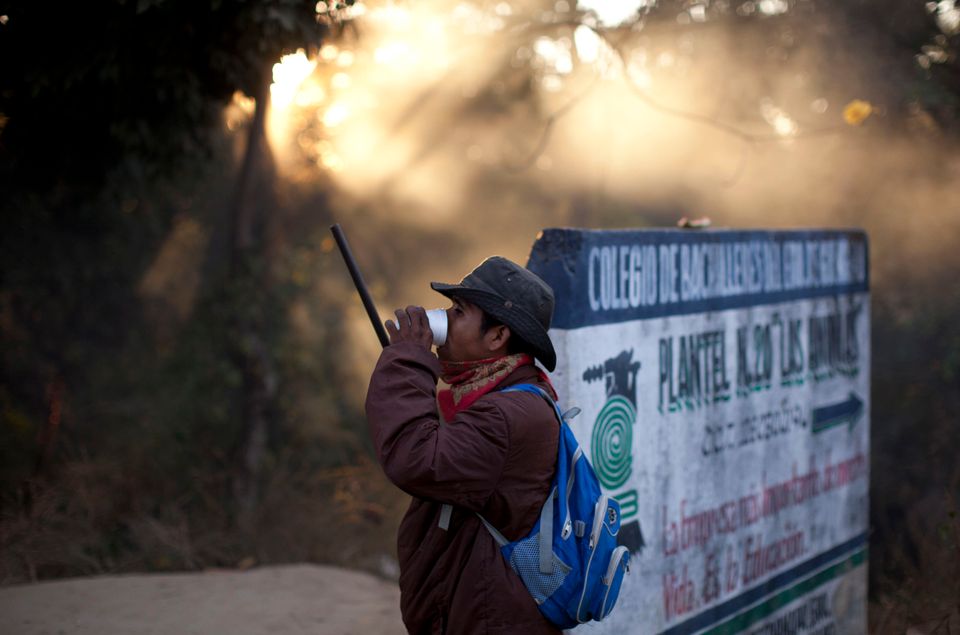