By the standards of the past three decades, Mexico's economic performance since 2010 has given much room for optimism. Headlines such as "Mexico's Moment" and "The Aztec Tiger" are now as ubiquitous as those which not too long ago painted Brazil as the region's economic darling. Yet among the glowing macroeconomic numbers is one which casts doubt on whether Mexico is really living up to its newfound expectations: foreign direct investment (FDI). Despite three years of strong growth, a cheap currency, and NAFTA to back it up, FDI in Mexico is at its lowest (relative to GDP) since 1993. Explaining this paradox may give some insights on what to expect on the investment front in the next few years.

Since the signing of NAFTA in 1994, much of Mexico's appeal has been in each successive government's policy of being open for business. At least on the trading front, the strategy has had measureable success: Mexico today has one of the world's largest networks of free trade agreements (with 43 countries) which aside from NAFTA, also include the EU and Japan. Its ratio of trade-to-GDP is three times higher than Brazil's and is even higher than China's. Perhaps the biggest testament to the Mexican economy's post-NAFTA transformation is the fact that it alone accounts for nearly two-thirds of Latin America's total exports of manufacturing goods.

But on the investment front, the results have been less spectacular as of late. Since NAFTA, FDI to Mexico has averaged a decent 2.6% of GDP, peaking at $31.5 billion in 2007 before the 2009 global recession slashed it in half. But despite the economy's recovery, it has remained stagnant since. In 2010, GDP grew by 5.4% but FDI recovered to just $20 billion, still a third below its peak. In 2011, it actually declined to $19.5 billion despite being another year of robust growth. Worse yet, the story for 2012 will likely be similar as only $13 billion was received in the first three quarters of the year. Barring some miraculously high influx in the last three months, FDI will come in this year at its lowest as a share of GDP since 1993, the year before NAFTA was implemented. 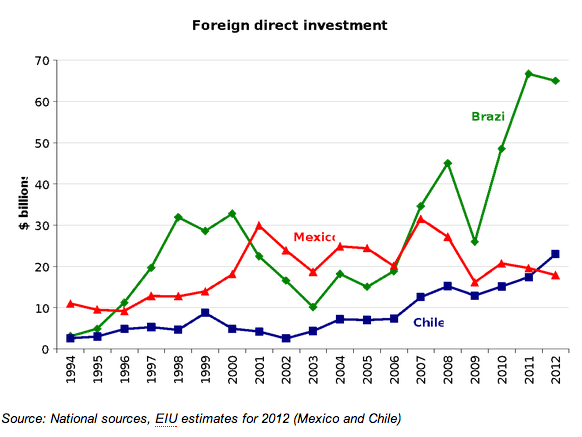 If the Mexican economy is doing so well, why is FDI so low? Brazil, which will struggle to grow this year much above 1% received a whopping $65 billion while Chile, an economy just one-fifth the size of Mexico's has received nearly $18 billion in the first three quarters. In fact, investment from Mexico abroad has actually exceeded the amount received at home -- a rarity among developing countries. There is no single explanation which accounts for his phenomenon but three peculiar features of the Mexican economy come to mind.

An alternative (and more optimistic) explanation is that the weak FDI inflows during 2010-12 are simply a temporary phenomenon. FDI is a lagging indicator, which means that the poor results in the past three years might simply be reflecting the weak pre-crisis economy -- in Brazil's case, FDI didn't really take off until 2007, after a few years of solid growth. From this perspective, an uptick in Mexico could well be on the horizon. Indeed, carmakers including Nissan, Audi, BMW and Mazda have already announced a myriad of investments in the coming years, seeking to benefit from Mexico's competitive advantages such as proximity to the US, a weak currency, and wage costs which are no longer at a major disadvantage to those in China. Expect other sectors to follow suit.

Although FDI in itself is not a panacea for growth, in such a large and open economy as Mexico's, it is undoubtedly a gauge of how attractive the country is in the eyes of the rest of the world -- and certainly a better long-term measure than portfolio flows, which Mexico has received in abundance ($57 billion in three quarters, compared to just $16 billion in Brazil for the whole year) but which are potentially short-term and speculative. Mexicans even have an unflattering name for them: capital golondrino, a term that evokes vivid memories of sudden capital flight during the 80s and 90s.

As it is, Mexico's poor FDI numbers stand as an unsightly smudge in what is an otherwise encouraging macroeconomic picture. There is encouraging evidence to show that this can change for the better over the next few years. But if it doesn't, Mexico's Moment may not end up living up to the hype.