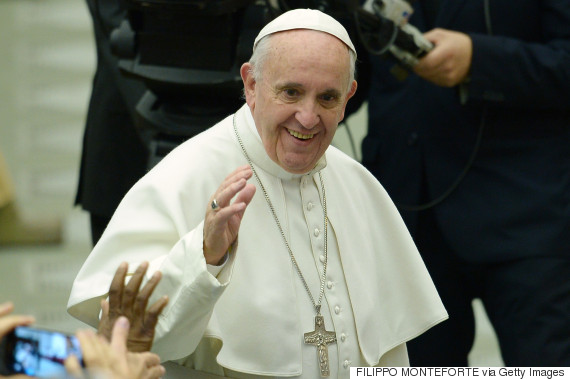 Pope Francis greets the crowd as he arrives for a meeting with religious for the conclusion of the Year of Consecrated Life at Paul VI audience hall on February 1, 2016 at the Vatican.

Pope Francis's upcoming trip to Mexico is arguably the most important national tour of his dynamic papacy. Recalling his primary role as Evangelist-in-Chief, the Argentine cardinal became the first Latin American pope as part of an effort to reverse massive Catholic decline in the region, which has been going on for the past four decades. Despite the mass exodus of Catholics, mostly to Pentecostalism and the burgeoning ranks of the religious nones, Latin America is still home to 40% of the world's 1.3 billion Catholics. And the regional giants of Brazil and Mexico have the first and second largest Catholic populations in the world. Francis's trip to Rio de Janeiro for World Youth Day 2013 sought to energize the world's largest Catholic Church, which now claims only 61% of the Brazilian population. In Mexico Catholic decline hasn't been as sharp, with 81 percent still claiming Catholic identity. However, tougher religious competition, mainly from Pentecostals and the burgeoning cult of the skeleton saint Santa Muerte, has been of great concern to the Mexican Bishops' Conference since the mid-1980s.

Whether directly or indirectly, the major themes of the papal visit aim to reinvigorate the world's second largest Catholic Church and increase its social and political influence. In a country where some 100,000 have lost their lives in the decade-long drug war, narco-violence will figure as one of the salient themes during the week-long papal visit. Though he doesn't receive much media attention for it, the Argentine pontiff is a major anti-drug crusader who recently warned his native country to avoid "Mexicanization," or deepening narco production and influence.

Two of the cities on his itinerary have been epicenters of the bloody battle for control over access to the U.S., the largest and most lucrative drug market on earth. In fact, the sole reason for his visit to my wife's hometown of Morelia is because it's the state capital of Michoacan where virulent narco-violence centered in the Tierra Caliente (Hot Lands) region has claimed thousands of lives and terrorized the population. More than a few parish priests in Tierra Caliente have put their lives on the line in their strong condemnations of cartel members and support for the paramilitary self-defense groups featured in the Oscar-nominated documentary, Cartel Land. If Morelia now has the first cardinal in its history, Alberto Suarez Inda, it's because the Pope of the Periphery promoted him from archbishop a year ago due in large measure to his frequent and vigorous denunciations of narco-violence perpetrated mostly by La Familia Michoacana and Knights Templar cartels.

Condemnation of narco-violence and solidarity with its victims will also be a major theme in Juarez, the notorious border town that was known as Baghdad on the Border until recently. Drug violence combined with religious competition might result in a papal condemnation of Santa Muerte, the Mexican folk saint, who is viewed as the leading narco-saint, the poster girl of the culture of death, by not only the Church but also by mainstream media and the conservative National Action Party (PAN), founded in the 1930s by Catholics.

While narco-violence is a theme peculiar to Mexico and several other nations, the topic of migrants and refugees has been at the top of Francis's overall agenda, be it Syrian refugees in Europe or Latin American immigrants in the U.S. In the Mexican context migration includes two distinct groups, Mexicans who cross the dangerous border into the U.S. at places like Juarez and Central Americans fleeing nations with the world's highest murder rates, mainly El Salvador, Honduras and Guatemala, who enter Mexico through the southernmost state of Chiapas en route to the U.S. Many of us are familiar with horror stories associated with Mexican migrants who make perilous treks through the desert and are sometimes robbed, raped and left for dead by unscrupulous coyotes (human traffickers). For many Central American migrants, such as one of my wife's students from Honduras who saw her coyote murdered in Guatemala, the hardships increase exponentially with omnipresent threats of robbery and violence on their journeys through Central America and Mexico. More progressive sectors of the Church in Mexico have expressed solidarity with the Central American migrants through shelters and charity work. Pope Francis will undoubtedly call for more just and humane treatment of both Central Americans in Mexico and the U.S. and for Mexicans in the latter.

In addition to his Christian convictions, the Evangelizer-in-Chief has a compelling reason to take special interest in a group that is key to the future of the U.S. Catholic Church, the world's fourth largest. The latest figures from Pew Research show an unprecedented decline of Church affiliation over the past decade, falling from 24% to 21% of the American population. If until the past decade the Catholic Church had avoided the precipitous decline of mainline Protestants, such as Presbyterians, Methodists and Episcopalians, it was because a steady inflow of Latin American immigrants, predominantly Mexican, compensated for the exodus of Euro-American parishioners from the pews. For a Church that is close to 40% Latino, the recent reversal of migration patterns in which more Mexicans have returned to Mexico than have come to the U.S. doesn't bode well for a Church that is suffering its first significant membership loss.

One of the possible reasons for slower Catholic decline in Mexico is the paramount importance of the Virgin of Guadalupe, the premier advocation of Mary worldwide in terms of both territorial coverage and number of devotees. La Virgen Morena (brown skinned Virgin) isn't only Queen of Mexico but also Empress of the Americas, watching over Catholics from Canada to Argentina. And her supremacy transcends the realm of religion as she is the most prominent symbol of Mexicanness. A common refrain in Mexico is "Mexicans are 90% Catholic but 100% Guadalupan." From skateboards and tortillas to tattoos on inmates, the image of the mestiza Virgin is omnipresent in Mexico. Despite his penchant for the periphery, the Argentine pope, who is strongly Marian, will visit the national capital, Mexico City because that's where the Basilica of the Virgin of Guadalupe is located. His visit there will be one of the defining moments of the trip and should boost his favorability rating a few points from its current 72%, five points below the wildly popular Pope John Paul II.

While all four places on the papal itinerary have their significance and strategic value, Chiapas stands out as the most crucial. The state of Chiapas as the poorest, most indigenous, least Catholic, most Protestant and the port of entry for Central American migrants encapsulates the papal agenda in Mexico. The one group of Mexicans that has most abandoned the Church are the country's indigenous peoples who constitute approximately 10 percent of the population. A major part of the rationale for the recent canonization of Saint Juan Diego, despite evidence that he never existed, was to have an indigenous saint that could aid in retaining membership among the Mayans, Nahuas, Purepechas and scores of other Native peoples. San Juan Diego hasn't become that popular of a saint and has failed to stanch the continuing conversion of indigenous Catholics to Pentecostalism. 23% of Chiapans are Protestant, predominantly Pentecostal, and 64% are Catholic. In many ways Chiapas's religious landscape resembles neighboring Guatemala's more than Mexico's. Unlike the Protestant competition, the Catholic Church has been slow to recruit and train indigenous priests who can minister to their flocks in their native languages.

In an effort to reach out to the Mayan communities of Chiapas, Pope Francis will undoubtedly highlight the role of the great Dominican "Protector of the Indians," Bartolome de las Casas, for whom the historic Chiapan city San Cristobal de las Casas is partially named. Many Latin American Liberation Theologians point to de las Casas as the godfather of their primarily Catholic theology toward which Pope Francis has increasingly gravitated over the past three years. This controversial theology posits a preferential option for the poor and the building of God's kingdom here on earth in the form of more just and equitable societies. Led by the Liberationist bishop Samuel Ruiz, San Cristobal was at the center of Liberation Theology in Mexico during its heyday in the 1980s. Some of the Zapatista guerrillas who took up arms against the government in Chiapas in 1992 were influenced by Liberationist ideas.

Having closely observed his papacy, especially here in the Americas, I'm intrigued to see how his ambitious agenda plays out on Mexican soil. I'm confident that for the reasons explored above, his trip to one of the great heartlands of global Catholicism will be remembered as among the most significant of Pope Francis's unparalleled papacy.