Homero Aridjis is a Mexican poet and environmental activist. His seminal work is "1492: The Life and Times of Juan Cabezón of Castile." In 1985, he organized the Group of 100 -- a group of prominent artists and writers, including Octavio Paz, Gabriel Garcia Marquez and Rufino Tamayo -- to defend biodiversity in Mexico and Latin America.

MEXICO CITY -- Every winter of my childhood in Contepec, Michoacan, millions of orange and black monarch butterflies magically arrived to the oyamel fir forest at the summit of Altamirano Hill. When the sun was out, rivers of butterflies would stream through the streets in search of water. Altamirano was one of the five mountain ranges protected by the original 1986 decree that created the Monarch Butterfly Special Biosphere Reserve, for which I had petitioned Mexican President Miguel de la Madrid. In 2000, another decree enlarged the reserve's size and added protection for more butterfly colony sites.

I was born in 1940 and grew up with (and wrote about) the monarchs, but it was only in 1975 that their overwintering forests in central Mexico's Transvolcanic Belt were "discovered" by Canadian scientists.

On Jan. 29, news was released of a dramatic plunge in the monarch butterfly population that overwinters in Mexico after flying thousands of miles south from the northern and eastern United States and southern Canada. This season's population, calculated by measuring the area of occupied trees, covers a tiny 0.67 hectares -- the smallest ever since these measurements began 20 years ago -- and a huge drop from the 1996 high of 21 hectares. The population has plummeted from an estimated 1 billion in 1996 to 33 million this year, scattered over seven sites. There have been no monarchs in Contepec for years.

In the past, most of the blame for the steady decline in monarch numbers has been placed on logging in the core and buffer zones of the reserve, out-of-control tourism and devastating climate events such as the 2002 storms in Michoacan or the severe 2011 drought in Texas. Now, it has become all too apparent that industrial agriculture in the U.S. Corn Belt (and less in Canada) is largely responsible for the dizzying drop in butterfly numbers. In the last decade, there has been a huge increase in additional land planted with corn to satisfy the demand for federally-mandated corn-based ethanol.

The main culprits are the herbicides relentlessly applied to genetically modified corn and soybean plants (grown from Monsanto's Roundup Ready seeds, among others) that guarantee sterile fields where only the engineered crops are allowed to flourish. Ninety-three percent of total soybean acreage in the United States is now herbicide tolerant (HT), while 85 percent of corn is HT. Graphs show an alarming correlation between increased planting of HT crops and dwindling monarch populations, for milkweed -- the only plant on which adult monarch butterflies lay their eggs and the only one the hatched larvae (caterpillars) will eat after devouring their own eggshells -- is a main victim of these deadly glyphosate herbicides.

Common milkweed (Asclepias syriaca), so named for the sticky white sap that oozes from broken stalks, branches or leaves, is a summer-blooming perennial pollinated by insects such as bees, butterflies, moths or ants that land on the fragrant pinkish-purple flowers to suck the sweet nectar. The sap itself is toxic, and when the monarch larvae feed on the leaves, they become toxic to monarch butterfly predators.

Until now, the Mexican government has denied that the monarch butterfly migratory phenomenon is in jeopardy, despite warnings since the 1990s from preeminent monarch expert Lincoln Brower, but for the first time has acknowledged the possibility of its disappearance.

When I was Mexico's ambassador to UNESCO and lobbied representatives of the 21 countries on the World Heritage Committee to vote in favor of including the Monarch Butterfly Biosphere Reserve on the World Heritage List, my colleagues from the United States and Canada were reluctant to do so, alleging opposition from their governments. They finally did give their votes, as a personal favor to me, along with the other 19, and the reserve is now listed.

During negotiations for the inclusion of the environment in the North American Free Trade Agreement, as head of the environmentalist group the Group of 100, I proposed the adoption of the monarch butterfly as the ideal symbol of tri-national interdependence and cooperation. Now, on the 20th anniversary of NAFTA, I (and all who cherish the monarch butterfly) am urging Presidents Enrique Peña Nieto and Barack Obama and Prime Minister Stephen Harper to put monarch survival on the agenda of their February 19-20 summit meeting in Toluca, in the state of Mexico, a scant thirty miles from the Piedra Herrada monarch colony at San Mateo Almomoloa.

To make up for the vast loss of grasslands to crops and urban development, we need a milkweed corridor stretching along the entire migratory route of the monarch -- with plantings on roadsides, in fields and ditches, along railroad tracks, in pastures and meadows and gardens, in parks and public spaces -- so that successive generations of monarchs can breed during their journey north. An abundance of nectar patches with flowering plants for the great-grandchildren of the previous year's butterflies to feed on as they fly southward to Mexico should not be so difficult to arrange.

The decline in monarch population since 1994 coincides with the NAFTA years. If our three countries cannot prevent the extraordinary monarch butterfly migratory phenomenon from disappearing, then what's the point of this agreement?

We cannot allow the monarch butterfly to figure in the coming era of extinctions.

Fig. 1. Decline in monarch overwintering area compared to rise in US acreage planted in corn and rise is usage of glyphosate herbicide. To compare these on a similar scale, the monarch hectares have been multiplied by 5, and the glyphosate usage has been divided by 2 data sources: http://www.epa.gov/opp00001/pestsales/, http://www.ers.usda.gov/data-products/agricultural-baseline-database/ 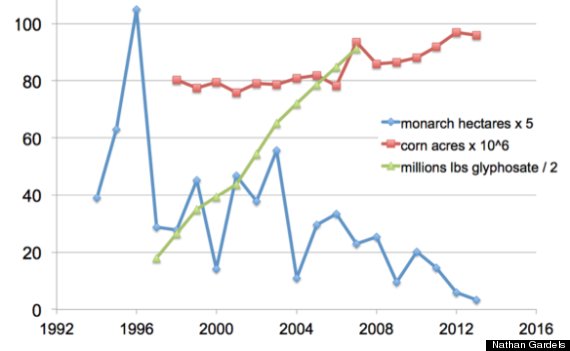 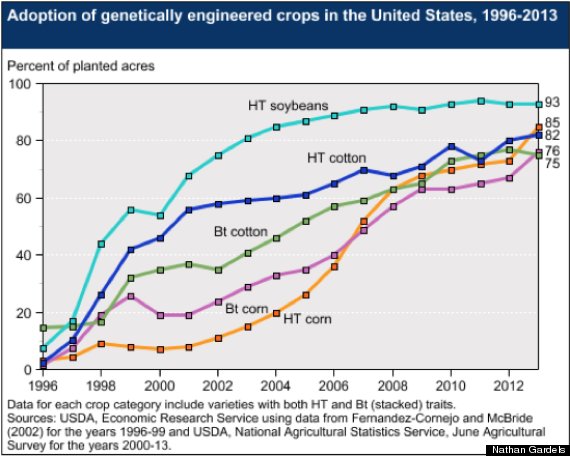