Before the start of the men's soccer gold medal match at the London Olympics, conversation tended toward two topics. The first was the shocking truth that Brazil had never won a gold medal in its signature sport. The second was the absence through injury of Mexico's Giovani dos Santos. Logic seemed to dicate that the latter fact would take care of the former reality.

It didn't take long for Mexico to turn that line of thinking upside down en route to a 2-1 win, clinching the first gold medal in soccer in its own history. In the 29th second of the game, Mexico striker Oribe Peralta capitalized on a Brazilian turnover to open the scoring with a clinical near-post strike. With the early introduction of Hulk from the substitutes bench, Brazil would press for a goal for the remainder of the first half but Mexico held its nerve and its lead into the intermission.

Brazil's 20-year-old Neymar looked at turns -- and pirouettes -- the most elusive, dangerous player on the field but it was Peralta who would net the second score of the game. The 28-year-old forward who plays his club ball with Santos Laguna doubled the Mexican lead in the 75th minute when he got his head on to a cross from Marco Fabian, who fired in cross from a free kick from the right wing that was set up by a foul committed by Marcelo.

Despite holding a 60/40 possession percentage edge (per London2012.com) and taking 19 shots to 12 by Mexico, Brazil lacked the cutting edge in the final third, where there always seemed to be too many green shirts and too many lunging legs with green socks blocking and deflecting shots and passes. For all his individual skills, Neymar was surrounded and smothered before he could get off his shot or thread that final pass on several occassions. Peralta, however, kept carving out space for himself amidst the Brazilian defense marshaled by Thiago Silva. In the 69th minute, he found the back of the net after being correctly whistled for offside. Minutes earlier, Fabian had nearly scored on a bicycle kick that cracked off the crossbar. Not long after both went close to doubling the lead individually, they would connect for the goal that would prove the game-winning score.

Just as the many Mexico fans at Wembley Stadium were beginning to celebrate in earnest, Hulk pulled a goal back for Brazil in injury time. Moments later the bulky Brazilian with the apt moniker swung in a cross from the right wing, setting up Oscar with a clear chance to equalize. Rising, undefended, just yards from the goal, Oscar got his head to the ball but fired it over the crossbar.

After that miss, all that was left was the celebration for Mexico. 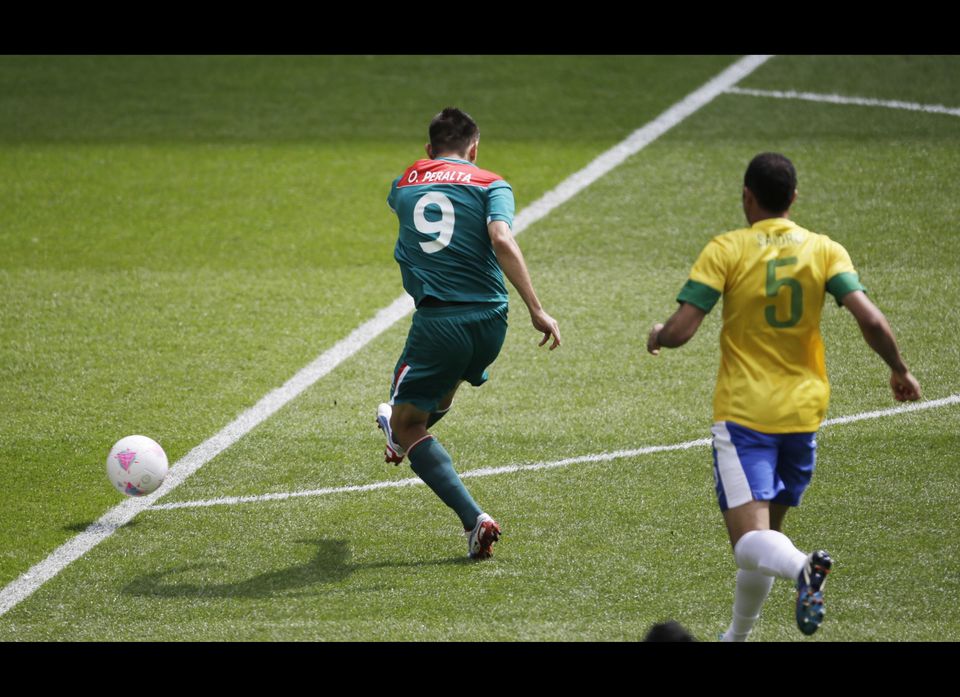