MEXICO CITY -- Expectations are running high for Pope Francis' first visit to Mexico, the Spanish-speaking country with the largest Catholic population. Between his arrival in Mexico City on the evening of Feb. 12 and his departure from Ciudad Juarez five days later, he will visit six cities for meetings, masses, processions and prayers with families, indigenous groups, youth, working people, migrants, victims of violence and the clergy.

The church hierarchy in Mexico, largely conservative and traditionally cozy with the government, nervously awaits the pope's actions and pronouncements. The president of the Mexican Episcopal Conference, Cardinal Francisco Robles Ortega, has stated that the pope wants "to get close to Mexico's men and women to console us in the difficult times we are living through due to insecurity, inequality, poverty, corruption and violence, and to show us the way in compassionate love towards integral development that excludes no one." About 85 percent of Mexico's population identified as Catholic in 2010, down from 96 percent in 1970.

Jorge Mario Bergoglio, the first Jesuit pope, explained that he took the name of St. Francis of Assisi because he was "the man of poverty, the man of peace, the man who loves and protects creation." He added: "How I would like a church that is poor and that is for the poor." Since his election as the 266th pope in March 2013, Pope Francis has become famous as an advocate for the poor, a critic of global capitalism and a defender of the environment. 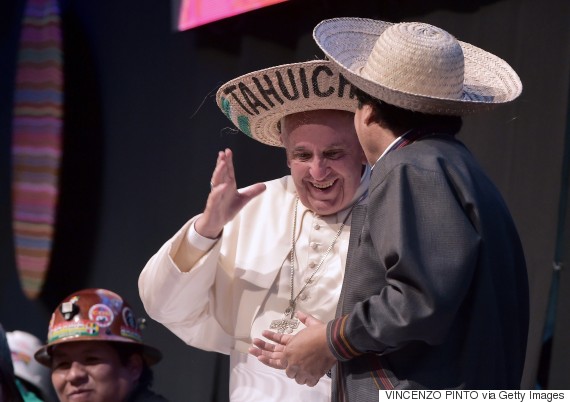 And yet, in an address to Mexican bishops visiting the Vatican in May 2014, the pope, an Argentine and the first Latin American pope, made it clear that "It certainly is not the task of pastors to offer technical solutions or to adopt political measures, which are outside the pastoral realm." The parents of the 43 students who disappeared in the city of Iguala on the night of Sept. 26, 2014 are asking for an informal private meeting with Bergoglio, but according to Alejandro Solalinde, a priest who has received death threats for his defense of migrants in Mexico, the government is exerting considerable pressure to prevent such a meeting.

Five white popemobiles have been blessed in the presidential hangar at Mexico City's airport. In keeping with the pope's wishes, they are not armored, to allow him direct contact with people. Spaced a meter apart, 400,000 volunteers will guard about 400 kilometers of parade routes where millions are expected to gather. About a million tickets are being distributed through the country's 93 dioceses.

On the second day of the pope's visit, he is scheduled to appear to celebrate Mass in Ecatepec, Mexico's second-most populous municipality, which boasts one of the country's highest crime rates and terrible industrial pollution. 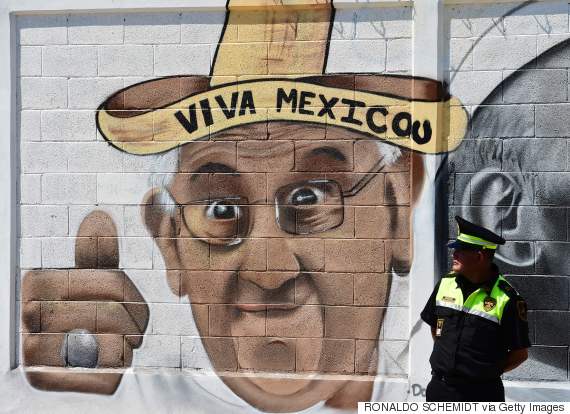 A policeman stands next to a mural welcoming Francis to Ecatepec. (RONALDO SCHEMIDT/AFP/Getty Images)
Advertisement

Earlier this week in Ecatepec, protestors demanded that the security measures put in place for the papal visit be made permanent to combat the daily robberies, kidnappings, extortion, homicide, lynching and a rash of femicides in Ecatepec and elsewhere in the state of Mexico, most of which are not investigated. According to the National Citizens Observatory on Femicide, in 2011 and 2012, almost 1,300 girls and women -- more than half between the ages of 10 and 17 -- disappeared in the state of Mexico, while 448 were murdered, many with gruesome violence. In anticipation of the papal presence, the streets have been cleared of stray dogs and the homeless.

The pope will return to the capital for a meeting at the Pediatric Hospital of Mexico with hospitalized children and their parents, as well as personal encounters with several dozen young cancer patients. Mexico's First Lady Angelica Rivera, a former soap opera star who put together an album of songs for the pope's visit featuring a handful of Mexican pop artists, will be waiting to greet him when he arrives at the hospital.

A visit to Mexico's poorest state

On Monday, Feb. 15, the pope will fly to Tuxtla Gutiérrez, the capital of Chiapas. While photos of the state governor, Manuel Velasco Coello, often flanked by colorfully clad indigenous people, regularly appear in the national press -- hinting at his pursuit of a 2018 presidential candidacy -- the indigenous groups of Chiapas live in chronic misery.

Chiapas is Mexico's poorest state. Nearly 30 percent of the state's roughly 3.5 million people speak one of 56 indigenous languages, and a third of those speak no Spanish. In the 16th century, Bartolomé de las Casas, the first resident bishop of Chiapas and one of the earliest defenders of human rights in the Americas, evangelized the local population in their own languages. After a Mass with the indigenous community of Chiapas in the city of San Cristobal de las Casas, Francis will go to the magnificent baroque cathedral to visit the tomb of Samuel Ruiz, the former bishop of Chiapas who took up the tradition of Las Casas and for decades was one of the great defenders of Indian and human rights.

Ruiz was beloved and mourned by the native peoples he staunchly defended and who called him "Tatik" -- "father" in Tzotzil. He was a proponent of the liberation theology movement in Latin America that advocated the involvement of the church in social change, principally among the poor; Francis has embraced the movement and he is at one with Ruiz in a love for the poor. 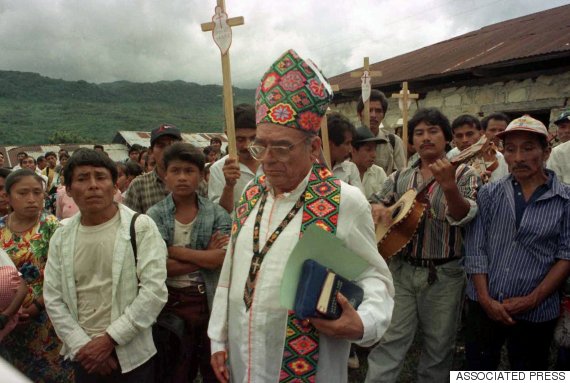 Ruiz in the town of Benito Juarez in Nov. 1997, not long after he barely escaped an ambush by members of a paramilitary group. (AP Photo/Pascual Gorriz)

Evangelicals, Pentecostals and other Christian denominations have made inroads in Chiapas, the least Catholic of Mexico's states, where the religion is practiced by only 58 percent of the population and Indian beliefs are mixed with Christianity. There is even a burgeoning Muslim community, with four mosques on the outskirts of San Cristobal. The pope is also expected to give his blessing for the use of indigenous languages for celebrating Mass.

Chiapas southern border is also a main entry point for migrants, most of whom are fleeing lawlessness and criminal gangs in the "northern triangle" of Central America -- El Salvador, Guatemala and Honduras. During their perilous crossing through Mexico in hopes of reaching the United States, the migrants are victims of violence, sexual abuse, human traffickers, drug gangs and members of the armed forces and the police.

'The peace of the tomb'

The lush state of Michoacán, stretching from thickly forested mountains to the Pacific coast, has been ravaged by drug violence for years. In September 2006, a cartel called La Familia (The Family) hurled five human heads onto the dance floor of a nightclub in the city of Uruapan with the message "The Family doesn't kill for money. It doesn't kill women, it doesn't kill the innocent, whoever is meant to die, dies, everyone must know that this is divine justice." Three months later, shortly after taking office as the president of Mexico, Michoacán native Felipe Calderon declared a war on drug cartels that has taken more than 80,000 lives since then, and 26,000 have disappeared. In 2011, La Familia splintered and another messianic cartel, Los Caballeros Templarios (The Knights Templar), was born. Self-defense militias then sprang up in the state, in the absence of government action.

In the Jan. 31 issue of the weekly magazine of the Archdiocese of Mexico, there was an editorial about the unprecedented and unchecked violence in Mexico. The piece singled out Michoacán:

Neither a new administration nor development plans will prevent the blood from continuing to flow in violent Michoacán, overwhelmed by crime and the anarchy of insecurity resulting from a power vacuum. Plans for pacification are in contrast to the desperation of Michoacán's residents, who are faced with a seemingly limitless thirst for blood. There were 52 violent homicides in January, and 290 in three months. In Michoacán, there is only the peace of the tomb.

This is the panorama awaiting Pope Francis when he arrives in the Michoacán capital, Morelia. Last week, Francis sent this message to Mexico via the news agency Notimex:

Meanwhile, an organization of indigenous communities in Michoacán issued a statement that reads, "For over 500 years, the original people of the Americas have been ransacked, robbed, murdered, exploited, discriminated and persecuted." The statement calls on Francis to apologize for the mass slaughter of 25 million indigenous peoples in the Americas, adding that "the Bible was the ideological weapon of the Conquerors.

However, in Bolivia in July 2015, the pope did just that, telling a gathering of activists:

A prayer for migrants

The pope's final day in Mexico will be spent in Ciudad Juárez, a border city notorious for the brutal murders of hundreds of mainly poor young women whose mutilated bodies were often dumped in the desert. In a country that venerates the Virgin of Guadalupe, will the pope speak out to defend the rights of its women?

Francis will pray at the Rio Grande for migrants who have died attempting to enter the U.S. Just across the border, a group of some 600 "migrants, refugees, victims of violence, unaccompanied minors, seasonal farmworkers, people awaiting deportation, and the poor" will assemble to receive the pope's blessing. Might Francis visit somehow improve the lot of the desperate thousands eager to escape Central America and Mexico, and even have a positive impact on immigration reform in the U.S.? 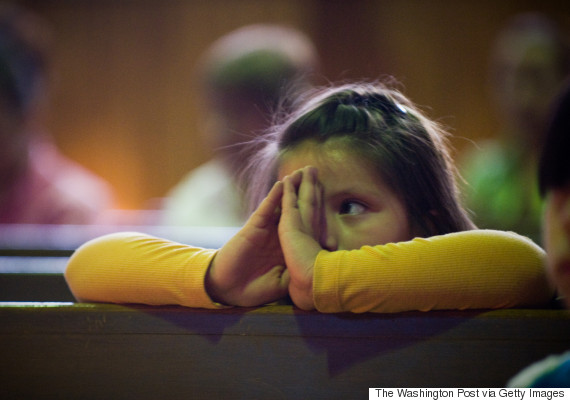 At San Lorenzo Church in Ciudad Juarez, people visit the chapel to pray and leave their wishes on a bulletin board. (Sarah L. Voisin/The Washington Post/Getty Images)

According to statistics released by the Vatican, which noted that Mexico "is the most dangerous country in Latin America for clergymen," there have been 47 recorded attacks against members of the clergy in the past 24 years.

Raul Vera, the outspoken and rebellious bishop of Saltillo (Coahuila) has high hopes for the papal visit. Himself a recipient of threats, Vera says:

Each day the shadow of death spreads over us all, whether priest or taxi driver, thanks to the impunity reigning in Mexico... Mexico is one of the most ruined countries in the world; here mercantilist dictates have been obeyed to the letter, big business has taken over the country and many areas are prey to violence.

While the pope cannot and will not be a deus ex machina nor the answer to Mexico's myriad problems, his visit will surely give hope and inspiration to millions. If he does speak out, it will serve to shine a powerful light on the violence, pervasive corruption, social inequality and injustice in my country.