(Reuters) - Mexican President Enrique Pena Nieto on Sunday condemned violent protests over the apparent massacre of 43 students after demonstrators set fire to the door of his ceremonial palace in Mexico City on Saturday night.

Tens of thousands of Mexicans have taken to the streets to protest the government's handling of the case of the missing students, and last night protesters in central Mexico City set fire to the door of the National Palace.

"It's unacceptable that someone should try to use this tragedy to justify violence," Pena Nieto told reporters at the airport in Anchorage, Alaska where he was en route to China. "You can't demand justice while acting with violence." The students were abducted by corrupt police in southwestern Mexico in September. Though the government said on Friday it looked as though the students had been killed, then incinerated by gangsters working with the police, it stopped short of confirming their deaths for lack of definitive evidence. 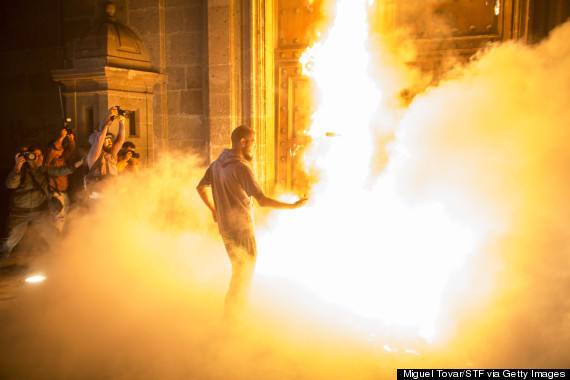 A man sets fire at the door of Mexican Government Palace during a spontaneous demonstration after Mexico's government announced on Friday that evidence suggests that 43 missing students were murdered and their charred remains tipped in a rubbish dump and a river in Guerrero, Mexico, on November 08, 2014 in Mexico City, Mexico. (Photo by Miguel Tovar/LatinContent/Getty Images)

Pena Nieto's trip to China has infuriated protesters and relatives of the students, who believe he cares more about Mexico's business interests than trying to deal with the gang violence that has ravaged much of the country for years.

The trip to China has faced problems since before it began.

On Thursday night, Mexico abruptly canceled a $3.75 billion contract to build a high-speed train line that it had awarded to a Chinese-led consortium after opposition lawmakers accused the government of rigging the process.

The group led by the China Railway Construction Corp were the sole bidders for the project and lawmakers said the government had acted to help the consortium and its Mexican partners, some of which have close ties to the president and the ruling Institutional Revolutionary Party, or PRI.

The government denied the accusations.

Grupo Higa was one of the Mexican partners in the rail consortium and on Sunday a local news site noted that a subsidiary of the company, Ingenieria Inmobiliaria del Centro, had built a $7 million seven-bedroom house for Pena Nieto and his family just before he became president.

The house, which features marble floors and underground parking, has never been disclosed in financial records that Pena Nieto has made public and it is in fact still owned by the Grupo Higa subsidiary, the report from Aristegui Noticias said. 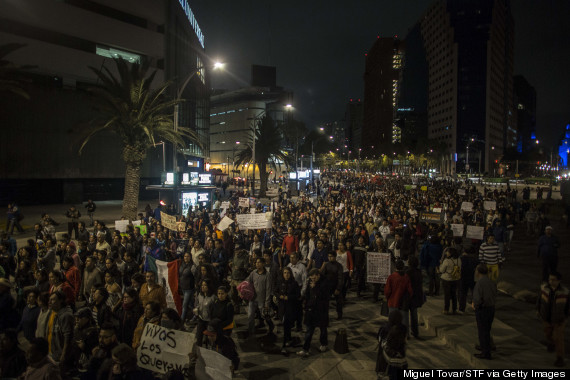 Thousands of people protest against Mexican president Enrique Pena Nieto during a spontaneous demonstration after Mexico's government announced on friday that evidence suggests that 43 missing students were murdered and their charred remains tipped in a rubbish dump and a river in Guerrero, Mexico, on November 08, 2014 in Mexico City, Mexico. (Photo by Miguel Tovar/LatinContent/Getty Images)

However, the president's office said in a statement on Sunday that the house was acquired in 2012 from Ingenieria Inmobiliaria del Centro by Pena Nieto's wife, actress Angelica Rivera, and that she spoke openly about the property last year.

Another protest took place on Sunday, which included people who had walked more than 100 miles to Mexico City from Iguala, Guerrero, where the missing students were abducted. The protest congregated peacefully in the central Zocalo square.