MEXICO CITY -- Many things changed after the devastating September 19, 1985 earthquake, measuring 8.1 on the Richter scale, struck Mexico City. Mexico's president was Miguel de la Madrid, champion of a failed "moral renewal" campaign, and the city's mayor was Ramón Aguirre Velázquez, a man close to the president and a candidate to succeed him.

That September morning, the monolith that was the Institutional Revolutionary Party (PRI) began to crumble, along with tens of thousands of buildings, while the phantom of systemic corruption rose up among the ghosts of many thousand dead. "The tragedy that devastated us yesterday has been one of the worst ever in the history of Mexico. There are hundreds of dead and wounded. We don't have the exact or final numbers yet," Miguel de la Madrid said in his first message to the Mexican people, 36 hours after the earthquake struck at 7:19 a.m. Thirty years later, no one can explain why the President of the Republic kept silent for a day and a half, unless he was struck dumb morally.

In his absence, Mexico's Tenochtitlan Federal District was taken over by its inhabitants. During the President's disappearance, people discovered that the city was vulnerable: electricity, water, gas, telephone and transportation services were all affected; people streamed into the streets to rescue relatives, friends and anyone else trapped in the ruined structures and to search for the missing. Burials of the dead began. Heroes emerged from the crowd, such as La Pulga (The Flea), who risked his life digging through the ruins to find survivors. At the Tlatelolco housing complex, among volunteers trying to find family members buried under the remains of the 13-story Nuevo Leon building's 288 apartments, Plácido Domingo dug through the rubble with his hands trying to find his aunt, uncle, nephew and grandnephew, but they had perished. On Sept. 23, the Group of 100 declared to the media that, "Now more than ever it's glaringly obvious that corruption is a disastrous builder. The number of public buildings, including government offices, public housing, schools and hospitals, that were destroyed in the earthquake is alarming. However, it's not by chance that the Historic Center in downtown Mexico City, built to last, survived both earthquakes."

That 19th of September, civil society found itself, learned to stand on its own feet and lost all fear of becoming organized and confronting government officials, who were seen as inept and corrupt. Ironically, Guillermo Carrillo Arena, Secretary of Urban Development and the Environment and the architect in charge of supervising the construction of several hospitals where hundreds had died, became head of the National Reconstruction Fund until February 17, 1986, when he was replaced as Secretary by Manuel Camacho Solís.

News flew through the streets: a building had fallen onto the Pino Suárez subway station, the Hotel Regis had collapsed and caught fire, taking guests and employees with it, hundreds of buildings were flattened, the dead were far more numerous than officials acknowledged, photos taken by various journalists had been confiscated by the government, censorship was in place. Like foul-smelling dust, rumors spread over the ruined streets, while many people were still trapped. The victims had faces and names. Survivors' stories became known. The homeless took up residence in parks. Funeral homes and cemeteries filled up. Among the grisly discoveries were bodies of prisoners who had been tortured by the judicial police and seamstresses who had been working in shocking conditions.

Since 1985, presidential power has splintered and some has trickled down to a host of political parties, including the three main parties --PRI, PAN (National Action Party), PRD (Party of the Democratic Revolution) --- and the opportunistic PVEM (Ecologist Green Party of Mexico), plus a volatile offering of smaller parties. This past July's midterm elections featured the PANAL (New Alliance), MORENA (National Regeneration Movement), headed by former Mexico City mayor and two times presidential candidate Andrés Manuel López Obrador, Movimiento Ciudadano (Citizen Movement), Encuentro Social (Social Encounter), Partido del Trabajo (Labor Party) and Partido Humanista (Humanist Party), with the resulting electoral expenditures. The last two have already lost their registry, joining a dozen that have disappeared during the past 18 years. The power of Mexico's 31 state governors, who behave like feudal overlords, has increased.

In 1985, people lost their fear of and respect for government officials, regarding them with mounting distrust. Commissions were appointed to study a possible relocation of the capital, but it never got beyond the commissions. Grassroots organizations sprang up: the Neighborhood Assemblies (Asamblea de Barrios), the Unified Coordination of Earthquake Victims (CUD) and groups defending the environment and human rights. Women and indigenous peoples began standing up for themselves. There were schisms within the PRI and several prominent members formed the National Democratic Front (FDN), a precursor of the PRD. In 1988, it is widely believed that the PRI lost the presidential election, but during the count "the system crashed" (the official reason) and contender Cuauhtémoc Cárdenas' victory was stolen. Hordes of protestors and street vendors took over the Zocalo, and President de la Madrid retreated from the National Palace to govern from Los Pinos, the presidential residence.

Rebelling against the Secretariat of the Treasury and the banks, on August 25, 1993, a debtors' coalition called El Barzón organized marches, rallies and sit-ins in the capital and several states in protest against voracious financial institutions. On January 1, 1994, the day the North American Free Trade Agreement came into effect, the Zapatista Army of National Liberation (EZLN) rose up in protest against the Mexican government, revealing two Mexicos, one that looked towards the United States and Canada, the other, composed of indigenous peoples who are marginalized and face discrimination. Mexico City became the city of demonstrations; hundreds take place every year, mostly against the government.

From the absolute power of PRI presidents, in 2000, we moved on to the virtual power of PAN president Vicente Fox, the lord of the sound bite. Never before did a sitting President of the Republic need have recourse to self-promotionals to sell his achievements to an incredulous population, all at the expense of public funds, of course. Fox was followed by fellow PAN member Felipe Calderón, who ramped up the disastrous war on drug cartels that has already claimed as many as 150,000 lives. The PRI returned to power in 2012 with Enrique Peña Nieto, and images of politicians hungry for the top spot in 2018 are already proliferating in the printed and electronic media.

Three decades later, Avenida Juárez is on the way to regaining its former splendor. Other streets in the city have never recovered, such as Chihuahua, home to surrealist painter Leonora Carrington until her death in 2011. Across the street from her house, the remains of a ten-story building, ostensibly a solid mass, have been colonized by squatters. "It's a monument to incompetence," her husband would say. In 1995, on the tenth anniversary of the catastrophe, a congressman declared that 15,000 buildings over six stories high were "death traps." The vacant lots left by the disaster, which politicians had promised to turn into public parks, were built over by developers or invaded by social groups. That same year, the Legislative Assembly of the Federal District revealed that 1,200 homeless families were still living in 24 government-run camps and that 300,000 dwellings would be at risk during a future earthquake.

The city has never stopped moving, on the tectonic and social levels. The Michoacán fault, site of the Sept. 19 earthquake, is 125 miles long and 50 wide, and any day now could be the site of another large quake. Thanks to the densification of housing and lax enforcement of building regulations, if another big one happens there may well be more victims than 30 years ago. Although building codes have become stricter since 1985, only when the next big quake strikes will we know which of the thousands of buildings that have gone up in Mexico City during the last 30 years have been built following the rules, as they will remain standing and unscathed.

Meanwhile, during the past year, the entire country has been rocked by a major quake: the as yet unexplained forced disappearance in the state of Guerrero last Sept. 26-27 of 43 students from a teachers' college in Ayotzinapa. Former Attorney General Jesús Murillo Karam's televised January 27th revelation of what he called "the historical truth," that members of the Guerreros Unidos cartel had mistaken the young men for members of a rival drug gang and had incinerated their bodies on an open air garbage dump outside the town of Cocula, pulverized the remains, stuffed them into plastic bags and thrown them into a river, has been given the lie in a report issued on Sept. 6 by the Interdisciplinary Group of Independent Experts that has been investigating the students' disappearance and the confirmed murder of six people. Relying on expert findings, the group has stated that incineration of 43 bodies on the dump is physically impossible, and there is no evidence whatsoever on the unguarded crime scene to indicate that this took place. Satellite images of fires presented by the Attorney General date from previous years or a later month last year. The "historical truth" has gone up in smoke. Throughout the year and in every state, citizens, lead by the students' families, have been publicly and massively protesting this horrific crime and demanding a full investigation, barring no holds and with questioning of the army allowed, of the events that fateful night. Next Saturday, on the anniversary of the Ayotzinapa students' disappearance, demonstrations will be held all over Mexico and abroad.

The 1985 temblor that shook the foundations of government is seen in retrospect as the detonator of the social earthquake that is still roiling Mexico City and the entire country. To achieve the changes we have been seeing, people had to wake up from centuries of civic lethargy. Nevertheless, the population is still waiting for a truly democratic and equitable Mexico to rise from the ruins of the earthquake. 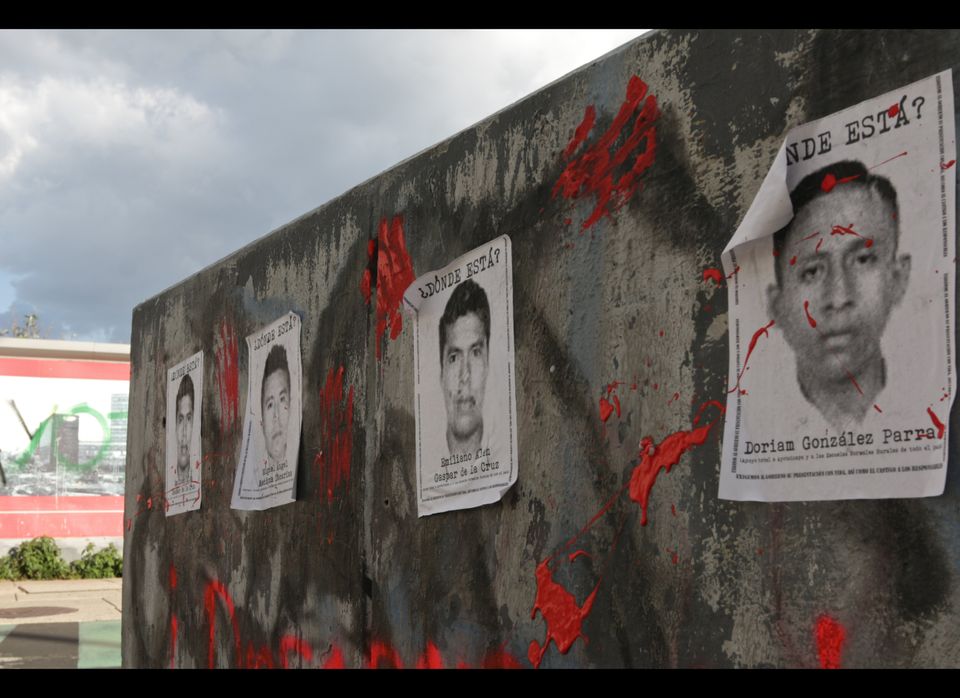