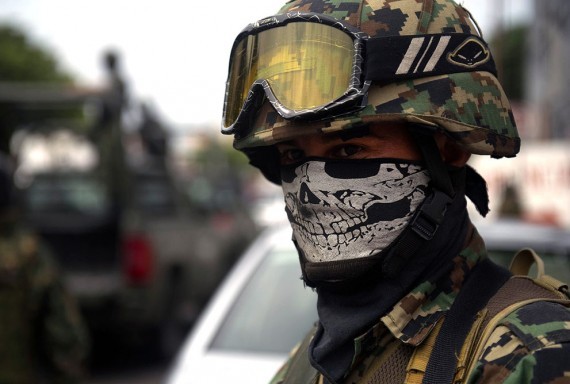 Image Source: Outside the Beltway

The recent capture of two of Mexico's most wanted drug lords in the space of a week has been once again hailed as a major coup in the government's nearly decade-long drug war. However, many security experts as well as ordinary Mexicans remain highly skeptical regarding whether these arrests will have any meaningful effect on the state of criminality and violence in the country. Although the focus has shifted from crime to corruption in recent months, the government of Enrique Peña Nieto still appears unable to find the right formula for making Mexico safer. As a result, for the thousands if not millions of Mexicans who live in violence-prone areas, the prospect of any meaningful improvement to their security and livelihoods remains a far cry.

A Tale of Two Capos

Servando Gómez Martínez, better known as "La Tuta," was undoubtedly one of the most colorful figures in Mexico's criminal underworld. Unlike most capos, who thrive on anonymity, La Tuta made an art of filming and leaking meetings between himself with local politicians, calling radio stations and sending videos to drug-war blogs. As leader of the Caballeros Templarios, he infused his members with some of the same quasi-religious zeal that characterized La Familia Michoacana, the cartel that the Templarios splintered off from in 2011 following an internal rift. La Tuta was not just wanted by the government; he was also the main target of the self-defense militias that formed in 2014 in Michoacán, mostly composed of rural workers tired of his cartel's constant extortions, kidnappings and killings.

In contrast, Omar Treviño, better known as "Z-42," was the latest in line of a string of murderous Zeta drug lords. He is the brother of the previous Zeta leader, Miguel Ángel Treviño ("Z-40"), and both had a reputation for extreme savagery (Miguel Ángel was known for boiling his enemies alive) and held top positions with the Zetas during a time in which the cartel was responsible for some of the most horrific atrocities of the drug war, such as the San Fernando mass killings in 2010-11, as well as the attack on Monterrey's Casino Royale, also in 2011. During this time, the Zetas transformed from mere hitmen into one of the most powerful organized crime groups in the country.

Yet things have not gone well for both the Templarios and the Zetas over the past year. Federal police and the military have increased their presence in Michoacán and, coupled with the rise of the militias, have kept the Templarios on the run. They also face a more competitive environment in southern Mexico thanks to the rise of the Cartel Jalisco Nueva Generación. The Zetas have not fared well either in their struggle against their former employers, the Gulf Cartel, who have held on to key locations or "plazas" in Tamaulipas (their alliance with Sinaloa has paid off) and have lost much of their clout in other states that were previously under their control. Some security analysts, such as Alejandro Hope, have claimed that the Zetas are now running on empty, and the capture or killing of three of their leaders over the past two years will lead to their eventual breakup. One can only hope this is so, but even without the fearsome Zetas as a unified entity, Mexico's security outlooks looks everything but optimistic.

If there is any lasting legacy from the way that cartels like the Templarios and the Zetas operated, it is that diversification is the key to sustained profits in a rapidly changing criminal landscape. In contrast to the more business-like methods of the Sinaloa Cartel, which has remained focused on trafficking, Templarios and Zetas went well beyond the drug trade and ventured into practically every other criminal activity imaginable: extortion, kidnapping, prostitution, human trafficking; both of these groups are even known to have operated mines, and the Zetas have also been involved in the business of public works contracts. Gone are the days where every cartel in Mexico had dreams of being the next Cali, Medellin or Sinaloa. Smaller and localized is clearly safer, more efficient, and less likely to result in the bloodshed that characterized the all-out wars between the Zetas and Gulf cartels (that war is now in its fourth year) or the Sinaloa cartel with the Beltrán Leyva organization, all of which at some point have attempted to establish their dominance over large swaths of Mexican territory.

Of course, this diversification leads to its own set of problems for Mexican authorities. Smaller criminal organizations (as opposed to "pure" drug cartels) may be less prone to commit the mass killings witnessed previously but will hit the civilian population harder. For example, the economic impact of extortion is a huge detriment to business activity, particularly for small and medium enterprises in areas where economic conditions remain fragile from so many years of violence. Likewise, branching out into traditional economic activities opens far more doors for bribery and corruption than before. Whereas previously authorities could simply turn a blind eye to drug trafficking, criminal activity in production and procurement means that practically every aspect of governance can be corroded, particularly at state and municipal levels. The numbers seem to bear out this transformation of crime in Mexico: Throughout the course of the current administration, killings have gone down, but practically all other forms of crime are up, and perceptions of insecurity are consequently on the rise too.

Is There a Solution?

To deal with this new threat, the government requires far more resources than simply boots on the ground, and the experience of richer countries like Italy or even Japan in dealing with their own mobsters suggests that Mexico's criminal groups will not be beaten so easily, if ever. One reality that has come to the forefront since the Ayotzinapa crisis is that a country mired so deeply in corruption like Mexico will not obtain the desired results even under the best intentions of the federal government. (It is questionable whether this is even the case.) Even if resources are doubled or even tripled in the fight against crime, these are likely to fall into a sinkhole of misuse so that only a fraction of these are actually employed to boost the effectiveness of security agencies, let alone the laughably ineffective criminal justice and penal systems.

The easier alternative, therefore, is to find a way of reducing the profits of criminality. Decriminalization of drug use and -- why not? -- a well-regulated legalization of some drugs (marihuana at the very least) would go a long way toward both (1) siphoning off a large share of drug-related revenues and (2) enabling authorities to focus their resources on other high-impact crime, much of which is relatively unsophisticated. For example, most kidnappings in Mexico are so-called "express" kidnappings (lasting just a few hours), and even many prolonged cases (those lasting more than a few days) benefit more from the ineptness and complicity of local police than from the capabilities of the kidnappers. Extortion is without a doubt the high-impact crime that should become the priority and is not an easy one to address. Many forms of extortion, however, are quite low-key as well, being planned from prisons and by petty criminals posing as cartel members. Civil society is finding technology a useful ally against some of these forms of crime, as evidenced by smartphone apps that identify fraudulent numbers and bank accounts. Public security agencies must follow their lead and be more capable of using information and technology to get an edge against the criminals.

It is clear is that while the threat of organized crime evolves, the response by public security agencies must evolve with it. Unfortunately, Mexican authorities have typically been unable to hold the initiative and respond in way that is flexible and innovative. With the political establishment currently more worried about its own survival (or rather, the survival of its way of governing), expecting major improvements in the security outlook is highly unlikely even if the biggest and baddest capos are caught.