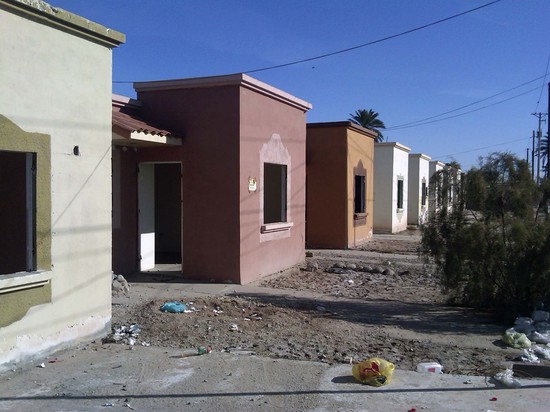 In contrast to the mass of high-rises that characterize the cityscapes of other major Latin American megacities like Sao Paulo and Buenos Aires, the first thing that will strike any first time visitor to Mexico City is the low-rise sprawl stretching almost infinitely in every direction. Over the past decade, the sprawl has gotten bigger, triggered by a government-led rush to construct social housing on an unprecedented scale. The PAN presidents which oversaw the boom, Vicente Fox and Felipe Calderón, hailed it as one of their greatest achievements but today the social housing model lies in ruins, hit by the fallout of the 2009 recession and a growing public aversion to living far from jobs and basic services. With the unlikelihood of a quick recovery, the sector stands to act as a continued drag on economic growth over the next year or two, during which time it will have to adapt quickly to a new housing model that will hopefully cure most of the old model's ills.

In the northern and easternmost fringes of the Mexico City metropolitan area lie some of the country's prime examples of the new social housing communities that spread like wildfire during the PAN years. In contrast to the gray, chaotic mass of self-built slums or the monolithic modernist housing projects that were built in the 50s and 60s, the new communities can be easily distinguished by the colorful uniformity of dozens of small, nearly-identical single-family homes stacked against each other. The premise of a new life in a new home, away from the crime-ridden inner cities was enough to appeal to millions of Mexicans during this this period, who were initially willing to move far into the outskirts (as far as 30 km from the city center) and accept a smaller house (as small as 32 m2) than the one they left behind. With the public housing agencies (INFONAVIT and FOVISSSTE) dishing out subsidized mortgages at record low prices, it seemed like there was never a better time to buy.

Unfortunately, the 2009 recession took a heavy toll on the housing sector as demand - even for social housing - slumped in line with the rest of the economy. By this time attitudes toward the new builds had also changed drastically as their initial appeal faded in the face of long commute times as well as a lack of services and infrastructure. Many residents were forced to quit their jobs and resorted to setting up small informal mom-and-pop stores that gradually proliferated in supposedly residential-only areas, to the extent that it is not uncommon now to see more than one of these on every street. Others decided to return to the inner cities, leaving around 120,000 abandoned new builds in their wake. Despite being less than a decade old, many of these neighborhoods now look decidedly run down, with graffiti on the walls and the preciously few green areas just lumps of grass and dirt. In some, crime has also reared its ugly head.

The death knell of the social housing model came with the change of administration. The president, Enrique Peña Nieto, has proposed that housing be focused on "verticality" (high-rises), located near the city centers where residents can be close to jobs and services. It had become clear that many of Mexico's large homebuilding firms had overextended themselves during the boom years and now faced not only weaker demand but also the possibility that many of their undeveloped property holdings would be unsuitable due to new housing regulations. Over the first half of 2013, stock prices of all seven of the major firms have nosedived, notably those of Homex, Orbi and Geo which fell by around 70% in the first few months of 2013. The situation got so bad that these three firms were also forced to suspend debt payments to their lenders earlier in the year. Concerns over potential bankruptcies abound but the government has made it categorically clear that there will be no bailouts. At the very least many of these firms will be forced to undergo deep restructuring and slim down their operations as they adjust to the new model.

In the meantime, however, there is no easy fix for the housing crisis, and its resulting drag on growth. From a broader perspective, the construction sector as a whole has been smarting from the typical uncertainty during each change of administration and only once the government's infrastructure priorities are laid out will it begin to pick up. If the fiscal reform achieves its goals, Mexico could see as much as 6% of GDP spent on public and private infrastructure by the end of the term. But Mexico's recent track record on infrastructure is patchy, and many large projects such as new airports for Mexico City and the Mayan Riviera, as well as a container port at Punta Colonet have been left in limbo or cancelled altogether.

Given the strong cyclical nature of housing and construction in general, it is perhaps wise that Mexico does not lean too heavily on a sector that has the potential for creating severe economic disruption, as has been the case in the US, Ireland and Spain. Although Mexico's current housing crisis is bad enough, it is doubtful that it carries the same systemic risks as those elsewhere given the much weaker linkages between homebuilders and the financial sector, as well as the more limited scale of the slump. That some of the big homebuilding firms may not escape the crisis unscathed is probably the best warning that qualitative issues need to be factored into urban policy, which has sadly been the forgotten dimension in modern socio-economic development in Mexico. Until then, the thousands of abandoned homes will stand as a stark reminder of how the PAN's most flaunted legacy could possibly have been one of its biggest failures.