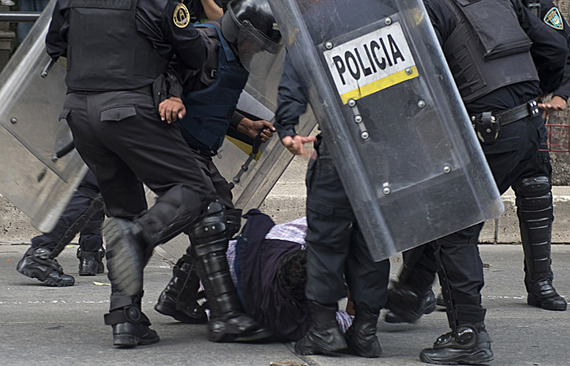 Image Source: Getty Images Mexico is facing significant domestic as well as international pressure over its record on human rights in recent years. The issue has come to the forefront following an investigation by the UN Special Rapporteur on Torture, Juan E. Méndez, which concluded that torture was generalized among police and judicial agencies who show "tolerance, indifference or complicity". The investigation further revealed that torture was widespread from the moment of arrest onwards, used to extract confessions, and also used to punish detainees.

The use of the word "generalized" was the main point of discord with Mexico's foreign affairs secretariat (SRE), which admitted that although torture indeed took place in Mexico, it was not representative of conditions across the whole country or of the legal framework established to prevent it. Moreover, use of the term implied some degree of state sanctioning of human rights violations, which could have international legal repercussions. The SRE also questioned the 14 case studies used in the report, which represented a total of 107 individuals who claimed to have been victims of torture and other abuses. Of course, the SRE's backlash did not stop there. Aside from the SRE publically calling the report "irresponsible, unprofessional and unethical", it left it unclear whether it would work with Mr. Méndez again and made note of other previous incidences in which his work had been questioned by the host government (in this case, a report condemning Australia's offshore immigrant detention centers that was also strongly objected by the government of Tony Abbott).

Mexico's uncertain role in the world

The response by the SRE is regrettable, particularly in light of the fact that torture and other human rights abuses are well documented, and have skyrocketed since the government of Felipe Calderón (2006-12) launched its war against the cartels in December of 2006. However, it is neither surprising nor new. A turbulent 19th century in which the country endured various foreign interventions has resulted in exaggeratedly defensive views (that border on the indignant) towards negative foreign opinions. Throughout much of the 20th century, this foreign policy defensiveness was cemented through the Estrada Doctrine, a non-interventionist principle in which the government refrained from judging other governments under the expectation that it would not be judged itself. The benefit was that Mexico enjoyed a uniquely amicable relationship across both sides of the Iron Curtain: notably, it was the only country in Latin America never to break ties with Cuba after its turn to communism. The drawback was that the Estrada Doctrine shielded the country's lack of democracy from foreign scrutiny, particularly at the height of the old PRI's authoritarianism in the 1960s and '70s.

Old habits die hard, and most Mexicans did not take it well when the Fox administration (under then-foreign minister Jorge G. Castañeda) wrote off the Estrada Doctrine as obsolete and called for a new era of more active participation in world affairs. But aside from a few stints in the UN Security Council, Mexico's role in global affairs has remained decidedly low profile. Mexico still refuses to participate in peacekeeping missions let alone military operations abroad, rarely engages in major diplomatic issues that it is not involved in, and doesn't demonstrate anything near the global or regional leadership ambitions the way that other emerging economies like Brazil have attempted. Mexico has instead tried to pull its weight by having a more active role in promoting international cooperation on issues de jour such as human rights, climate change and economic development. This has included hosting a number of major conferences such as the 2002 UN International Conference on Financing for Development (in Monterrey) and most recently the 2010 UN Climate Change Conference, also known as COP16 (in Cancun). On the economic front, Mexico has shown quite an appetite for expanding its network of free trade agreements, building on the momentum from the signing of NAFTA in 1993.

Getting away with it

Unfortunately, despite the many treaties and conventions on human rights that Mexico has signed over the years, there are still chronic failures across all levels of government in upholding them. Successive administrations have instead downplayed the scale of human rights abuses that have taken place in the country, be it feminicide (Ciudad Juárez in the 1990s, the State of Mexico today), abuses by security forces (the 2014 Tlatlaya shootings and the more recent 2015 Apatzingán shootings that are currently under investigation), and of course torture. Furthermore, they have taken the position that insofar as the government cannot be accused of systematically sanctioning these abuses the way some authoritarian regimes would, then it cannot be blamed for errors of omission particularly in situations where state or municipal agencies are involved due to Mexico's federalist system of government. So yes, torture exists in Mexico but it is not "generalized" because the government doesn't order the police to torture detainees, it simply doesn't have the capacity to prevent it. Or so the argument goes. Of course to any detainee who has suffered a tehuacanazo (a uniquely Mexican torture method in which a bottle of mineral soda is shaken and forced up the nose of a victim, often with chili powder) in order to confess to some hypothetical crime, this is only an issue of semantics.

It would be unfair to pin the blame on the Peña Nieto government, given that torture in Mexico has been a decades-old scourge. However, it is his government that will face the biggest challenge to its international credibility on human rights due to the fallout from the Ayotzinapa kidnappings (which were explicitly mentioned in the UN report). Quite simply put, Mexico's age-old tactic of proving its good intentions by invoking the treaties or laws it has signed is growing old, and the excuse of not having the resources to deal with its human rights problems is increasingly hard to accept considering it is an upper middle-income country in the G20. As a result, even Mexico's more influential economic partners like the US and UK are finding it increasingly uncomfortable to ignore the subject of human rights abuses during state visits, and to uphold Mexico's apparently special status when it comes to accountability on the matter. With the honeymoon period with the global media now clearly over, the burden of proof from now on will rest on Mr Peña Nieto and the SRE to show that its intentions translate into outcomes.

This would, however, be nothing short of a complete makeover in how Mexico tolerates foreign scrutiny, and for the government to show humility in accepting both its errors of commission and omission, the latter which it has historically never felt the need to atone for. A far cry but one that if not taken seriously today could have more serious consequences to Mexico's credibility abroad tomorrow.