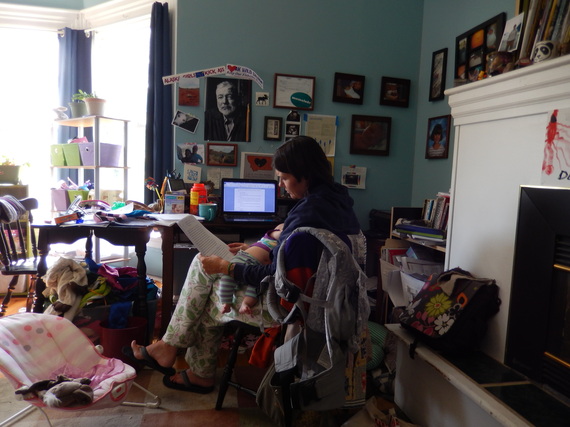 I see my self-identity in the same way I see most things: a list, in greatest to least importance. I've found I can't use the multitude of hats analogy or some kind of flow chart where circles are connected by lines and entwined in Venn diagrams. I need a list. I need a top shelf.

At the age of 33, when my older daughter was almost five, I put "Writer" at the top. But not just any writer, a real writer. A writer who scoffs at blogging and gets published in literary magazines and is working on their novel. A writer who reads books by other writers who require long discussions and critical thinking. I wanted to be a writer's writer, with an MFA in my bio. And maybe I still do. Eventually.

I've been a single mother for eight years. My second daughter's birth stopped time. My world lost its momentum in revolving towards goals and dreams. "Mother" edged its way to the top of the list, then took the spot with a thunk.

This word, this title, this role, this label. I would never tell someone "I'm a mom" when they ask me what I do. "I'm a writer," I say. Because that identifies me, the part of me who stays when I am away from my kids. That is who I fight to maintain.

But what does being a writer mean? For years it meant drinking wine, smoking cigarettes, and staying up until three in the morning reading poetry with other writer friends. It meant scribbling in journals every night since I was 10 years old. It meant aching over edits, submitting final drafts of 30-page essays, and dissecting John D'Agata. It meant immersing myself in a culture that isn't all that kid-friendly. I mean, my classmates didn't go out for drinks and talk about how it felt to see their kid walk into a brick building with a new backpack on their first day of kindergarten.

What does being a mom look like for me? The baby sleeps with me. Since graduating college a year ago and beginning a freelancing career where I work from home, I immersed in motherhood. I don't get a break from it, I don't get a moment away from it, it is almost all I think about.

I think having an infant causes a bit of an identity crisis. Who am I as a writer? Or even as a person? But, at the end of the day, what matters to me after not leaving the house for 36 hours and not showering in twice that, is a need for my community. And that community is not at the bar talking about Raymond Carver over double whiskeys under clouds of cigarette smoke (though sometimes I wish it could be). That community is online, looking up blocked milk ducts, and pumping milk out of engorged breasts like I am, feeling more alone than they've felt in a long time.

I worked as a housecleaner through college, but I never considered going through the motions of doing it full-time. "This is just what I'm doing to get myself through school," I'd say to people who asked what my business name was. To an extent, I thought of losing myself in motherhood the same way. "This is just what I'm doing while they're young," I'd say, to keep "Mom" from getting to the top of the list.

But being a Mom has made me a better writer. Not necessarily because of the subject matter. I don't look to my kids for things to write about. I write about my kids because they teach me more about myself than I ever could have learned from books or lyric essays. It's the loneliness. It's the need to share your day with someone, staying up late to write it down, and posting it online where other moms will read it and know exactly how it felt in that aisle of the grocery store in front of the ice cream you'd just said "no" to. It's being a part of that community of moms who write about their own journey, too. It blows my mind and humbles me almost every day. Because some days you're just happy that everyone's bellies are full, and that you remembered to put your boob away when the UPS guy came to the door. But I'll let the humor writers blog about those.

More:
ParentsSingle MothersCreative Writing
Newsletter Sign Up
Raise the kind of person you'd like to know
Subscribe to our parenting newsletter.
Successfully Subscribed!
Realness delivered to your inbox