On March 8, 2014, 239 people boarded a flight in the Malaysian capital Kuala Lumpur, destined for Beijing. About an hour and a half after takeoff, flight MH370 vanished from radar screens.

Twelve months later, the search for the plane is still ongoing. Families of the passengers and crew have few answers about what happened to their loved ones. Conspiracy theories abound.

This Sunday marks one year since the plane disappeared. Ahead of the anniversary, here's a look at what we know and what remains a mystery about the missing flight.

Flight MH370 took off from Kuala Lumpur at 00:41 local time. Investigators have enough data to plot the flight's path for less than two hours, after which the plane's final resting place is a matter of analysis and interpretation.

At 01:19, the pilot or co-pilot made the last contact with Malaysian air traffic control. The plane then crossed into Vietnamese airspace but never checked in with Vietnamese air traffic control. The plane's transponder, which transmits the aircraft's position to ground radar, shut down. Malaysian and Thai military radar detected the plane veer off route to the west, and then head north. Flight MH370 was last detected by Malaysia military radar at 02:22, flying over the Andaman Sea. 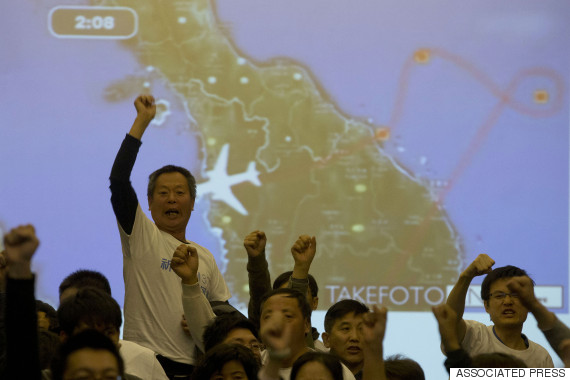 Flight MH 370 continued to fly for almost six more hours, according to seven automatic "pings" picked up by satellites. Official investigators used this data to plot two possible paths for the plane: one stretching north toward Kazakhstan, and the other south into the Indian Ocean. By combining satellite data and information from the plane, they concluded that it had flown the southern route, eventually running out of fuel and plunging into the southern Indian Ocean. 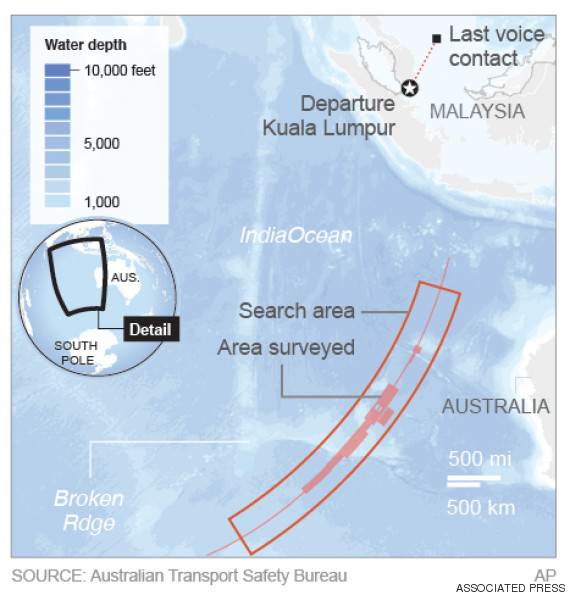 The search for the missing plane has been unprecedented in size and scope. The initial search effort was assisted by 26 countries. The search area was revised several times in the following months, in line with the analysis of satellite images and other technical data.

In June, the Australian government identified the current priority search area -- a 23,000-square-mile area of the Indian Ocean off the west coast of Australia. An Australian-led international search mission has scanned about 40 percent of this zone, and expects to complete the search by May 2015. Australia and Malaysia pledged to split the nearly $50 million cost of the underwater search. 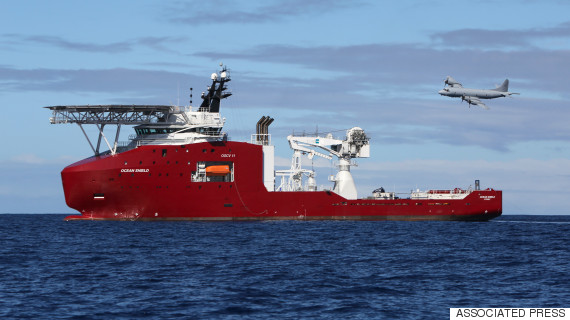 Despite all the efforts, no plane, wreckage or black box has been found. In the wake of the plane's disappearance, amateur sleuths scoured publicly available satellite images and logged 2-3 million possible sightings of the missing flight. Not one of them turned up a thing.

But as the Australian official leading the search points out, its not over until it's over. The chance of finding the plane does not diminish as the search goes on; rather, it is equally likely to be in the last corner they look, Martin Dolan, chief commissioner of the Australian Transport Safety Bureau, told The Associated Press. "If the aircraft is out there, we will find it," he said.

What We Don't Know

The reason behind the plane's disappearance remains utterly elusive. Malaysia declared the flight's disappearance an "accident" in January, paving the way for compensation payments for passengers' families. But the investigation has not formally ruled out foul play. "The story is in stasis, and that's where it's likely to stay, probably forever," David Learmount, operations and safety editor for the aviation website Flightglobal, told The Telegraph. "Getting used to that idea is the difficult bit."

The absence of information is extraordinarily painful for the relatives of those on board. “We can accept any conclusion -- no matter if it was a crash or even if it was maybe exploded by someone," Jack Song, whose sister was on the plane, told The Telegraph. "But there is no information -- nothing. We don’t know anything. That is tough and unacceptable for us.” Some of the families are highly skeptical of the official account of events. Groups of relatives regularly protest outside the Malaysian embassy in Beijing to demand answers. 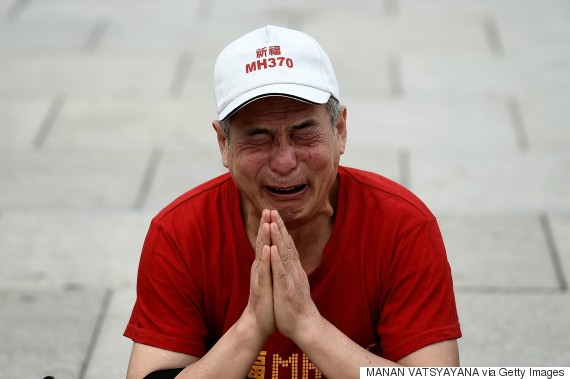 A relative of Chinese passengers on missing Malaysia Airlines flight MH370 cries at a protest outside the Malaysian prime minister's office in Putrajaya on Feb. 18. (MANAN VATSYAYANA/AFP/Getty Images)

Conspiracy theories have flourished in the information void. "It's amazing how much information we don't have after looking at this case for all this time," aviation expert Jeff Wise told Reuters this week. Wise believes the plane flew north to Kazakhstan, and was hijacked under order of Russian President Vladimir Putin. His is hardly the most outlandish suggestion. Others believe the plane was secretly diverted by the CIA to a U.S. military base in the Indian Ocean, accidentally or defensively shot down by U.S. forces in the area, hijacked by terrorists, or captured by aliens.

Malaysia said it would release an interim statement on the progress of the investigation around the time of the anniversary, but CNN reports that it is not expected to reveal much new information.

Many people were baffled that an aircraft as large as a Boeing 777 could just disappear. The disappearance of flight MH370 has focused attention on the limits of the aviation system, and the industry is now trying to close some of the gaps.

The U.N.'s International Civil Aviation Organization proposed new regulations last month that would require airlines to get updates from their aircraft via radar or satellite every 15 minutes, rather than every 30-40 minutes as they presently do. Shorter communications intervals would have alerted authorities to MH370's disappearance sooner; however, as The Associated Press notes, a plane can travel more than 150 miles in 15 minutes. The rules would also require new planes with more than 18 seats to be built with systems that automatically transmit their location every minute if, like MH370, they deviate from their flight path. The plan will go to a vote in November. 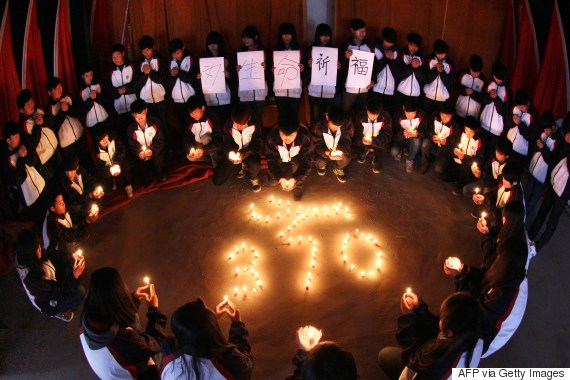 High school students hold candles during a vigil for passengers of the missing flight MH370 in Lianyungang, China, on March 25, 2014. (AFP/AFP/Getty Images)

The aviation industry is also examining moves to make flight data recorders, or black boxes, easier to find. Aircraft manufacturer Airbus plans to fit some of its planes with ejectable black boxes that can float. Europe's aviation safety watchdog has called for the minimum battery life of black boxes to be extended from 30 days to 90 days. MH370's black boxes will be long dead, if they're ever found.

There have also been positive discoveries. While search ships hunt for MH370, their sonar readings have mapped an area of the sea floor the size of Nebraska. Stuart Minchin, a divisional chief at Geoscience Australia, told The Associated Press that the maps will help scientists to predict ocean currents, as well as improving tsunami warnings and weather forecasts.