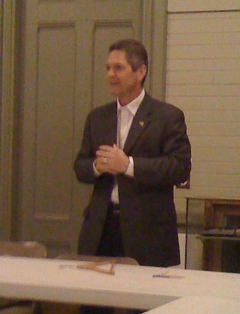 Last night, MI-07 Representative Mark Schauer spoke to the 2010 annual membership meeting of the Western Washtenaw Dems. During his conversation, he came out firmly in favor of a reconciliation path to passing health insurance reform legislation and was outspoken about the atrocious decision by the Supreme Court of the US (SCOTUS) to allow nearly unlimited corporate funding of political campaigns.

We need to push a bill, maybe taking the Senate bill and modifying it, and put into it all the components that can be passed under reconciliation. The long and short of that is that it doesn't take 60 votes. It takes 51. That's actually what our democracy is about. Anybody that complains about that, I'm going to give it to 'em and say it's not 60 votes that's a majority, 51 votes is a majority. 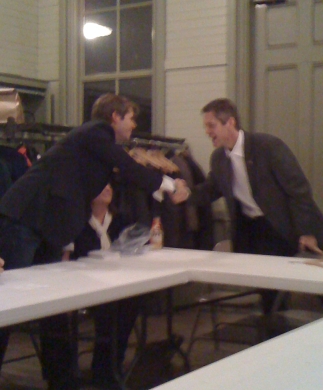 Mark Schauer, our freshman representative, is doing our district proud. He's been a strong proponent for health insurance reform and, as I have talked about before, he's doing it right.

Here's the full quote on health insurance reform and the use of reconciliation:

My recommendation is what I think is a practical solution, a solution I believe that can actually work. We need to push a bill, maybe taking the Senate bill and modifying it, and put into it all the components that can be passed under reconciliation. The long and short of that is that it doesn't take 60 votes. It takes 51. That's actually what our democracy is about. Anybody that complains about that, I'm going to give it to 'em and say it's not 60 votes that's a majority, 51 votes is a majority. So here's what I think we're going to do. We're going to pass all of the elements that are allowable under those rules. And they have to be related to the budget. Those would be related to the health insurance exchange, affordability of health care coverage, Medicare, the donut hole, etc. And then we follow on with the insurance reforms.

When someone mentioned that the Republicans would be able to challenge each element, my response was "That's a GOOD thing. It forces them to have to take a stand on this stuff. Do that. Absolutely, make them do that."

We have to put these guys on the defensive. We put them on record. Hey, I've heard their rhetoric. They say, "Oh, of course we want to end discrimination based on preexisting conditions," all of that. We run all of those in a separate bill or a number of bills. I think that's the strategy. I've heard them say, "Break it up, do this incrementally, do this in pieces." Well here are your increments. Here are your pieces. This is what you said. I'll play back to them their recording of everything they said they want. I think that's the way we're going to get it done.

What I think the people in Massachusetts said, they didn't vote against health care reform. 97% of the people in Massachusetts have health care, Scott Brown voted for health care. What they said is, "Don't make me pay for a sweetheart deal that Ben Nelson got for Nebraska. That's why that bill is the problem. And also, the president, I wish he hadn't changed his mind from the campaign on the excise tax on benefits. That's a big problem. So I think the Senate did it to themselves unfortunately and I just think that bill is a non-starter and we're going to have to fix in a couple of different ways.

Rep. Schauer was also outspoken about the SCOTUS decision this week:

I think what the Supreme Court did yesterday is a game changer. I told a newspaper today that this decision may make candidates incidental. It may make grassroots activists and small donors incidental. I thought about that and then thought "the hell with that!" We're not going to let ExxonMobil or AIG or Aetna or anybody else buy an election, at least not HERE! Because if we didn't like what they did to our nation's economy, we're sure not going to like what they'll do to our nation's government. The Supreme Court yesterday, what they were doing is selling our democracy to the highest bidder.

I asked him, "Are you supporting Alan Grayson's package of bills?"

Rep. Schauer also had something to say about Democratic messaging and how it needs to be changed and more effective:

I think the president is figuring out how to talk about things. We have to remind people just how bad things were one year ago. We have got to remind them of who is responsible for that, right? It wasn't Barack Obama. It wasn't me. The other side is pretty damned good at causing an accident then fleeing as fast as possible and claiming the people in the backseat are responsible.

On his Republican opponents:

There are three people running against me. I don't talk about the guy from Manchester (you tell me if you think I should). I talk about Tim Walberg and this [Brian] Rooney guy. Walberg, what are you going to say? I mean the guy was a charter member of the Party of No, did nothing, actually embraced - the people who ruined our economy, were the ones that got him elected the first time and tried to get him reelected against me. Rooney is another extremist who worked for Tom Monaghan and the Thomas Moore Law Center and last voted in Florida. And he thinks he can come in and buy himself a seat. He was actually shopping for a Congressional seat in Florida and I guess he decided to come here because it would be "easier".

As he was talking, an Amtrak train roared by the Chelsea Depot where the meeting was held, interrupting him. He shouted over the train "We're going to get high-speed rail for ya!" then continued:

I wish I could make that as a promise. I feel very good about it. I just met with Secretary [Ray] LaHood at the Auto Show, he's the Secretary of Transportation, and he said "the president and the vice-president know about your interest in high-speed rail funding" and he said they'll be making an announcement later this month. So I'm feeling very good about that.

Rep. Schauer is in a tough district for Democrats, maybe one of the hardest in southern Michigan. But he's hitting his stride and, along with Gary Peters from MI-09, he's doing a fantastic job of representing his constituents. He's out in his district, listening to voters, listening to business owners, and doing an excellent job of promoting our state, something we desperately need given our 20% unemployment rate. I, for one, am glad to see him pushing for the reconciliation path for heath insurance reform. I'm also thrilled that he's supporting Alan Grayson's "Save Our Democracy" Reform Package (H.R. 4431-4435).

Oh, and as a parting shot, another Michigan Democrat, House Judiciary Chairman John J. Conyers, came out in support of Grayson's legislation yesterday he announced he is co-sponsoring the Ending Corporate Collusion Act (H.R. 4433).