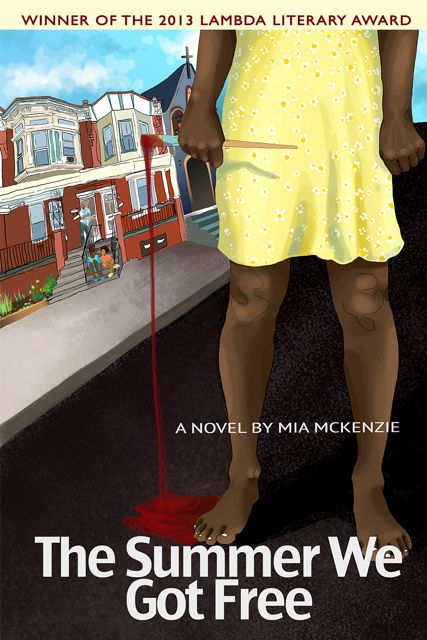 I read a lot of books. a lot. And I get frustrated. Frustrated because in much of the fiction I see the same narratives recycled about black life. Angry because I know there is more to who we are as black people -- more complexity, more nuance, and many stories that have yet to be told.

One book that helped to alleviate my frustration this past year was Mia McKenzie's Lambda Literary Award Winning The Summer We Got Free.

Within this book's pages, I found a range of black characters with complicated intra-psychic lives, sexualities and (Thank God) relationships to the Christian church.

The novel revolves around the Delaneys, a family isolated within their community after a tragic event sends each of them in different psychological directions. McKenzie does not offer insight into the entirety of the trauma in the beginning though. Instead the novel carefully leads you down a maze of emotions, forcing you to find your own footing as the ground underneath you continues to change shape and form. The twists and turns will shake you to your core. And like me, will likely lead you to question sexuality, gender, psychology, and spirituality as you know it.

Finding such a work, I had to reach out to its writer Mia McKenzie, who is also well known for her incisive and unapologetic blog, Black Girl Dangerous.I reached out to Mia to talk to her about The Summer We Got Free, being a black woman writer, and what she thinks The Summer We Got Free offers the black community as a work of art.

Yolo Akili: How do you believe your identity as a black woman influenced your creation of this book?

I think Ava's husband, Paul, is one example. Paul, who is the husband of a character we love and want to see with another woman, would be a really easy automatic villain or antagonist. I think the straight husband in a really queer book is set up to be disliked in a way. But I see, and tried to portray, Paul as a complicated guy with a lot of complicated experiences of violence and betrayal. He is a black man, formerly incarcerated, and because of my intersections I have the ability to consider what that means in the world. So, I couldn't let him be the easy villain. And I don't consider him a villain at all. I don't think that's an easy thing for people to consider, especially when they are rooting for the very relationship that Paul is in the way of.

Akili: When reading The Summer We Got Free, one of the many characters that moved me was Ava, who is unapologetic in her criticism of the Christian church as a very young child. At one point she tells her pastor: "I don't think people should be devoted to the church... Because people can't fly if you always telling them they shouldn't." Ava reminded me of my own criticism of Christianity, as well as the questions that many young black children have about religion that are stamped out or silenced. What was the inspiration for this aspect of Ava's character?

McKenzie: I grew up going to church. Well, being forced to go. My mother's side of the family is pretty religious and my sisters and I went to church on Sundays, sang in the children's choir and went to the church's day and sleep away camps in the summer. But it was a social thing for me. I don't think I ever actually bought what was being sold.

It wasn't even necessarily that I questioned it. I just didn't really care. I was the kind of kid who just did what she wanted and hoped to not get caught by my parents or grandparents. I wasn't ever worried about Jesus. As I got a little older, around 11 or so, I started to pay more attention to what they were actually saying in church, and that's when I started to intellectually push back against it, to ask questions, to disbelieve. Around that time I started flat-out refusing to go to church anymore. My mother couldn't force me, and she didn't want to have to argue, because she'd worked all week and she was tired, so that was that. So, Ava's experience of the church is a very exaggerated version of my own story. Her's is much more dramatic.

Akili: One of the many parts in the novel which made me shiver, was the psychic healing that happens between Geo and Ava at the end of the book, where he appears to her and a sort of closure is reached. Why have them communicate this way? Especially in a novel that seems to have strong critiques of spirituality?

McKenzie: While the novel questions and at times criticizes organized religion, I think in many ways it embraces spirituality. The spirit world is very alive in the story and several things happen on a supernatural plane, including ghostly appearances. Magical happenings occur in each character's story, some more subtly than others. As a writer and a reader, I am really interested in the sprinkling of the fantastic through a story, in the ways it can exist alongside the mundane. Creating that juxtaposition is one of the reasons I write stories.

Akili: What do you think that The Summer We Got Free offers the black community, in terms of an image of ourselves? What do you think is it's contribution emotionally, spiritually psychologically? How do you see it potentially healing, changing us? And how has writing it changed you?

McKenzie: I think it offers us a new way of considering freedom. It shows us the ways in which we already have within us everything we need and that the work of freedom is to stop investing ourselves in structures that only hold us back from being our fullest selves -- including homophobia, rigidly-defined gender-roles and gender expression, colorism/shadism, invisibilization of mental illness in our communities, and religious practice that does not embrace the questioning of everything.

I think it offers a level of dimensionality of our experiences that isn't often seen. One theme of the book is the idea of looking deeper, of taking the time to really see each other and try to really understand each other's lives and struggles, rather than glancing, rather than skimming. It asks for more intentionality, more gentleness, more love. And less fear. People do seem to be getting real emotional and spiritual healing from this story. People cry for hours after it's over, and they tell me that those tears are mostly of joy and the feeling of being a little more free. That's definitely how writing it felt for me. The way I see and access freedom now has been greatly influenced by the characters who came through me to tell this story.

Akili: I believe that "all art is self portrait." Where is Mia McKenzie in The Summer We Got Free? How have you painted yourself into the story and where can we find you?

Ava is definitely a lot of me. A gifted kid, tomboyish, defiant. She isn't afraid to say what she feels and what she believes, even sometimes to her own detriment. She's impulsive, sometimes foolish in her determination to be exactly who she is, and to hell with anyone who doesn't like it. That's definitely me.

You can learn more about The Summer We Got Free by clicking here.

Image art by and courtesy of by Amaryllis DeJesus Moleski