Every Memorial Day, I take out a scrapbook my grandmother made over 40 years ago. Each page is filled with headshots of young men with stiff Air Force hats clamped to their heads, their newly-buzzed hair just visible above formal collars. Some gaze at the camera confidently, their broad shoulders filling the frame, while others appear too young for the uniforms buttoned around their necks. Under every face is the exhortation: WHERE IS HE? My uncle's face is on page three.

According to an eyewitness report, on the night of March 28, 1972, Edwin "Jack" Pearce and his 14-man crew boarded the AC-130 gunship "Prometheus" in the darkness of Ubon Royal Thai Air Force Base bound for an armed reconnaissance mission over Laos. The slow-moving gunship was accompanied by 4-FE flying escorts, and it's from the vantage point of one of their pilots that the last known whereabouts of my uncle are recorded: It's 3 a.m. in Savannakhet, and Jack is in the narrow gunner's seat, his weapon trained on the jungle below. The pilot reports "three closely spaced surface-to-air-missile (SAM) firings and an unidentified radio transmission 'SAM.'" The sky lights up as the second SAM collides with Prometheus and she explodes in the sky, sending the burning remains tumbling to the ground.

A fifteen-second [emergency] beeper signal was heard from the vicinity of the burning aircraft approximately ten minutes after impact. The exact location of the signals could not be determined, no parachutes were observed, and repeated passes over the crash site revealed no indication of survivors.

The next morning, in the small town of Milford, Pennsylvania, an Air Force representative knocked on Eddie and Rosemary Pearce's door to tell them that their son -- whom they thought had been serving his second tour of duty in Thailand, out of harm's way -- had been shot from a plane flying over neutral Laos and was considered missing in action (MIA).

My grandparents refused to believe that their firstborn had died in the crash. After all, a 19-year-old Eddie Pearce had boarded a B-17 bound for Germany in World War II and, after parachuting out of a burning plane, survived two years in Stalag 17 prison camp. If he could make it home, so could his son.

An eyewitness account of Jack's crash from a different perspective gave my grandparents renewed hope. A Laotian man who had been aboard one of the 30 trucks carrying supplies across the Ho Chi Minh trail that night told an Air Force representative that the AC-130 made five passes over his group, setting several trucks in his convoy on fire. On its fifth pass, the gunship was hit by 37 MM anti-aircraft fire and erupted in flames.

[The AC-130] turned southward and crashed approximately 10 km south... nine crewmembers of the downed aircraft had been rescued by Laotian civilians living near the crash site.

My grandfather retired early from the Pennsylvania State Police force to devote himself full-time to the search for his son. He became State MIA Chairman for Veteran's Affairs and Northeast Coordinator for the National League of Families, a group composed of the family and loved ones of missing men. It was at a League meeting in Washington in December 1972 that my grandfather stood up in a crowded conference room and asked President Nixon if the peace agreement ending the Vietnam War would include Laos. He replied, "All of Southeast Asia."

There is a photograph of my grandmother standing alone at a podium. She is in tears as she speaks about her son at a "Freedom Tree" dedication ceremony in Milford, PA, on October 13, 1973 -- while her husband is halfway around the world in Vientiane. The next day, the Royal Lao and Pathet Lao release their list of prisoners of war. It is 30 years to the day Eddie was shot down during World War II and taken prisoner. 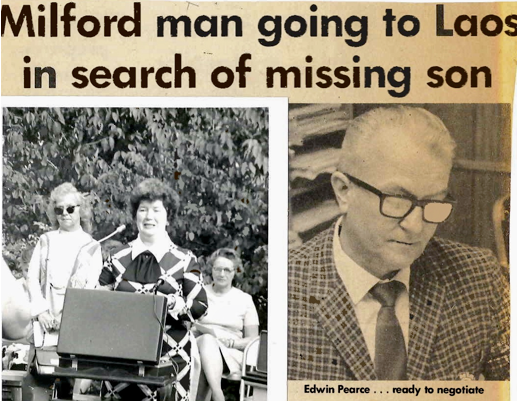 When the Paris Peace Agreements are signed in Washington on January 27, 1973, they make no mention of Laos or the U.S. soldiers missing there. My former POW MIA grandfather and his wife begin to spend their weekends protesting in D.C. and their weekdays at the kitchen table, making calls and writing letters to anyone who would listen. In these letters, perfectly preserved by my grandmother, her small cursive hand corrects, crosses through and joins my grandfather's as they write to newspapers, government and embassy officials and even presidents searching for answers about their son:

Although I spent over 600 days as a POW of the Nazis in WWII and one of my sons is still unaccounted for in S/E Asia after 12 years, I believe this system of government is the best ever created by man...[but] deceitful is the nation that, having heroes, betrays them.

On July 26, 1979, Rosemary and Eddie received word that their son's status, in the absence of further information, had been moved from MIA to KIA, that his "death is presumed to have occurred for the purpose of termination of pay and allowances..." The letter offered a lump sum to Rosemary Pearce for $20,000.

Without a body to bury, my grandparents refuse to accept it.

The volatile political situation in Laos prevents excavation of the crash site until 1984. A joint Laotian and Air Force team identify a single tooth they find amongst the debris as Jack's and claim it as evidence of his death. My grandparents reject this, too.

Stories that some of the men survived the crash continue to swirl; the inscribed wedding band of crew member Curtis Miller is recovered by a reporter and returned to his family and the dog tags of another crewman, Robert Simmons, are anonymously mailed to the U.S. embassy in Laos. Tests reveal no fire residue on the tags, further fueling the belief that not all of the men died in the crash.

Throughout the '80s, private citizens like Jack Bailey and ex-Green beret James G. "Bo" Gritz make international headlines with promises to go where the government won't to "bring our men home." My grandmother cuts and saves every article.

One morning, my grandfather falls while getting up from the breakfast table. He has two more strokes in quick succession that render him unable to speak.

In October and November of 2005, another joint excavation team returns to the crash site in Laos, this time armed with DNA-based identification technology. Their report states the site had to be re-cleared during the recovery process because "the vegetation had grown about a meter high over the intervening 13 weeks." In a place where the thickness of the encroaching jungle threatens to erase all traces of the past, their tools unearth what they later identify as parts of boots, safety vests -- and human bone among the weeds. The excavation is stopped early due to "time constraints."

Back in the U.S, my 83-year-old grandfather is living in a VA hospital and running out of time. On New Year's Eve 2006, surrounded by his wife and three surviving children, he dies.

Without Eddie, my grandmother's health quickly deteriorates. She moves in with my mother, who is battling her own health issues as her breast cancer spreads to her bones and brain. My mother goes to bed every night with the prayer book her father had carried in Stalag 17 beside her. The title page is inscribed: "There are more things in this world wrought by prayer than this old world has ever dreamed of."

And after 36 years of searching, doubt, and the excruciating wait for an answer, the countless prayers were answered. My mother's voice on the line is shaky when she calls me: "It's Jack. They think they've found something."

A far-off droning sound turns into a rib-shaking thrum. The 30-odd assembled guests at the funeral look up at the sky as the thick underbelly of an AC-130 passes overhead. I think of my uncle, the same age as I am now, flying over the jungles of Savannakhet. I think of the man in the truck below him that he is trying to kill, watching the night sky suddenly fill with light and the sound of gunfire. I think of my grandfather at age 19, parachuting into an unknown future.

Three volleys of shots pierce the sky over Pennsylvania, commemorating the dead.

My mother wrote the inscription on the gravestone my uncle and grandfather now share:

Separated by a generation fought in different wars, both shot down from the skies. The father, a prisoner of war, returned to fall in love, raise five children and live a long life.

The son's remains were returned thirty-six years after he was shot down, to be laid to rest with his father, who had never stopped searching for him. 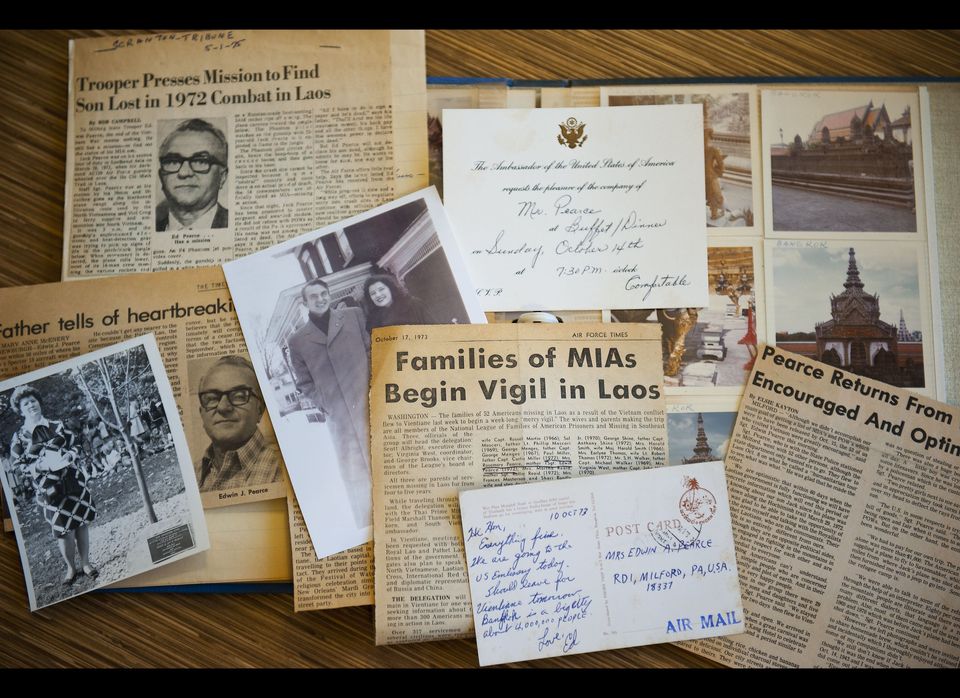 1 / 22
'We Still Don't Know If Jack's Alive Or Dead'
My grandmother kept meticulous scrapbooks of clippings, photos and letters chronicling her and her husband's search for their eldest son, Jack. L-R: "Trooper Presses Mission To Find Son Lost in 1972 Combat in Laos," <em>Scranton Tribune</em>, May 1, 1975; "Father Tells of Heartbreaking Search for MIAs,"<em> Times Herald Record</em>, October 26, 1973; Photograph of my Grandmother at "Freedom Tree" Dedication for Jack on October 13, 1973; Photograph of Rosemary and Ed on their honeymoon in New York, 1946; "Families of MIAs Begin Vigil in Laos," <em>Air Force Times</em>, October 17, 1973; A postcard from my Grandfather to my Grandmother from Thailand dated October 10, 1973; An invitation to the U.S. Embassy in Thailand; Photos of my Grandfather's 1973 trip to Bangkok; "Pearce Returns From Laos Encouraged And Optimistic," publication unknown, 1973.
Damon Dahlen, AOL