Forget the Queen of Versailles' Biggest House in America.

Chateau Artisan, a secluded "castle" located in the Redland area of metro Miami, is surrounded by a moat -- and it can be yours for a cool $10.9 million.

The three-story, eight-bedroom, eight-bathroom, 19,222-square-foot chateau is surrounded by a private five-acre lake amid an additional 14 acres of land.

Renowned Miami architect Charles Sieger built the house, which is modeled after a 17th century French chateau, in 2007.

According to Miami New Times, Sieger and his wife bought the acreage in 2002 for $414,000 and have put the property on the market after living in their custom house for only five years.

A pair of concrete gazebos, accessed by stepping-stone paths, anchor both sides of the house. Out back in the sculpture garden, there's an enormous koi pond, vast manicured lawns, and a modern Stonehenge-like monument for that added Legends of Zelda feel.

Lest you forget this castle is located in South Florida and not, say, Canterbury, England, it also comes with a huge pool, a BBQ gazebo, a boathouse, a covered patio, and a full-house generator for hurricanes and other emergencies.

For a baller's look at Chateau Artisan, watch the video for rapper Birdman's 2010 single "Fire Flame", which was filmed on the Siegers' property. Or check it out in the photos below:

Miami Castle With A Moat On The Market For $10.9 Million (PHOTOS)
For Sale: Charles Sieger’s Chateau Artisan 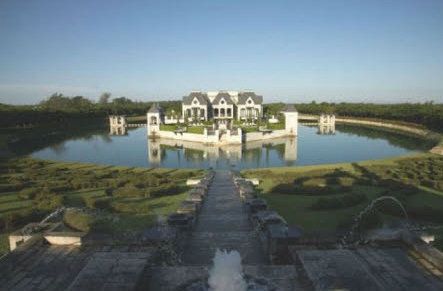