There are skeptics out there that think our struggles this season are a weird karmic repercussion after having four consecutive Finals appearances. That our injuries and adversities are in some ways what we oddly deserved. That is the biggest crock!

Considering everything that's happened to the Heat, we are still in the middle of a playoff battle -- so put down the voodoo doll, call off the Santeros and chill out!

Granted this has been one of the most frustrating seasons for Miami Heat fans, but the season is not over. So what we lost #6; so what that we received basically nothing out of Josh McRoberts; so what we had major injuries and continuity problems with Wade and Bosh before eventually losing Bosh for the year (get well fast, Big Fella!).

You have to look on the Whiteside, um, I mean bright side. We still have D-Wade, Hassan and the acquisition of the Dragon. And this new Walker guy ain't so bad!

We can't look at this year as a season of acquisition to look forward to the future (although we are looking good in that area). This season is not over. Where is our pride? Our championship spirit? Losing games to New Orleans and Atlanta by two points when they have their best players sitting is inexcusable! We need to FLEX, finish strong, and get to the playoffs. We have a legitimate chance of winning in the first round and who knows, what if we get Cleveland in the second round -- how entertaining?

Come on Heat, we're with you either way, but take us home and finish strong!

This season has been vexing and perplexing! And it's not because of #6's dubious departure, or the slew of injuries that have decimated our rotations basically annihilating any chance at establishing chemistry and continuity. The most vexing or frustrating part of this season is despite all the adversity, there have been so many games that we just gave away, especially at home. I've been in the arena and seen us lose to Philadelphia and Utah and Milwaukee (twice) and Orlando by one point. Not to mention heartbreaking road losses, like the Pelicans game last week. Just games where we gave it away like losers. Losers give away games like that and that's been the most vexing part of this season -- because we're not losers -- granted, the injuries and misfortunes are head-scratchers. Still I think all Heat fans wanted out of this year (after #6's departure) was to have a healthy Wade and Bosh play alongside Whiteside to see exactly what we were made of and apparently that was too much to ask. There were about six hours (after we signed Dragic and before Bosh was hospitalized) when the bell of hope rang in South Florida, but then in true vexing form, it all fell apart!

But it ain't over yet! 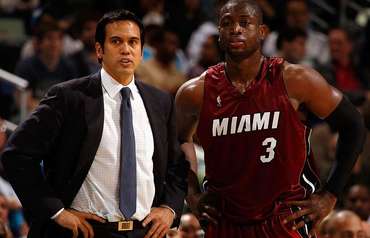