In our 305-loving cartoon brains, this is how the night before The Decision went down: LeBron James, Dwyane Wade, and Chris Bosh got together in a tree fort, made a pinkie swear around a flashlight, and woke up to Momma Wade's chocolate chip cookies and a round of cartoons.

It's not entirely dissimilar from the vision of Massachusetts artist Rachel B. Glaser, a Rhode Island School of Design grad who's been drawing NBA players since she was a 14-year-old basketball fan growing up in New Jersey. Using Photoshop, she created among other great NBA portraits the spot-on "Miami Heat Sleepover" -- something we're pretty sure is The Greatest Heat Painting Ever: 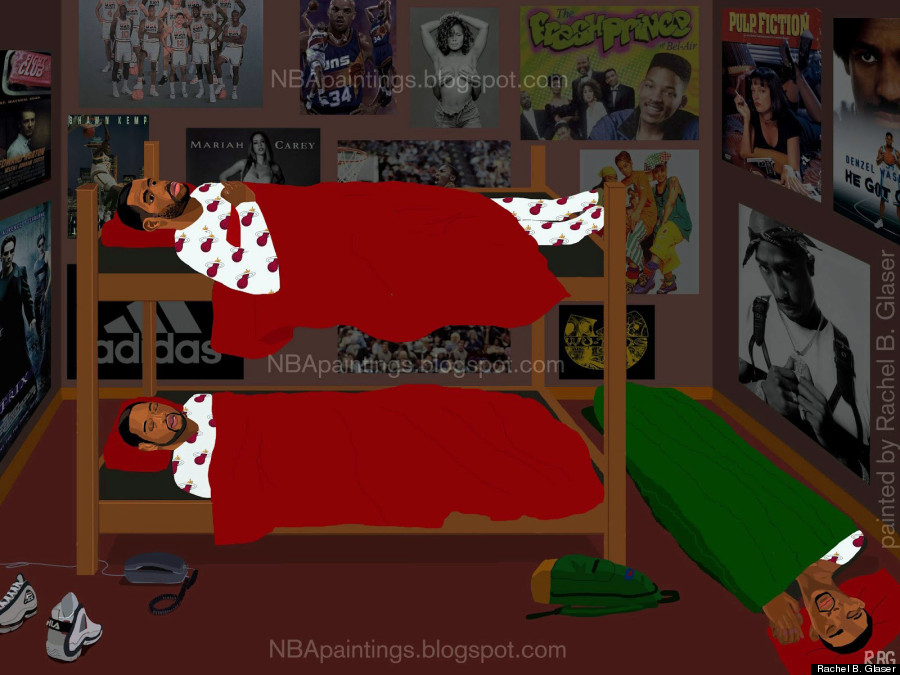 The team had just been assembled the summer before, and the media was really scrutinizing LeBron. In those early games, James seemed less life-loving and good-humored than he had in Cleveland; I assumed that he felt sort of confused or overwhelmed. Everyone was making such a big deal about him, but then mentioning Bosh as sort of a joke. Bosh was made to seem like a tag-along....

I imagined the new Heat team having a sleepover, and I placed the sleepover in the late '90s, when I was having sleepovers. I tried to pick out posters that I thought young Wade would have in his room. A lot of those posters are ones I had seen in people's rooms. There is a real social aspect to basketball, one that I am very drawn to — the idea that teammates are friends.

I meant this image to be sort of a political cartoon about the Heat. I felt like Wade had nothing to lose because the Heat were his team and he had already won a championship, so he is fast asleep at the sleepover. LeBron can't fall asleep because he's not used to wearing Heat pajamas — he's used to Cavs pajamas — and it's not his house, and he's not used to the sleeping sounds of Wade and Bosh. Bosh gets the sleeping bag because out of the three of them, he's the least celebrated, but he doesn't really mind, he's a good sport.

Indeed, and shoutout to the Tupac poster. We love all the detail, but perhaps the best part is that 18" x 24" prints of "Miami Heat Sleepover" are available for $50. Check out Glaser's store at NBAPaintings.blogspot.com, and read more about her work at Yahoo.