Members of local advocacy group 1Miami were joined by other supporters and minimum wage workers to argue against keeping wages low in a time when cost of living continues to increase. The minimum wage in Florida is $7.67 per hour, slightly higher than the federal minimum wage of $7.25, last adjusted in 2009.

If minimum wage kept up with inflation, according to 1Miami, workers would be earning $10.55 per hour.

"Their fight is our fight, their struggle is our struggle," 1Miami director Eric Brakken told the crowd gathering around the Challenger Memorial.

Before the downtown rally, participants and political candidates took a bus trip through the city to visit Miami neighborhoods and businesses who would be impacted by a minimum wage increase by Congress. With more money in workers' pockets, they were told, more money goes into the economy.

At Bayfront Park, the group shared stories of living paycheck to paycheck or being taken advantage of by their employers. Bread and roses lay on the ground to recall the Lawrence Textile Strike of 100 years ago, which helped pave the way for setting minimum wage, and establishing work hours and better workplace conditions.

Joe Garcia, a Democratic candidate for Congress, promised the crowd, "We're going to invest in America, not offshore jobs."

"That's not how our constitution was written," Rodriguez told HuffPost.

Check out seven people we met at the rally -- and find out why they turned out to protest:

PHOTO GALLERY
Why are you fighting to increase the minimum wage?
Download
Calling all HuffPost superfans!
Sign up for membership to become a founding member and help shape HuffPost's next chapter
Join HuffPost

Miami Minimum Wage Protest: 7 People We Met At The Rally (PHOTOS)
Why are you fighting to increase the minimum wage? 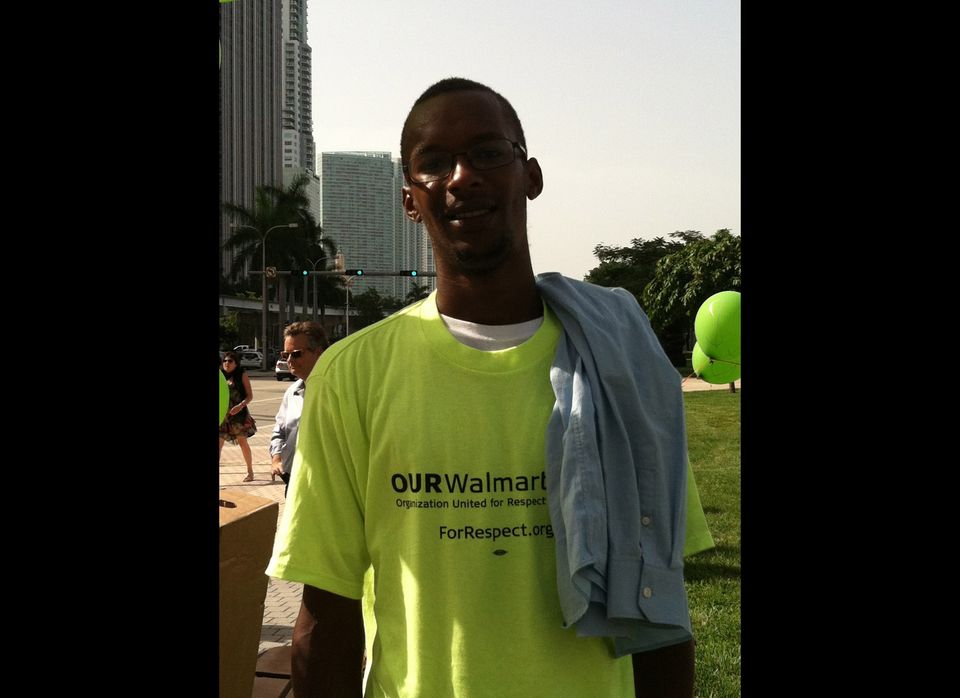 1 / 18
Marcus Edgerson
"[The minimum wage not being increased] affects me by not being able to take care of my family." A Walmart cart collector, Edgerson is a former Marine and father to a newborn child. He said that as a veteran, he is disappointed that after serving his country he is living in poverty. He makes $7.70 an hour.
HuffPost Miami