About 1,492 miles south of Boston's Copley Square, where two bombs ripped through a crowd of marathon runners and spectators Monday, hundreds of Miamians set off Tuesday night on a silent tribute run in a show of solidarity.

But first, the national anthem and a 26.2-second moment of silence -- a pause for every mile of the Boston Marathon.

“Runners have all asked, 'What can we do? What can we do?' I think this is one step in showing Boston we care, we love them, we’re supporting them,” organizer Frankie Ruiz of the Baptist Health South Florida Brickell Run Club told CBS Miami.

Estimated to be about a thousand runners strong, the Miami group also donned special tribute bibs before setting off on a 3.5-kilometer route through Brickell and up Biscayne Boulevard and back. The symbolic turning point near AmericanAirlines Arena was the starting line for the annual IMG Miami Marathon, a qualifier for the Boston.

Runner Kiley Lapointe, a Massachusetts native who lives in Miami, told the Associated Press that the bombing hit close to home: "Being from Massachusetts, a lot of friends and family were participating at the race and participating every year at the Boston Marathon. It's just a really scary, horrific tragedy."

Another who ran was former Bostonian Ken Bereski, who finished his 12th Boston Marathon moments before the deadly blasts. Rather than rest his tired legs, he was pounding the pavement for those who couldn't.

“Seeing my new city and my old city come together, I just wish it didn’t take something as horrendous as what happened yesterday to make that happen," he said.

Run club members have also designed a shirt stamped with the race time of the first blast and the hashtag #RunforBoston. Sale proceeds, according to the SFBHBRC Facebook, will be donated to the victims. 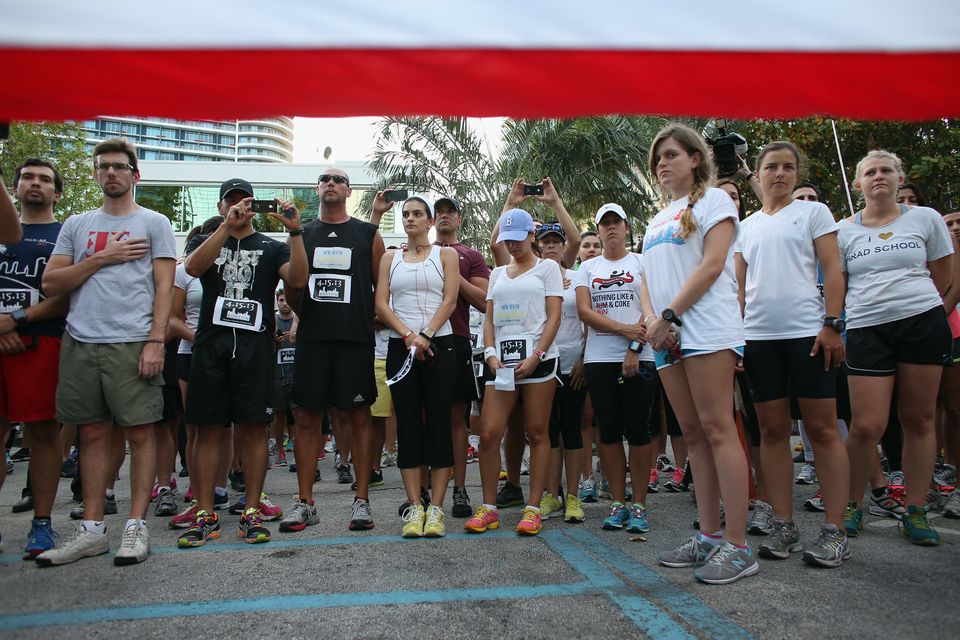 1 / 22
Miami Runners Club Organizes Tribute Run For Victims Of Boston Marathon Bombings
MIAMI, FL - APRIL 16: Runners stand together during the playing of the National Athem as the Baptist Health South Florida Brickell Run Club honors the victims of the Boston Marathon bombings on April 16, 2013 in Miami, Florida. The event drew approximately 1,000 people who wanted to honor the three people killed in the Boston bombing as well as the over one hundred who were injured. (Photo by Joe Raedle/Getty Images)
Getty Images