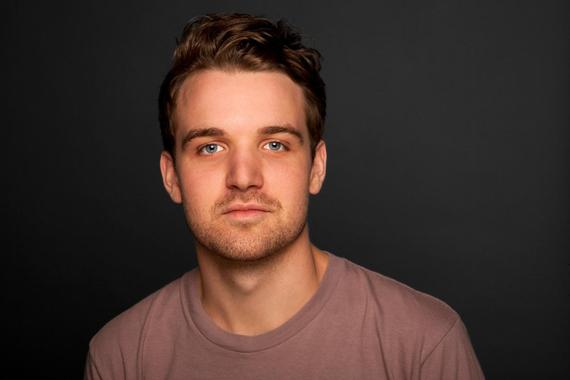 In a play where he has been surrounded by immeasurable talent - from Nathan Lane to Martin Short to F. Murray Abraham to Stockard Channing to (need I go on?) - Micah Stock stands out as the little-known but bright rising star. I met up with him on a Wednesday night, pre-show, at the Bernard B. Jacobs Theatre where he is starring in his first Broadway production as Gus P. Head in It's Only A Play. Micah has a somewhat shy presence and is tall and lanky, with a goofiness not quite unlike his character. After greeting me with a big smile, we settled down backstage, on a big comfy couch next to some chocolate and a bowl of Emergen-C (he swears by it), and launched into a discussion about his debut Broadway role.

How excited were you when you found out you had gotten the role of Gus?
Oh man, I was jumping around! That day, I was walking up Central Park West to meet Jack O'Brien at his place and I was really nervous because we were having a meeting with him. I had this umbrella and I was really nervous and I was thinking and swinging the umbrella and I whacked this lady in the face. I said - "oh my god, I am so sorry" - it was absurd. It was a giant sidewalk and there was no excuse. I was using the umbrella like a tomahawk.

Did you have to audition for the role?
No, I had worked with Terrence on another play, and he sort of had his backing behind me and ultimately Jack did too. So I met with Jack that day and we had a great meeting. He showed me pictures of his dogs and, for my audition, he asked me to tell him a dirty joke and not "get it". I couldn't think of any dirty jokes and I said "can I google one?" and he laughed and said something like "I guess you've got the job then".

Just like that!
I knew that there was goodwill and they wanted me to do it but Jack wanted to make sure we were on the same page before he gave the go-ahead.

Who's the first person you called when you found out that you had gotten the role?
I called my mother and father. They were super excited. They have always been supportive but it was a very tangible achievement to say that I had a Broadway role so it was exciting to give them that.

How are you similar or different from your character Gus?
I have two voices going on: I have a voice that is gullible and wants to believe everything that everyone tells me and then I do have this pragmatic part. I think Gus just doesn't have the pragmatic voice. In my everyday life, people say things where there is no possible way that it could be true but my first impulse is to say "really?" There is that duality.But having that duality is healthy; it's the balance that we all have. And I just let the scales tip a little more for Gus.

Have you ever broken character during a scene?
Yes ... Stockhard Channing has a specific rhythm energetically and she went a totally different direction with it one night. Just as brilliant and hysterical but it totally caught us all off-guard. And at first I wasn't looking at her. I was covering myself and making snorts and trying not to laugh. And then I look up and see that Nathan is doing the same thing - making little snorts- and Matthew's shoulders are shaking and we are all beet red and crying. Once we saw each other it all came out, and the audience roared.

It's a comedic role for you. Have you always been interested in comedy?
Young Micah was a ham for sure. Then I got really self-serious. I wanted to go to acting school and become a serious actor. Once I got there, I realized that it's all the same. It's about telling the truth and being real within whatever story you need to tell.

How do you get to that place of truth? I would think it's a very vulnerable place.
Maybe its boring to say, but part of it is training, at least for me.

What's your training?
SUNY Purchase. I went to the acting conservatory there. They teach you techniques so that you can dig deep and be vulnerable without it feeling unnatural or scary.

What was opening night like for you?
I didn't realize that it was going to be sort of a work night. You don't really get to see the cast and celebrate with them. You are celebrating with everyone who made it possible, and they are wonderful people, but there is a press line that you have to do before the party and then there is a lot of networking. My roommate was showing me pictures the next day and Angela Lansbury was there and Anna Wintour was there. I had no clue that they were even there!

Were you nervous before the show that night?
I was definitely nervous on opening night, especially because it was a room full of people many of whom were mentioned in the play.

Who were you most nervous for there to be in the audience?
It wasn't opening night but Meryl Streep came to the show. For that, I was nervous!

Did you get to meet her?
Yes. She was very kind. It was so cool.

Even within the cast - there is so much star power. Who were you most nervous to meet?
I mean, they are all rock stars. It was collective. I remember after I got the offer for the show, I knew it would be Nathan and Matthew and the names kept rolling in. And also it's going to be Stockard and F. Murray and it was absurd the names rolling in. I can't remember being nervous about a particular person so much as the collective.

What have you learned working with such talent?
Longevity and letting things be water off a duck's back. There's so much minutiae - tiny things that happen every day - and I think that at first when I was starting my career a tiny thing would happen and I would say "I f'ed that up and ruined everything" or "I can't move past this". Watching these people make mistakes and they get better, it's a great reminder that no one thing determines the rest of your day, or the rest of your scene or the rest of the run.

That's an important lesson not just in theater but in life.
Absolutely and at this juncture I don't know what the difference is because I'm here all the time.

Yeah, it would seem like it would be hard to have much of a personal life when you are doing a show.
You end up just having to take care of yourself. You have to be really good to yourself. I do that with a lot of juicing and chicken. And we have an Emergen-C station. I'm not a great sleeper so I've given up on that. But I do everything else that i'm supposed to do. I am the only person who hasn't missed a show. (knock on wood shouts a stage hand from across the room and we both knock on the table in front of us).

What's been the differences working with Martin Short versus Nathan Lane?
Marty and Nathan are both geniuses but in totally different ways. Nathan is very laser-like and has almost a military precision but also manages to be hilariously unhinged. For Marty, it's like playing a fun game of badminton with him and you get served up in a different way.

One of the themes of the show is waiting for the NYTimes review of the show-within-the-show to come out. In real life, was it nerve-wracking waiting for the reviews to come out?
I sort of avoided reading them at first. Because even if they are good, they get in your head a little bit. Or they are not good enough or there is one bad thing and you attach to that. And you still have to go do the show the next day. So it's not very helpful. Once I had been doing the show for five months, out of curiosity, I read it.

What's next for you when this run ends?
Don't know yet but I have some balls in the air. I'm looking forward to traveling to Ecuador, Seattle, Israel. I've been stuck, in a good way, for the past few years, so I'm going to travel.

Do you have any hobbies?
Not really ... I think I need some! I started to get into archery before I got into this show.

What's one thing that you would like to tell your 15-year-old self?
Chill out. I had a great childhood but I would have told myself to relax a little bit.

Any great advice you have been given by any of the castmates?
I feel like I've learned by example. They all treated me like an equal which was the best gift they could have given me. I learned more by osmosis and one thing I learned is that you have to make strong choices and defend your jokes, but you also have to be a team player. It's no fun not to be. Why be in a room of hilarious people and not be conducive to working with them. The best part of doing this is getting to hang out with kick-ass people. That's why I started it... because I wanted to make friends.

For tickets to see Micah Stock in It's Only A Play now thru June 7th, click here.