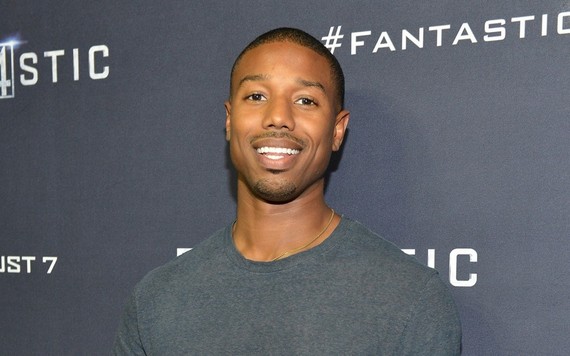 Being a hero is nothing new to Michael B. Jordan. A quick glance at his accomplishments, confirms: the Newark, New Jersey native stays winning. He's a four-time NAACP Image Award nominee and winner of the literary award for his 2008 four-part book series, Homerun Heroes. The 28-year-old serves as the celebrity ambassador for Lupus L.A., a cause that touches home as his mother was diagnosed with the disease. The affable actor even received a Loop Award for being a superhero fighting the disease at the Orange Ball.

Now, albeit in a fictional sense, Jordan takes off in a blaze as Johnny Storm/The Human Torch in Marvel's Fantastic Four reboot film, in theaters now. Still, that crusader connection hadn't dawned on Jordan until EBONY.com raised the issue during a one-on-one interview in the days before the film's release.

"Ah, that's pretty cool how you put all of that together," Jordan exclaims with a laugh. "Maybe it's something in the sub-conscious. That's crazy."

What's less crazy, at least these days, is seing a Black action hero in, well, action. The 2015 version of Fantastic Four pulls from the original classic comic series while adding a modern (and more diverse) twist. Sister, brother, genius and best friend unite with a dedication to the betterment of the world through scientific discovery. The outsiders are teleported to a dangerous universe where their physical appearances are altered and superhero powers activated in order to save Earth.

For Jordan, the potential blockbuster role was an amazing opportunity. "I've been a fan of comics, Marvel, Johnny Storm and Fantastic Four for a really long time," he shares. "When I came into the role, it's like I'm playing one of my childhood favorite characters."

But not everyone was as enthused.

For perhaps the first time in his career, Jordan's name circulated the interwebs not only for his #MCM recognitions, but because people disagreed with the film casting a Black actor in the role of a character previously peach colored. Equal (and unflattering) fanboy attention was drawn to the brother and sister relationship of his co-star, Kate Mara, who plays adopted sister Susan Storm. Mara, in case you missed it, is White.

Jordan eventually found he had to quiet the noise with an op-ed letter addressing and dismissing the outside racial tension. Showing restraint and maturity, the budding hero chalked the ugliness up to people fearing change and possibility.

"Being a part of projects that connect to people, no matter what color or where they're from, that's always been my approach. And moving forward, I'll continue doing the same thing," Jordan assures EBONY. "What drew me to Fantastic Four was the fact that [Johnny Storm] was a regular kid, regardless of skin color, just trying to figure things out. And I think that is what makes him relatable to me and anybody else."

Hopefully, Jordan can keep breaking down those color-coded barriers, following in the footsteps of actors including Will Smith and Denzel Washington. He's drawn comparisons to both, and rightfully so.

"When you start out in this industry, you don't have many choices," the dimpled entertainer explains. "I've just been blessed to play characters on incredible shows with incredible actors and writers, and going from project to project without being boxed and having the ability to learn and grow."

That growth is evident. Jordan--who entered the entertainment industry on a whim as a model after his self-described "awkward looks" caught the attention of a doctor's receptionist who encouraged his mother to get him into modeling--also "fell into" acting. But he concedes that his desire to perform didn't get serious until he watched his The Wire co-star André Royo portraying Bubbles, the troubled addict with a heart of gold.

"It was the first time I've ever felt lost in a character," Jordan recalls with evident wonder. "I've been chasing that euphoria ever since."

Jordan's chase has included TV roles on beloved programs Friday Night Lights and Parenthood, plus a sci-fi stint in the film Chronicle. But it was Jordan's turn in 2013's captivating, true-life story Fruitvale Station that successfully showed his acting range and catapulted him into the A-list.

The film, in which Jordan portrayed 22-year-old Oscar Grant, documented the events leading up to the Oakland native's controversial death at the hands of transit police in 2008. The heart wrenching, critically acclaimed film earned Jordan three awards and countless nominations.

"I've been really blessed," Jordan insists. "After Fruitvale Station, I got more freedom and liberty to be more selective about the roles that I chose moving forward."

Next on the actor's agenda: Creed, starring alongside Sylvester Stallone in the latest Rocky franchise installment, due out in November. He'll also helm Just Mercy: A Story of Justice and Redemption, the true tale of Bryan Stevenson, a young lawyer who founded the Equal Justice Initiative dedicated to defending the poor, women and children along with the wrongfully convicted. It's the meaty, meaningful type of role Jordan tailor-made for the broad-shouldered bae.

"For me, it's just about being diverse, doing things out of the box and playing people that expose me," he shares. "I choose projects that have heart and show humanity."