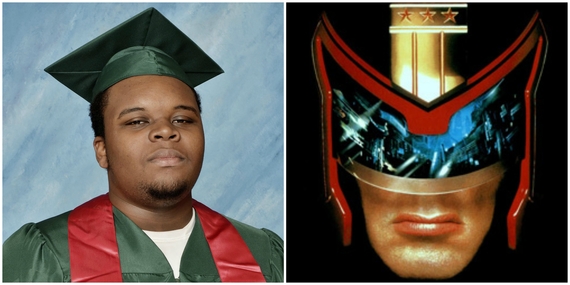 Aug. 9 marks a year since Officer Darren Wilson gunned down 18-year-old Michael Brown in the middle of a Ferguson, Missouri street. As you well know, the shooting sparked national protest against police brutality.

Now in Ferguson a new police chief, city manager, municipal judge and city council members have since been elected. Would these people have handled the proceedings after the shooting any differently? Probably not, but who's to say. The main thing is that the city is much different than it was a year ago.

Not much has changed in a year on a national scale, though. Police are still gunning down anyone they feel threatened by. Not even a gun can quell their "fears" versus an unarmed person. They aren't fearful of anything and I wish policemen would stop trying to claim that as an excuse. A gun is authority, therefore power. There should be no form of cowardice involved. Police are still assaulting anyone they feel deserves it, even if they break traffic laws. How petty. Whether you want to accept it or not, many of these people are black. Since the fatal shooting a year ago, 195 blacks have been killed by police . We are three times more likely to get killed by policemen than white Americans. Sure, you've probably seen statistics as such on some social media platform.

Some still are searching for answers regarding Brown's death. I was always taught that it is three sides to a story: your side, their side and the truth. Unfortunately, we've only gotten Wilson's side.

Some say Brown's hands were up, others say they weren't up as popularly reported or only raised briefly before he charged at Wilson, grunting, causing him (Wilson) to open fire.

Point is, we should not be searching for answers to questions that Wilson knows the truth to. Most people embrace closure. A year later and all we've gotten is excuses. That's what you call cowardly, Darren Wilson.

There is a movie starring Sylvester Stallone called Judge Dredd based on the British comic book series Judge Dredd. If you've never heard of the movie/comic book series as I hadn't until a couple weeks ago after coming across a reference to it as a comment on an Huffington Post article, here's the connection to today's America.

The movie sucked according to critics. The message however, unfortunately holds true in today's American society.

In the crime-plagued future, the only thing standing between order and chaos is Judge Joseph Dredd (Sylvester Stallone). His duty: police the violent metropolitan sprawls that crowd the decaying earth, and kill criminals on the spot if necessary. The tables are turned, however, when maniacal ex-Judge Rico (Armand Assante) frames Dredd for murder. But, as his opponents soon discover, not even a prison sentence can stop Dredd from doling out his signature brand of justice.

So what does Darren Wilson killing Michael Brown have to do with a box office failure?

In Layman's terms, Judge Dredd never apologizes for his very obvious heinous ways of law enforcement from a real-world view. He kills when he feels the need and faces no punishment. That is until the tables were turned on him. Not even incarceration stopped Dredd from enforcing the law as judge, jury and executioner.

Policeman kills unarmed person. Policeman is punished. So what? Police still kill because the law might allow them to be one of the many who made it out unpunished. You know, like how Darren Wilson used the Use of Force doctrine that exists in Missouri and the "fleeing felon" policy, which gives police a legal right to use force to prevent a "fleeing felon" from harming the public. One of the stupidest pieces of policy I've seen.

Not even one, two, or ten punished police officers has stopped that same amount from killing yet another unarmed, mainly black American due to the belief that the the legal system has a great chance of playing out in their favor. Sad, but that's probably a true thought in their minds before and after the act is committed.

Police in America serve as judge, jury and ultimately executioner.

It has been time for reform. Judge Dredd does not exist in the memories of moviegoers and its message should not exist in American society.