WASHINGTON -- The Million Mask March, an Anonymous-affiliated group of protests, reached both the nation's capitol and Ferguson, Missouri, on Wednesday. In Washington, protesters who were organized outside of the Department of Justice building gave varied reasons for their demonstrations, from solidarity with Ferguson protesters to speaking out on climate change, while those in Ferguson stood outside the police department, marched down high-traffic streets, and allegedly planned to shutdown a major interstate.

The events in Ferguson led to two arrests, and marked nearly 90 days of protests in the wake of the death of Michael Brown, the unarmed 18-year-old who was killed in the St. Louis Suburb in August.

The St. Louis County Police Department said two protesters were arrested Wednesday night for "impeding the flow of traffic"; one of the two arrested was also charged with third-degree assault on a law enforcement officer and with resisting arrest.

On Wednesday, police in Ferguson also took into custody the driver of a truck that carried a large sign reading, "Gov. Nixon: What will you do in this moment with the world watching you?" According to a statement from St. Louis County police, the truck had blocked roadways and "at one point, the truck and protestors blocked the passage of an ambulance on an emergency run."

Meanwhile, in Washington, D.C., a protest attended by a couple dozen people proved to be slightly less eventful.

Beth Henry, 60, a retired lawyer, traveled to the nation's capital from Charlotte, North Carolina, to protest against the Federal Energy Regulatory Commission and gas exports. She instead found herself chanting "Justice for Mike Brown!" outside of DOJ.

“While we were here, we wanted to show our solidarity with the movement for Michael Brown’s death, holding the police accountable, and stopping racial profiling," Henry said. "We were in D.C. to work on global warming, but we care about this issue as well." 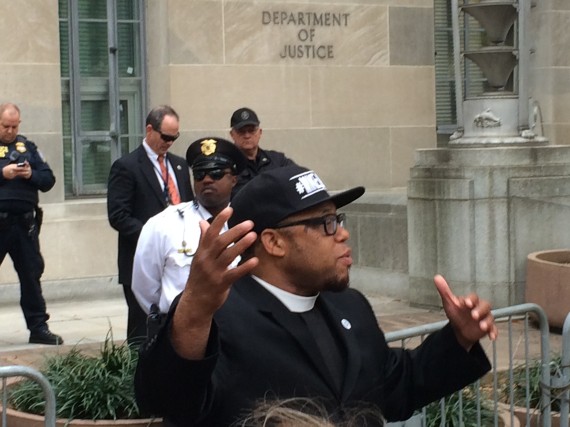 Reverend Lennox Yearwood and CEO of the Hip Hop Caucus delivered a passionate speech to protesters outside the Department of Justice. (Photo: Ryan Reilly/HuffPost)

“I think about Michael Brown and his family," Henry said as she marched with the small group of protesters. "I have two sons and they happen to be white like me, so I listen to my black and brown friends tell me how scared they are to have their children go out at night.“ 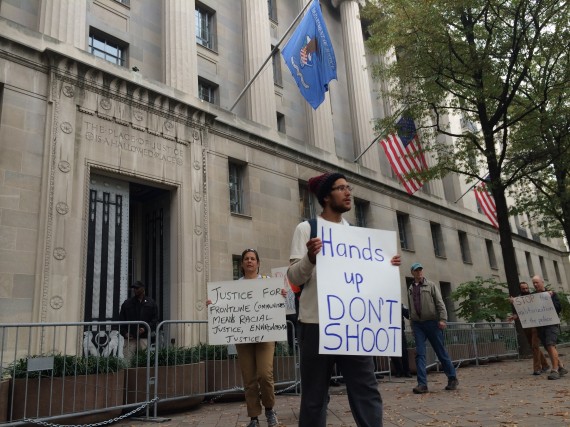 Protesters hold signs while marching outside of the Department of Justice building. (Photo: Ryan Reilly/HuffPost)

The Justice Department, she said, needs to "stop police from racial profiling, shooting people that have their hands up, and from using too much force."

The St. Louis County Police stated that a "truck and protesters blocked the passage of an ambulance on an emergency run." A video recorded by protester Bassem Masri, however, suggests the ambulance was not obstructed.
Broadcast live streaming video on Ustream

“Natural gas infrastructure and climate change has been building over the last 20 years. I’m concerned because my great-grandchildren may not have an earth that’s livable if the climate crisis keeps accelerating at the rate it’s moving now,” said Norris. He estimated that more than 60 environmental protesters have been arrested this week in Washington while demonstrating.

Many of the protesters felt that the environmental issues were connected to demanding justice for Mike Brown because both are related to government operations.

Norris said people of color are affected by police brutality as much as they are by environmental issues.

“The tie-in is that the environmental crisis and climate change impact people of color and poor people far more than they impact me,“ he said. “It’s a huge injustice that we are all being victimized by the government. They can stop this.”