In his final moments of life, Michael Brown charged toward Ferguson police officer Darren Wilson, shrugging off warnings to stop and seeming to ignore at least one bullet that wounded him, while reaching to his waistband as if to pull a weapon.

Or, he sank to his knees, raised his hands and shouted, “please don’t shoot me.”

Wilson shot and killed Brown on a suburban Missouri street on a Saturday afternoon. Nearly two dozen people said they saw the events unfold. Yet when asked to describe the last, crucial seconds before the fatal shots were fired, witnesses told investigators and a grand jury convened to investigate the death starkly different stories, a review of witness testimony reveals.

On Monday, the St. Louis County grand jury investigating the shooting declined to bring criminal charges against Wilson. In a news conference Monday night, the prosecutor said the witnesses who said Brown had tried to surrender just weren’t credible. The announcement sparked a night of angry protests in Ferguson and denunciations from civil rights leaders as well as Brown’s family.

Without conclusive forensic evidence, the decision not to bring criminal charges relied heavily on the testimony of people who watched the deadly events unfold. The below graphic charts these differing accounts, showing which witnesses claimed Brown ran toward Wilson before he was shot, and which witnesses said he stood still or got on his knees: 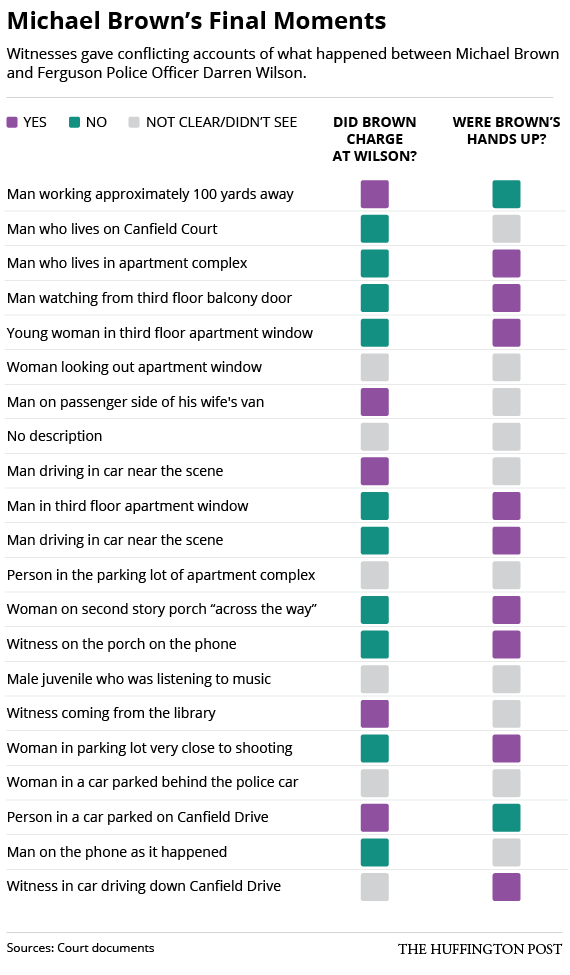 Witnesses generally agree on many important details before that final showdown: Wilson stopped Brown and a friend, who were walking in the middle of the street. Wilson and Brown tussled, with the teenager reaching inside the car, and at least one shot was fired, grazing Brown’s hand at close range (forensic reports appear to confirm that Brown was shot at close range). Brown ran away; Wilson got out of the car to follow on foot.

Five witnesses said Brown charged or moved toward Wilson immediately before the fatal shots. Ten witnesses said Brown was standing still or had sunk to his knees, and looked as if he was surrendering. Another six said they didn’t see the shooting, or weren’t clear in their description of what happened.

Several witnesses who described the showdown did not say one way or the other whether Brown rushed toward the police officer -- a surprising omission from the record, given that this was the justification Wilson used to defend his fatal shooting of the teen.

Wilson himself said during his testimony that Brown stopped running, and instead of dropping to the ground as ordered, turned and charged. Wilson said he was afraid for his life. “At one point it looked like he was almost bulking up to run through the shots, like it was making him mad that I was shooting him,” he said.

Witness 34, a man driving in a car near the scene, agreed with this basic version of events. “All of a sudden the young man he turned around and started coming back towards the officer ... then the officer shot him a couple of times,” he said.

Two other witnesses, one in a parked car and another working about 100 yards away, also said that Brown charged Wilson before dying in a hail of gunfire.

But many other witnesses told the grand jury that Brown had raised his hands, had stopped moving and had tried to surrender before being killed -- or some combination of the three.

Two witnesses, a man and a woman watching from a third-floor apartment window, said that Brown sank to his knees and put his hands in the air before he was shot and killed.

A woman smoking a cigarette in a parking lot that was “very close” to the shooting said that Brown put his hands up, and did not charge. She said she “knows” she heard Brown say “I give up” before he died.

“The officer got out, kinda gave him a chase and that’s where I see Mr. Brown slow up and throw his hands up," she said.

Another witness, driving in a car, wasn’t quite sure. The man said Brown either stumbled toward Wilson, or walked toward him, after he was ordered to stop. "Regardless of why they died or who it was that died, it just it could have been anyone, anyone,” the witness said. “I was a little distraught over seeing someone gunned down."