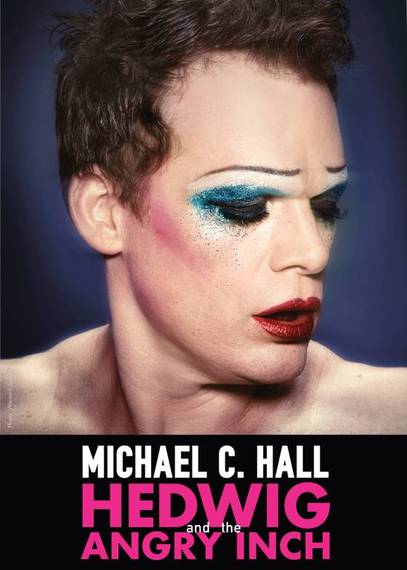 When interviewed about the opportunity to take on Hedwig and the Angry Inch, Michael C. Hall had a quick answer. He told Broadway.com, "It's maybe my first and last chance to live out a glam rock fantasy, so it was kind of a no-brainer." Calling the rock musical a "profound" work, with music that "kicks ass." If a performer isn't prepared there is little doubt that Hedwig and the Angry Inch could do the same to an unsuspecting ego, because this isn't a part for just anyone willing to say yes.

It certainly allowed the star of Dexter and Six Feet Under to channel the beauty and grace of David Bowie, with the physical fortitude of Mick Jagger. Hall took the stage last Thursday and I got a chance to catch him at the Sunday matinee, just four performances into this voyage.

Everyone has a different experience seeing a performer in a character's skin, but my immediate impression of Michael C. Hall as Hedwig is that there must have been something in the characters he's played before, particularly Dexter, that allows him to tap the raw tragedy of being on the outside watching the world experience the basic human need of love and normalcy. Can being in the skin of a serial killer who targets society's villains prepare a performer emotionally for evoking empathy and communicating simultaneously what it's like to be ostracized in society for simply being who you are? Just maybe.

John Cameron Mitchell, who wrote the book for Hedwig, attests that others who've played the part have found it daunting and he believes it's "the most demanding role that exists in theater." "Hamlet doesn't have to sing 12 songs in heels and dancing around," says Mitchell.

I'd be remiss if I didn't mention that back when I was on Broadway, the more difficult the production, the longer the previews, with original productions taken on the road to work out any kinks before unveiling the final product to the most critically astute theater goers on planet earth. Given the task set for Michael C. Hall it's even more extraordinary that he jumped into Hedwig and the Angry Inch last Thursday, with the publicity photos the only warning of what extraordinary delights might await the audience. No previews, no easing into the production, just Hedwig on fire the first night out. That he's following in the steps of Tony winner Neil Patrick Harris, who brought down the house at every performance, makes stepping into the role more exciting for everyone.

If you don't know the story, the condensed version goes like this... Hedwig is an "internationally ignored" musician and songstress from East Berlin, whose botched sex change operation left her with "an angry inch."

Co-star Lena Hall, who won a 2014 Tony Award for her role, is so instrumental for anyone new stepping into Hedwig that it had to make the jump into the deep end of the Broadway pool less chilly for Hall. Their partnership on stage is so critical to pulling off this theatrical feat, the interplay between them still so new, the seamlessness of watching them interact was half wonder, half miracle.

On Sunday, the house was packed, noisy and the anticipation could be felt everywhere inside the Belasco Theater. If people had seen the publicity shots released just one week earlier they might have been prepared for seeing Michael C. Hall enter from the rafters. However, nothing could prepare you for the physical prowess his persona presented on stage.

Hall as Hedwig is a physical goddess, thigh muscles rippling as she struts across the stage one minute, then the next minute lowers to a full knee bend, crouching and jumping, climbing the side of the stage a second later. All done while belting out rock lyrics and pleading for acceptance in angry defiance for being who she is and expecting to be loved for it, too, just like any other human being.

In the opening moments it was clear Michael C. Hall was still tackling the logistics of walking down the hood of a car while singing and maneuvering up treacherous levels as he dragged an endless microphone cord from one part of the stage to another. All while also moving set pieces and managing the head choreography of whipping long blonde hair around while missing her face.

It lasted a split second.

The material demanded Hall grab the gears, focus and master Hedwig's message, leaving you in awe watching her quick temper turn to wrecked tenderness and vulnerability of a person in a world where being different not only was a curse, but when getting help to experience your own self-actualization could be medically treacherous.

It's when the music is unleashed and those moments when the energy is bottled into quieter reflections that you appreciate the valve needed on such an explosive emotional experience of being Hedwig.

As theatrical characters go, as in life, taking on the deepest parts of ourselves and accepting who we are naked, not as society wants us, is always the greatest exploration. It's also something that not all of us are able to see through to the other side.

When Michael C. Hall stepped back out after curtain call for a quick second, lapping up the thunderous ovation, he blew the audience a kiss, because he knew that we'd felt what he'd felt, too.

______________
Taylor Marsh is the author of The Hillary Effect on Clinton's rise and the 2008 election. Her third book is titled The Sexual Education of a Beauty Queen -- Relationship Secrets From the Trenches.