"Michael Clarkson got to the next millennium before the rest of us did... his research and theories on the powers of the human mind and on the fight-or-flight system and its amazing, mysterious powers are well ahead of his time." -- The Amazing Kreskin, mentalist and television star.

Two things make me laugh here when I decided to reach out to Michael as I look to report on interesting figures. I learned after the fact that 1) after reading up on him saw he talks about Amityville Horror (I will forever be linked to that I think) and 2) that he also writes for The Huffington Post so I was destined to do this in-depth, honest interview with him in Canada.

Michael Clarkson is a non-fiction author and professional speaker who has spent 37 years as a print journalist, winning numerous awards for his investigative pieces, including the Canadian National Newspaper Award twice. He was a finalist for the U.S. Health Care Award in 1995 for his investigation of prescription drug abuse in Alberta, Canada. As a police reporter, he was twice nominated for the Michener Award for public service in Canada and in 1980, he was nominated for a Pulitzer Prize for his story about reclusive author J. D. Salinger, who he met twice in New Hampshire. Clarkson has also been a sports reporter interviewing famous athletes such as basketball legend Michael Jordan and golfer Tiger Woods. Three of his books are on fear -- Competitive Fire, Intelligent Fear and Quick Fixes for Everyday Fears, which have been published in the United States, Canada and in Europe. His latest (2010) is The Secret Life of Glenn Gould, about a famous classical pianist. 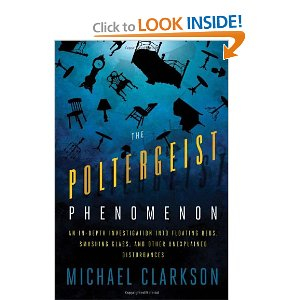 The Poltergeist Phenomenon: An In-Depth Investigation Into Floating Beds, Smashing Glass, and Other Unexplained Disturbances is the first and only non-fiction book this veteran journalist wrote. Due to mainstream popularity more-so today versus a couple of years ago, when I spoke with him, asked what happened with this book? Did it take well considering Michael is no stranger to journalism and writing but was one in the paranormal genre. He felt that, "perhaps people thought or believed Poltergeists were the same as Ghosts." This might have created a disconnect. He states, "I would stress that I don't believe there's solid proof for them, but I would not say I don't believe in them." He goes on to further explain that "The topic of poltergeists has fascinated me for a long time, even before 1980 when a young man who had been the center of such a case came to my house in Niagara Falls, Ontario, to talk about his experience. Since then, I have been following with added interest as such cases pop up from time to time in the media and in scholarly publications. During the past five years, I have been closely examining the cases which appear in my book."

Onto the fort and turkeys... I found Michael to be a straight-forward realistic thinker with a no holds barred attitude towards life. He approaches his 60s with a different vigor and vitality then when younger. Connecting with nature gave and is giving him a human reboot. Tired of having a tantrum when the computer went down or the insatiable need to be with his iPhone as intimate as a family member, built his very first physical item in his entire life... The Fort.

Friends and family often refer to Michael as a pencil-pushing, city-dwelling persona. These past couple of years has shown them all as well as himself, this was not the case. Back to nature to deal head on with fear and stress factors became more pronounced as the educational personal plight continued. Michael says, "On Google, I can visit any world via the cyber route but never too my own back yard." A very clear testament to conforming to societies demands, expectations and needs as we evolve technologically into the future... forgetting many a times, our past and roots.

When I asked him was this more of an experiment, he replied, "I'd call it more of an education. There's no B.S. in nature unlike society." As his family and day-to-day life was getting on his nerves, The Fort began to represent a possible solution and reevaluation at the same time. His version of a traditional man-cave is much more humbling, honest and real to nature. Having to urinate all around the fort to keep off predators, opened up the fascinating and exhilarating opportunity for Michael to garner the trust in some wild turkeys. He tells me that, "I became a prisoner of my own life and that was my red flag alert," much like when our iPhone alarm goes off.

He learned and adapted to see life through photography frame by frame and went back to see it all unfold again as he lived and is still living it. He even learned to slow down his metabolism. When I asked him if any modern day items made their way into his fort he said, "Well I try to get as close to not using anything but it is a comprise. I do need a lamp to do my writing but I make my own fires."

He also tells me that because of his urinating dance, the predators are away and he can observe and interact well with the other animals. Wild turkeys would come up to him as if to begin an unspoken conversation between man and animal. At night he hears the coyotes sing. There are even wolves and cougars behind the fort but that doesn't scare off Michael. When he wrote his book, The Poltergeist Phenomenon he was well-prepared for the fort without knowing it at the time. Fear is what we make of it or do not understand. Stress follows that fear and Michael's bravery and willingness to openly pursue this moment in time, showcases the depth us humans can and do reach. Unplugged and in-Googable. He is accepting of this new natural reality and is going with natures flow.

"Leave the warriors of the world behind..." -- Michael Clarkson