Klein Artist Works hosted Chicago's Museum of Contemporary Art Chief Curator Michael Darling last Fall for an online webinar. His generous insights into what he looks for in art and artists, and how he looks, are highly informative for artists and appreciators of culture anywhere. A glimpse into how Klein Artist Works - a program to empower artists and enable success - functions, Darling's extensive comments were so valuable that I asked him for permission to transcribe and distribute them broadly. He agreed, suggesting that how museums and curators operate should be transparent and available. The following is an excerpt. 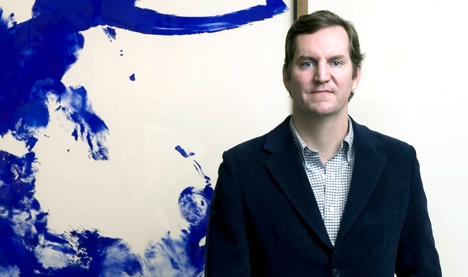 Michael Darling A lot of the thinking I pass on to you tonight is based on experience I've gained over the last almost twenty years. Though I've worked as an art historian, a critic, and a curator I think first of myself, first and foremost as an art lover. Then I try to define what it is that I love about art, and often times it's really the excitement about finding something new, the excitement about having my mind opened up to new experiences and to learn new things.

Of course, when you set out to do something like that, you start to have to come up with ways to communicate What's good? What's bad? What's exciting? What's worthwhile? What's not? That's been, in many ways, kind of a process that I've been going through over the last twenty years; trying to come up with definitions that work, trying to come up with rationales and a way that argues for work that can be clear, that can be transparent, that makes me accountable in some ways so it's not just, "I know what I like when I see it" but really have some sort of rationale as to why THIS art is worth putting on the museum walls, why THIS art is worth writing about, why THIS art is, perhaps, worth spending somebody else's (usually not my own) money on in order to bring it into a museum for eternity.

One of the things that I've found to be most useful lately (as an analogy) is really thinking about art, or I should say artists, as comparable to advanced researchers in, say, medicine or maybe mathematics or physics. I've learned to accept a certain professionalism that has crept into the art world and has clarified it in a lot of ways, which is something that it didn't used to be. It used to be more mysterious and artists just went into their studios and made things and hopefully amazing things would come out. With the proliferations of art schools over the last 50 years, really, since the G.I. Bill after World War II, the art world has become more and more professionalized with, of course, MAs and MFAs and BFAs, and all those sort of degrees.

For a lot of people it may seem like it was taking some of the mystery and mystique out of art. But I actually think, or have come around to appreciate the fact, that this is the best way for artists to gain a certain kind of critical approach to their work that allows them to know what they're doing, that allows them to know what's been done around them, or what's been done in history, and, in many cases to really equip themselves with the tools to help to deliver their art to the world.

One of the things that makes sense about this idea of an artist being some kind of advanced visual or perceptual researcher is, also for general audiences, that it allows... justifies why we would pay attention to these artists and, "Why you would come to a museum or a gallery?" Well, it's to kind of find out what is going on at the advanced edges of culture where visual art is being pioneered.

Now, opposed to reading about these things in some kind of specialized journal, art has the fantastic outlet of places like galleries and museums, and it's primarily visual. So, these are things that can be shared, in many cases, without the need for a lot of text and reading. The other thing I like about this model is that it also (if you were an advanced mathematician or something) you would know everything that had been done in your field already up to that point. You knew what all the research was, where all the breakthroughs were, and it was your job to push your field to the next step, at least if you wanted to be a mathematician of any kind of note. That's really the burden artists bear today - if you're a sculptor you need to know everything that's happened in sculpture and figure out where you can actually uniquely contribute to that tradition and push it forward in a new way.

(Click here to be redirected to the complete article.)