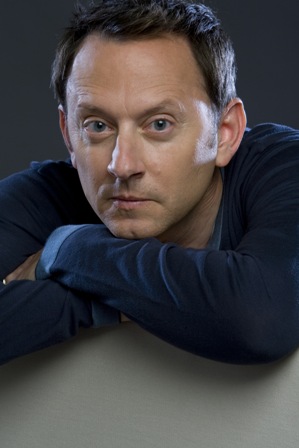 John Locke was... a believer. He was a man of faith. He was a much better man than I will ever be, and I'm very sorry I murdered him.

That's probably the best eulogy in television history (though the worst in nature), and it was delivered by Ben Linus as he bid adieu to an old friend/foe he killed on the groundbreaking series Lost. No words have ever embodied a character more on or off the island throughout the show's run: Linus is a deeply conflicted man who is always deceitful, sometimes heroic (it seems anyway), and a step ahead of everyone else. Well, the latter's been true until this season. We'll learn more next week when Linus is the focus of a present day/flash sideways episode.

In an interview Feb. 26 -- days before he received the first of the final three scripts -- Emmy Winner Michael Emerson reflected on his character and speculated where he and "the others" may end up. He also weighed in on online theories which have spread like island wildfire throughout the 4 ½ year run. "At this point, I really devour each new script. I'm looking to see where this train is headed. Come April 20, we will be done filming forever," he said.

I'll stop talking, and let "Ben" speak for himself -- which he always does.

I love that moment. I emailed the writers and thanked them for that eulogy. It sums up a lot of my Lost experience, what I think about my character and what I like to play. On one level, that eulogy is absurd: Mourning the man you have murdered. Yet I believe Ben feels the loss [of Locke] more than anyone else in that scene. It's played truly on one level and absurdly on another.

You've already told me that you're filming next week so I take it that means Ben is still alive by Episode 15. Or perhaps not.

[Laughs] We've had so many casualties so far that we've gotten to the point where some characters are only alive in certain realities.

Coming from a theatre background, I'd imagine it must be nice to have a character who changes with each episode it seems. He could be a villain one minute, and a leader the next, or both. Ben's so complex.

Yes. It's good. I'm happy to just roll with it. I always have been. I never had to stay in my character's goodness or villainy or any of that. All I have a stake in is having great scenes to play. It's so simple: play it as it's written, as straight as I can, and let the audience decide what's going on.

I'd imagine you didn't know when you signed up for this how important Ben would be on this show. The writers probably didn't either.

Yeah. I think that's true. They didn't either. They took a liking to things they had created and then began to see ways it manipulated into something great and compelling.

You're frightening and intense on screen. What are you off the set?
I'm the least frightening person. I'm a people pleasure you know. I'll be finding you a chair and fetching you a drink.

Do you go all method when you're in Hawaii filming?

Oh no. I'm the furthest thing to a method actor. I clock in and clock out of that. I don't have to get myself wound up to a fever or put myself in a dark place or anything like that. Playing the scene provides me with all the sort of darkness I require. I'm pretty easy on the set.

I know the writers/producers are so specific, but is there a fair amount of adlibbing on the show?

We're fairly strict with our scripts but I have occasionally -- because I know my character --suggested a change of a word or a term or phrase but you always run that by the producers before you do it. We don't change script things without approval. Good actors can find ways to extend the line as it's written and make it mean whatever they want it to mean.

There are so many theories on the web. Do you ever read any of those or does it ruin the fun?

I don't pay too much attention of what's said online. That's like a second job trying to keep track of all of that, and usually it's disappointing. Usually it's something that the writers denied three years ago so why are we still talking about it? That sort of thing. Whatever the final solution is, which I think will be fairly complex, I have heard the writers say they've seen people get very close online. But, they would never respond to it in anyway.

Do you have any of your own theories?

I had some kind of shallow theories three or four years ago but they've all been blown out of the water. I'm waiting to see. It'll have a lot parts I think. I don't know.

As a viewer, it's always amazed me that each episode seems to answer a question but pose so many more. The fact viewers are so loyal and not fed up really is an amazing testament to the writing and the acting...

Yes. I think it's the challenge of being on a series that runs for awhile. How do you work within your format, keep it fresh and interesting and not over stay your welcome. And mystery is a hard thing to nurse for years on end, but we've managed to do some of that.

Is there anything that you've filmed this season that has an OMG factor?

This season? Oh yeah. [But] there have always been things that blew my mind: The extermination of the Dharma Initiative, the strangling of John Locke serving dinner to Juliet -- all of those things. There are always odds and ends when I look at the script and say 'you've got to be kidding me. This is wild. Who thought this up?' And of course we continue in that tradition right down to the last season.

Without giving anything anyway, where do you see this season going...

It's beyond me. I kept thinking that I would see or feel the ending coming. But it hasn't presented itself yet, and I've read all but the last three scripts. I'm expecting some big shock-a-roo.

If you had to write your own perfect scenario with how Ben or the show ends up, what would it look like?

I'm torn about it. Part of me would like to think let's have some kind of sensational death. Then part of me says 'no, lets be true to what we've always done and just have Ben sort of slip off in the sunset unresolved... doomed to follow his quest forever.' Maybe that's even more satisfying. Leave the audience thinking Ben is out there doing his thing forever.

He's such a conflicted person.

He is. We don't know whether he deserves punishment or celebration. But he certainly has some things to atone for. Maybe Ben already exists in a purgatory of his making and he needs to dwell there a lot longer.

Maybe ABC can spin off Ben into a half-hour sitcom from the flash sideways. Ben: The History Teacher...

[Laughs] That's a funny idea. He's a European history teacher. You know, that's a funny notion. I don't think that's really true, but you never know. Do you? I've felt I'm secretly in a comedy on Lost. Maybe I'm the only one who knows it.