Judging from his paid obituary, Michael 'Flathead' Blanchard was one heck of a guy.

In an obit published in the Denver Post, Blanchard is described as a man who enjoyed "booze, guns, cars and younger women until the day he died."

Weary of reading obituaries noting someone’s courageous battle with death, Mike wanted it known that he died as a result of being stubborn, refusing to follow doctors’ orders and raising hell for more than six decades. He enjoyed booze, guns, cars and younger women until the day he died.

So many of his childhood friends that weren’t killed in Vietnam went on to become criminals, prostitutes and/or Democrats. He asks that you stop by and re-tell the stories he can no longer tell. As the Celebration will contain Adult material we respectfully ask that no children under 18 attend.

The Post's link to the obit on its Facebook page engendered a lively discussion amongst commenters.

"Kudos to his family for honoring his passing the "WAY" he wanted and probably the way he lived," one commenter wrote. "Very spirited. RIP 'Flathead'."

"Hilarious and the only way to go!" wrote another.

"I think he would have despised me, but that ROCKS!" wrote an impressed commenter.

Twitter lit up with references to Blanchard as well. Some called it the "best obit ever."

One user stated what is clear to anyone who's read the notice: "He was obviously the life of the party..."

Leave your thoughts in the comments.

LOOK: The obituary as it appears in The Denver Post: 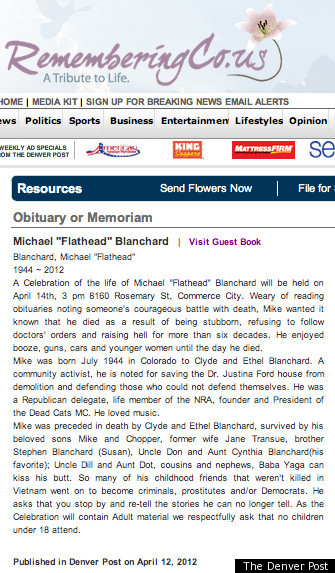