Michael Jackson, the King of Pop, lived from August 29, 1958 to June 25, 2009. He had a prolific music career, in which he revolutionized the music video and popularized dance techniques such as the robot and, more famously, the moonwalk. He also produced the best-selling album of all time (Thriller in 1982) and is the most awarded recording artist in the history of popular music. 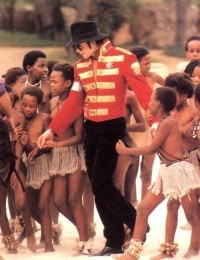 In 1992, following the production of his music video for Remember the Time in which he appeared as an entertainer for a pharaoh, Michael Jackson went on a tour of Africa, starting in Gabon. The Ambassador to Gabon, Keith L. Wauchope, recalls the time he had this brush with the King in an interview with ADST in 2002. Read the entire account on ADST.org. This account was edited by J. Vogl

WAUCHOPE: I should say a word about some of the prominent visitors Gabon hosted in the last six months of my tour. The most bizarre was the visit of Michael Jackson, the great Michael Jackson.

[Jackson is] a very strange individual indeed. Apparently, he had been doing a music video about Egypt in which he played a young pharaoh, when the idea of visiting Africa seized him. [Gabon President Omar] Bongo's son Ali had had friends in the entertainment industry in the United States and he extended an invitation to Michael Jackson to come to Gabon.

So, Michael Jackson assembled a group of people, and they worked up an itinerary to Africa. It was the most extraordinary visit that one could ever possibly imagine. He arrived in his own chartered 737 aircraft.

Everybody on the plane was an African-American except for one English fellow who was a holistic healer from the Caribbean. The party was accompanied Irv Hicks, an old AF [African Affairs Bureau] hand, as the State [Department] liaison person. I've known Irv for many years, and he seemed bewildered as to the purpose of the trip and his role.

The visit began to unravel from the moment Jackson's plane landed. First, there was an endless delay for Jackson to deplane, and it seemed the President's entire family including all their kids, were waiting in the VIP lounge. They hoped for a photo opportunity with the great entertainer. He was apparently enthralled about coming home to Africa and hesitated at leaving the aircraft. 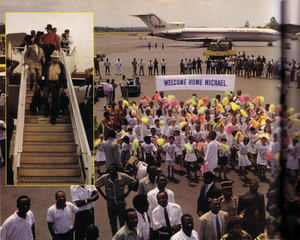 One of his security men finally went up and assured him that everything was fine. The understanding was that he would come down to the VIP lounge and spend a little time with the president's family, schmooze and then leave in a limousine the President had laid on for him.

When he finally raced down the ramp, he looked like Mickey Mouse. He had a red shirt and black pants and he wore white gloves. He had on a wide brimmed hat with hair streaming out underneath so you could barely see his face. He has an affectation of putting his hand to his face like this, which came back to haunt him.

As he brushed past, I tried to introduce him to the President's daughter, who was the Foreign Minister. He raced through the crowd with fans screaming from the balconies of the main terminal, charged through the VIP lounge with his bodyguards pushing people out of the way. By this time, crowds of fans on the grounds around the airport and from the balconies above us were erupting and screaming. It was like an explosion.

He and his guards roared to the limousine parked in front of the VIP lounge. He jumps into the limousine by himself with a couple of his security people. The escort had no idea what's going on. The motorcycle policemen were befuddled, but when Jackson stood up in the sun roof and started to wave, the crowd surged forward screaming, they start to form up. Jackson panics and ducked down and says, "Let's get out of here."

The escort blasts through encircling crowd and disappears toward his hotel. I apologized to the Foreign Minister, and said to his people that we have no role to play in this visit, but we were prepared to assist his party.

That afternoon there was an event at his hotel and the President's daughter was also supposed to be there and kids from the President's family. My older boy was on the stage with an international children's choir performing for Jackson. We were sitting close to Jackson and we noted that he had one of those little boys, 13 or 14 years of age, with him whom he described to us as his nephew... He constantly had his arm around the boy... It was later revealed that he had these relationships with young boys, which landed him in deep trouble. 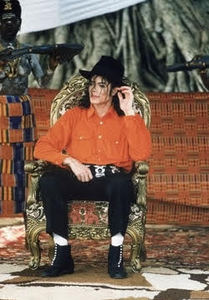 The people in Jackson's party were almost as bizarre as Michael himself. They described him as a "gift from God" and they virtually worshipped him. For his second day in country, Ali Bongo had arranged a trip to several cities in the interior. I asked the PAO [Public Affairs Officer] to accompany the party and offer to interpret and to provide advice. She had the most extraordinary experience.

They were given an Air Gabon plane to take them up to Oyem in the north, and then down to Franceville. In Oyem, the people thought Jackson would perform, but he had no intention of performing. His trip was being videotaped to work into a possible music video. In Oyem, when they found out he wasn't going to perform, they went ballistic. They charged across the big public square and his people panicked. Once again they hauled him away, and raced back to the airport where the military could hold off the crowds back.

He left immediately for Franceville. This was considered to be Bongo's hometown, it had more amenities than you could expect to find in the African bush. Air Gabon, which was run by the French, told Ali Bongo that it had to have the plane back to fly regularly scheduled flights that evening.

The plane returned to Libreville and Jackson and party are stranded. The people in Jackson's entourage went into panic mode. It seems that Michael Jackson has to sleep every night in a special container to preserve his complexion and his many plastic surgeries.

The people around Jackson were just unreal; it was like some sort of a cult. All efforts to obtain a replacement aircraft failed. There is a luxury hotel in Franceville that is seldom more than 10 percent full. Obviously he survived a night without his container, but when he returned the next day there was a good deal of unhappiness about that episode.

On this, his last day in Gabon, there was to be a presidential presentation of a medal, something like the Order of the African Elephant [actually the Medal of Honor.] I was asked to attend, and while awaiting the festivities, I was in the waiting room when Michael Jackson arrived. In lieu of the little boy, Michael Jackson entered with a baby chimpanzee clinging to his midsection. 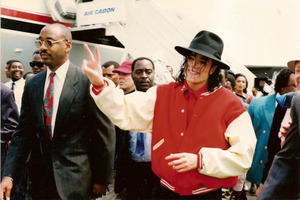 The President's son introduced us and I was amazed at how little presence this mega-star exhibited. His handshake was limp and spoke in a mumble. The conversation turned to arranging to take the chimp back to the U.S., and the President's son says, "I'm sure the American Ambassador can make arrangements to help you to take this chimpanzee to the United States."

I said, "It's not going to happen. They are an endangered species and there are endless restrictions on importing chimps." Even research institutions take months and months to obtain permission.

Ali Bongo replied, "I'm sure you can overcome all that." I offered no hope.

Inevitably the chimp's mother had been killed by poachers and it would cling to anyone. Someone took the chimp from Michael before he was ushered into the President's office. Jackson's PR people wanted to videotape the whole ceremony. I went in before him and was part of the furniture. From there I could hear the exchange between the President and his son.

Of course Michael and his people didn't speak any French, and had no idea what's being said. Bongo said to his son, "Now, tell me again, who is this guy? Why am I giving him a medal? What has he done for Gabon?"

Bongo was completely bemused. When Michael Jackson entered, the lights went on, and pictures were taken, hands shaken and finally the pinning on of the medal. Michael Jackson said a few whispered words.

In any such event, after the presentation, the lights go down and the two principals usually sit down and have an exchange of words. Michael had almost nothing to say. The President thought, well, okay, I guess this is finished. He essentially dismissed Michael Jackson, the lights go back on and Michael Jackson leaves the President's office. His managers had set it up a photo op those who had missed the chance previously. They went to one of Bongo's very opulent receiving rooms on the ground floor as backdrop.

All I wanted was for Jackson and his people to leave; his flight was at 2:30. They asked me if I wouldn't like to have my picture taken with Michael Jackson. I demurred, while for half an hour they ran from one side of the room to the other taking photos with various family members on a banquet with Jackson. Finally he and his party departed for the airport and he was gone. I sent a telegram, advising the embassies on his itinerary to be aware of this bizarre individual and his party of sycophants.

Overall, his visit to Gabon did not redound well for Ali Bongo and his father. The opposition, who now had their own newspapers, asked, "Who is this guy Michael Jackson? We thought he was a black American, but he doesn't look like one." Because he has a very pale complexion, they seized on that to criticize the Bongos.

They criticized Michael Jackson for not performing. Jackson's affectation of keeping his hand in front of his face, which I assumed was a symptom of shyness, was seized upon as a sign that he didn't like the smell of Africa. This issue arose again when Jackson went on to the Cote d'Ivoire next.

The African press reamed him over the implication that he couldn't stand the smell of Africa. It was unfair, but the trip proved to be a disaster and he curtailed the rest of his trip. I think he went on to Tanzania, but then he returned to the U.S. He was going to go onto Egypt but the trip just fell apart. That was my brush with real fame as far as I'm concerned.