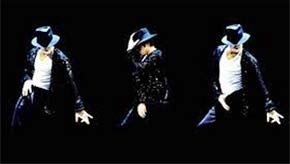 With the passing of Michael Jackson, everyone's mourning the loss of his moonwalk, the move he made famous. But what about his other big move: the crotch-grab. It was just as defining and identifiable with him as that sliding backwards step was. You know the one. It was usually preceded by a tight series of choreographed movements: shoulders shifted, a quick spin, an extended arm, a leg raised to a Can-Can wag, and then, there it would be - the crotch-grab. And you always thought: Did he just do that?

Yup, he did...again and again, which makes one wonder, what was behind this move of Michael's that was so front and center? Did it help him hit those high notes? Nothing like a sudden crotch-grab to help you eek out a high "hee-hee" or a throat-catching cry. Those vocal calisthenics were as much a part of his signature style as the, er, jerking movements they seamlessly accompanied. No, it seemed like music in Michael permeated his whole being, infusing his voice and every body part, and that means every body part. So where did it come from?

Michael had already revolutionized an art form with his music videos. In an era when most artists just fronted bands or sang in settings, Michael added storylines and production numbers. After Michael, music videos were not just for music anymore. They became mini-movie musicals with Broadway worthy showstoppers.

It started with "Beat it" with its West Side Story scenario and gang-member dancers. That was immediately followed by "Billy Jean" which featured Michael literally lighting up the pavement with his patented moves, evoking the lit steps in "Stairway to Paradise" from An American in Paris, an MGM musical classic.

It's no secret Michael studied those old movie musicals, with a special appreciation for Fred Astaire whose effortless grace and ingenious routines he tried to emulate. After Michael's Motown 25 TV special appearance in which he moonwalked into a twirl to his toes while sitting on air, Astaire would return the complement.

Michael milked that moonwalk in his extended video for Thriller's title track which broke new ground with its size in both content and length. But with the Bad album's videos, the crotch-grab became just as prevalent, and it was instantly - how shall I put this - impactful, as it was widely copied. When Madonna did it in her music video for the aptly titled song, "Express Yourself," critics were shocked by the "crude" and "obscene" move, even calling it "unladylike." (Come on, people, we're talking about Madonna!)

Madonna herself would counter that Michael Jackson did it first. Her point - women should be allowed, even empowered, to do anything men could. But just because we can, doesn't mean we should. (Men declare war a lot, too.) At some point, shouldn't judgment be the, um, ruler?

To this day, "Express Yourself" remains one of the most gorgeous videos ever made. It would be rivaled by the glossy "Scream," Michael's duet with his sister Janet in which every buck of the $3 million budget is on screen. It was a cinematographic oxymoron: a futuristic scene set in throwback black and white, a choice that only highlighted Michael's evolving skin color. In that one, Janet only grabbed her breasts, her future Superbowl halftime flash still just a glimmer in her eye. She would explain it as "empowering," clearly owing a debt to Madonna who owed a debt to Michael. What goes around, comes around.

Was it just coincidence that the move was favored most by those in make-up (tattooed or otherwise)? Let's face it, you never saw muscle-bound men do it. Why should they, with their testosterone perpetually on pumped-up display, though our knowledge of steroid's side effects tells us they may not have much to grab.

Still, if you want to see some major league crotch-grabbing, you can do no worse than a day at the ballpark where the ritual is as ubiquitous as spitting. Be it pre-pitch, or post-slide, players are constantly adjusting, and not just to at-bats. But then, ballplayers have an excuse for their "ball playing." They have to wear a cup. At least that's their story. They're lucky to have a reason.

The Castrati of the 1800s were falsetto singers, castrated in boyhood to extend their soprano careers. (Those wacky Europeans.) Like them, Michael had been a child star who maintained a high voice into adulthood. Perhaps the gesture was his way of asserting that he had indeed grown - in every way.

It's a paradoxical move for a man who claimed he never wanted to grow up, and yet moved to prove his manhood by grabbing his, well, manhood. If only Peter Pan had told everyone to grab their crotch and think happy thoughts, they might not have needed the fairy dust to fly, but now we're getting into a weird area. Could the move have been Michael's way of rebelling against the prison of a self-imposed endless childhood? It wasn't the only Jekyll and Hyde thing about him as his appearance and actions sometimes crossed dangerously over into disturbing distortions of himself.

But then, so did Elvis in his later years. By all accounts, Michael studied Elvis Presley while aspiring to a similarly lasting legacy. That king's trademark gyrating hips caused The Ed Sullivan Show to show him only from the waist up. But viewers glued to their TV sets could hear the screaming studio audience come alive with each gyration. Could the crotch-grab have been a conscious effort on MJ's part to reinvent that controversy provoking/frenzied reaction? It's not too far-fetched a supposition given his other claims to the throne.

His self-proclaimed "King of Pop" title was certainly his most blatant, as his PR reps informed media they'd be denied access unless the moniker was used. Which isn't to say it wasn't deserved. The staggering success of Thriller alone practically served as coronation, though some would argue Elton John, with his record-holding number ones also has a claim. Could he and writing partner Bernie Taupin have another "Candle in the Wind" in them for Michael? Certainly, no one evokes a flickering flame like he did. (The light that shines twice as bright burns half as long.)

And if you want to be the heir-apparent to the kingdom, a union with The King's daughter's not a bad idea. For someone growing up in Graceland, Neverland doesn't seem like such a strange stretch. Conversely, the only thing I ever had in common with Michael, besides a love of music, was that we were both known for our porcelain complexions (mine, from DNA).

I saw Michael live at The Grammys at Radio City Music Hall. He performed (Michael never just sang) "The Way You Make Me Feel" and "Man in the Mirror," two exquisite songs. He did the crotch-grab during the former and, yes, the crowd screamed. But it was his showmanship and stagecraft that blew me away, skills honed over a lifetime, skills still on display in his last rehearsal. Still, my personal favorite song of his remains the Jackson Five's "Never Can Say Goodbye" which brings me to the inevitable: How to say goodbye.

That big moment will come during a farewell tribute on Tuesday. Clearly one can't moonwalk in an auditorium's cramped seats, so here's what I'm thinking: How about at 2:26 p.m. (the official time of death), instead of a moment of silence, everyone stops what they're doing, wherever they are, whoever they're with, and does the crotch-grab. Just stand up in Staples Center, pull the car over, or get up from the couch, grab your crotch and hit high "hee-hee" for Michael. It's the least we can do for a man who spent the bulk of his life giving us a soundtrack for ours. So do it with style. Do it with flair. Do it for him. Because we can.