They say every cloud has a silver lining. It is a nice sentiment and the world would be a far lovelier place if it were true, but when Sony released Xscape last year - its latest collection of remixed Michael Jackson demos - it seemed positively irredeemable. Muddled, uninspired and inexplicably issued on the only record label Jackson chose to protest against in his lifetime, many of the star's fans were so unimpressed they felt moved to boycott the release.

I used this blog to deliver my own withering appraisal of the collection, drawing on Jackson's own writings and interviews to demonstrate why he would have opposed such a release. While the original demos - released in an expanded version of the album - provided a tantalising glimpse of Jackson's creative process, it remained the case that he had left each of these tracks on the cutting floor for a reason, and some of those reasons were apparent upon listening. Moreover, the 'contemporized' (vandalized) new versions were universally inferior to Jackson's original concepts.

It is with great surprise, therefore, that I find myself conceding that something positive has actually come from the album's release. It comes in the form of Xscape Origins, a new book by Australian journalist Damien Shields. After reading my Xscape review he sent me an early draft of the manuscript and I can now post the world exclusive first review of the final product. 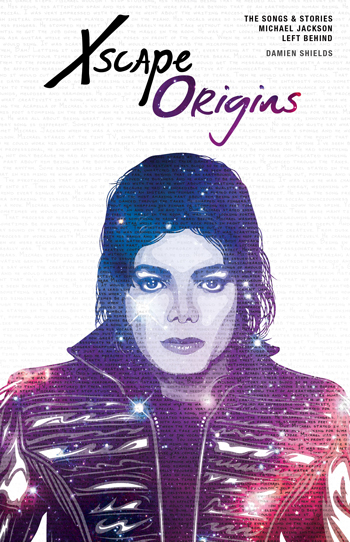 Shields was perplexed that Sony relegated the Jackson's original compositions to a bonus disc on a more expensive version of the album. While current producers were wheeled out for seemingly endless interviews to promote their re-imaginings of the artist's work, Jackson's own vision and process was almost completely overlooked.

Determined to right this perceived wrong, Shields flew to America to interview a number of Jackson's original collaborators, including songwriters, studio engineers and producers. In his book he presents a comprehensive back story for each track. The result is a revealing and exciting insight into the working habits of pop's most reclusive star.

If the Xscape demos provided a tantalizing glimpse of Jackson's alchemy, Shields's book boots down the studio door and places the reader right there behind the mixing deck, providing a front row view of the star's process. And what a process it was, with the singer funding round-the-clock work by world class musicians and engineers, sometimes on and off for decades, to perfect each track before it could be released under his name.

In Shields's extensive interviews, Jackson's collaborators portray him as a tireless perfectionist; he had enjoyed a longer career by age 18 than most artists ever manage and was therefore determined that he would not waste more of his life recording unless he could produce something truly ground-breaking every time.

While exacting, Jackson appears typically childlike in many of the book's tales from the studio. In one, Jackson tells his producers off for not thinking far enough outside the box, asking what's stopping them from simply inventing a new musical instrument. In constant search of a new sonic experience, Jackson sets up a microphone on the floor and records himself splatting eggs. Another day, he sends his team to a junkyard to 'find me some new sounds'.

Jackson is like a musical mad professor, refusing to be constrained by tradition or accepted practice. That said, not all of the tracks are born of such wild sonic experiments. Some evolve from good, old-fashioned jam sessions, Jackson at one point busting his famous stage moves in the recording studio as he challenges his bassist to keep creating rhythms that make him want to dance.

These insights are invaluable. As Shields acknowledges in his opening pages, Jackson is arguably not always afforded the credit he deserves as a musician, in part because he largely refused to engage in any meaningful discussion of his work. Schooled at Motown, he learned from a young age that to be anything other than irritatingly non-committal in press interviews was completely out of the question.

He routinely batted away questions about his process, insisting at times that he could take no credit for his music, which he would blandly claim God had given to him, fully-formed. He would notably change tact when he ended up in a courtroom, as he so often did, facing frivolous plagiarism suits, at which point he would suddenly be able to give a step-by-step account of each song's creation - but precious little of that testimony has been made public and as such, mystery continues to surround his methods.

The process described in Shields's book is surprisingly collaborative. While Jackson would frequently bring his own material to the table (one collaborator recalls him singing entire compositions to his musicians - every note of every chord - so they could play and record them), he was equally happy recording others' material if he felt it was strong enough. At any one time, he may have three teams of producers all working separately on one album, competing with one another to create the best songs and secure their place on the CD.

In some cases, Shields's stories are more interesting than the songs they describe. After all, these were tunes Jackson ultimately decided were not worthy of inclusion on his albums. The creators of Blue Gangsta repeatedly describe the track to Shields as a 'modern day Smooth Criminal' - which sounds a lot like wishful thinking. Monotonous - not to mention slightly ridiculous, given Jackson's public image by the time he recorded it - the tune was somewhat of a low point on the collection. However, reading the team's vivid recollections of Jackson stepping into the booth to record his vocal almost gave me goosebumps by proxy.

Moreover, some chapters do not necessarily only detail the creation of individual tracks. Shields uses some songs as vehicles to detail months of sessions, particularly for Jackson's 2001 album Invincible, whose creation was turbulent and has long been shrouded in rumor and secrecy. The Invincible chapters also document the star's deteriorating relationship with Sony.

Hundreds of books have been written about Michael Jackson, but this is one of the very few must-reads to have been published since his death, forgetting his much-debated private life and shedding light on the one area most people appear least informed about; his work.