Even the grumpiest among us are jolted into a state of joy and wonder at the sight of a rainbow. (Just refer to the "Double Rainbow" guy, if you haven't watched this video a thousand times already.) Rainbows give us the magical high we try to get from great art, and now we can feel the thrills of experiencing both at once. In what may be the happiest art project ever, Michael Jones McKean is creating homemade rainbows this summer for 15 weeks at an art center in Omaha, Nebraska.

McKean has working on "The Rainbow: Principles of Light and Shapes Between Forms" for the past ten years, mixing rainwater and sunlight on a massive scale to create two rainbows a day for 20 minutes each. Scientists, plumbers and irrigation experts all helped build a renewable energy system and custom-designed pump at the rainbow's site, the Bemis Center for Contemporary Arts. In order to find out more, we asked McKean some questions about his work. Scroll down for images.

HP: You have commented on the rainbow's ability to exist between the real and representations, which is also a magical quality art possesses. What can we learn from rainbows in terms of viewing art?

MJM: When we see a rainbow we’re witnessing a fixed, visual constant that races toward us through millions, billions of years of earthbound time. It is an image that exists simultaneously as a here-and-now event, but also as an ancient thing –- our ancestors saw this identical color band in the sky. It’s an image burned into our collective being. For me, this is artwork not about spectacle –- it’s about building a constellation of delicate metaphors about time, image, material, the earth and people.

HP: You have been working on this project for a decade. What were some challenges you faced?

MJM: It’s funny because making a rainbow is an easy thing to do; we’ve all experienced the back yard, sidewalk magic of hydrant and garden hose rainbows. What made the project difficult had to do with scale and more specifically the insistence of harvesting and reclaiming rainwater in a perpetual loop. From the beginning, it was essential to consider water as a rare commodity within the project -– from this, a set of difficult problems cascaded down in which to solve -- problems that required a very specialized group of people and an organization willing to step into the unknown.

HP: How has the rainbow been "branded and commodified," as you've argued in the past?

MJM: When someone says "rainbow" we tend to picture it in the minds eye as some logo, a sticker, cereal box, a pride flag, kitsch bric-a-brac -– the prevalence of these images in many ways speaks to a certain power that the rainbow has on us -– but it inevitably manifests in our culture through branding. But a real rainbow, an actual prismatic one hovering live like a color ghost in the sky still has the ability to jolt us from the everyday, to focus our scattered attention spans, to slide into reverie.

HP: Do you worry that rainbows could lose some of their magic if they become man-made events?

MJM: I’m making a project that flirts with the charged space -- as you mentioned earlier -- between real and representation. Buried within the DNA of the project I’ve tried to maintain an essential decency, and resiliency to the image… Over the course of the entire project the rainbow appears only fleetingly -- a few minutes here and there. To some degree, the rainbow is never there -– we wait for it in all its contingency and fragility, still leaning on the whims of nature with sun and rainwater remaining fixed tenets within the project. Even as we’ve gone to extreme measures to produce a rainbow, the project exists for most people more as a figment in the mind, in many ways as a real one does...

"The Rainbow: Principles of Light and Shapes Between Forms" will show from mid-June until September 15 at the Bemis Center for Contemporary Arts in Omaha, Nebraska. 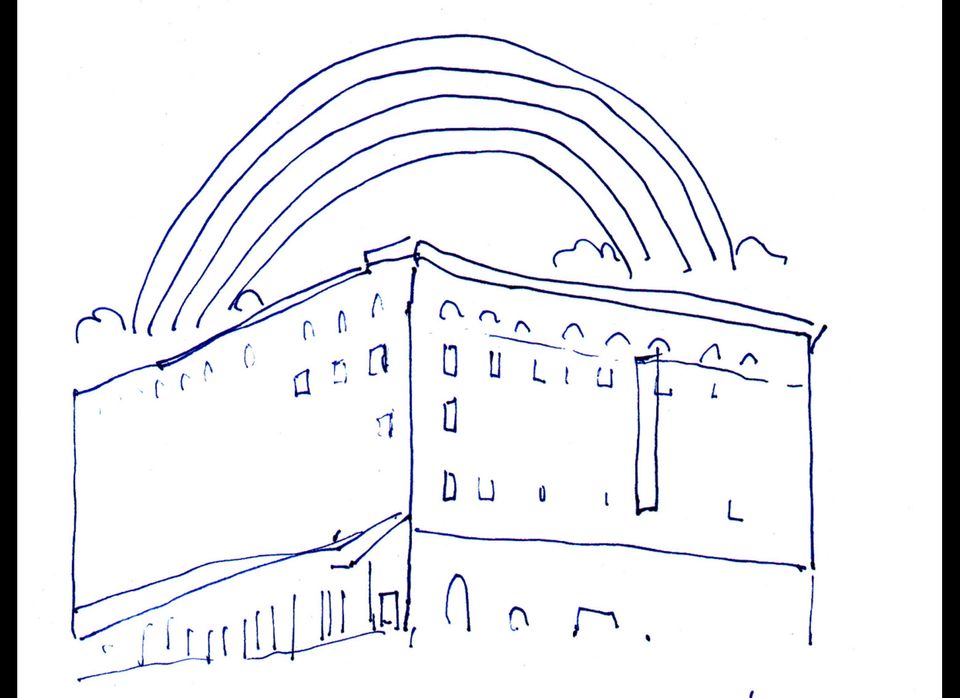