Michael Jordan's suburban Chicago mansion has hit the market with an asking price almost as big as its former resident: $29 million.

The 32,683 square foot house sits on seven acres of gated green space in Highland Park, according to the Baird & Warner listing. The contemporary, luxurious home is being sold fully-furnished, including the customized gate with the Chicago Bulls star's former number, 23.

The home also features a three-bedroom guesthouse, an outdoor tennis court, a pool, a lake and three climate-controlled multi-car garages.

Its two stories contain nine bedrooms, 15 full bathrooms and 4 half baths. (And of course, a full basketball court.) The house was built in 1995, midway through Jordan's "three-peat" with the Bulls, and shortly after his brief flirtation with baseball.

Don't bother trying to sneak in a free tour--showings are only offered after financial viability has been confirmed. Interested in taking a peek? Check out photos from the listing below: 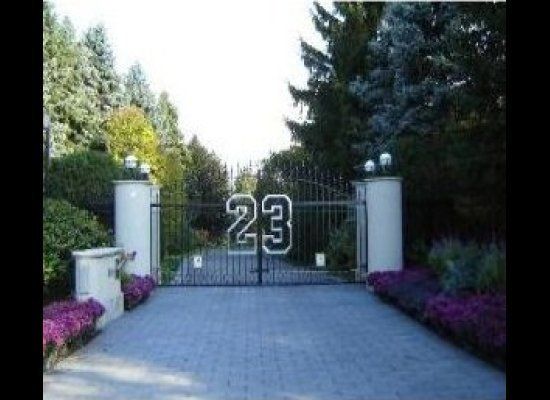