Michael Lohan has stated that Perez Hilton is likely to gets AIDS because he is a "sausage jockey."

His epithets came soon after Perez posted Tuesday on his site an apparent screen grab of Michael's Twitter page in which Michael appeared to have tweeted about his daughter Lindsay being HIV positive. The image appears to be Photoshopped and taken from the blog ONTD, not Michael's Twitter page.

Michael was quick to claim he had been hacked by a cyber-impersonator who posted and swiftly deleted several vicious and untrue remarks. He said he contacted his lawyer in an attempt to track down the hacker then fired off this homophobic rant at Perez. 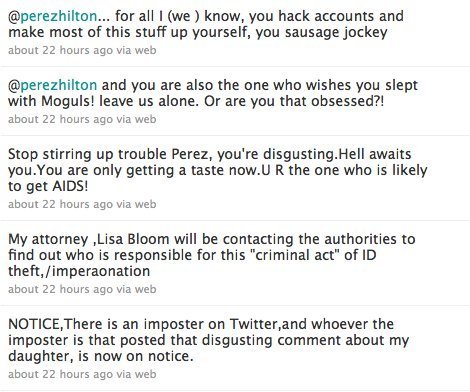 "I love sausage!" Perez tweeted in response. And: "Despite you, Lindsay will get help. And she still will want nothing to do with you! Eventually you will have to get a job."

Lindsay isn't convinced it wasn't in fact her own father who started the HIV rumor.

"He's a grown man and has done the exact same things on TV/interviews, why wouldn't he lie on Twitter, and everywhere else!" she told Gossip Cop. "He just wants money -- and he's using me, my name, my status, my mother, brothers and sister for the cash to pay for [another] wedding."