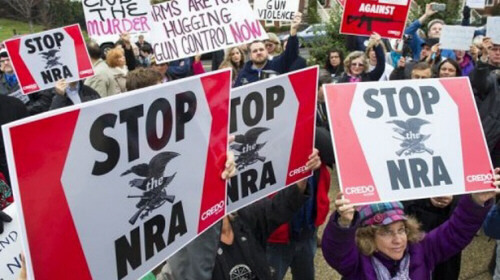 He spent $12 million last year trying to get members of the Senate to vote for background checks, but his return on investment was lousy. Senators -- including some Democrats -- didn't have the guts to pass the bill, even though polls showed mandatory background checks for most gun buyers was supported by 91 percent of U.S. voters at the time, including 96 percent of Democrats, 88 percent of Republicans and even 88 percent of gun- owning households.

So this year Mr. Bloomberg has as a new strategy. Instead of trying to change lawmaker's minds, he's going to try and change their faces. Borrowing a page from the NRA playbook, his new group, Everytown For Gun Safety, will campaign against lawmakers who don't support their agenda.

and there's a reason. Men view the gun debate mostly in terms of hunting and losing their rights to own a firearm. Women worry about their kids getting slaughtered at school or getting raped at gunpoint. I'd call that a basic difference.

Gun violence is a big factor in violence against women. The numbers don't lie. Women are over three-and-a-half times more likely than men to be killed by an intimate partner. And a gun in a household with a history of domestic violence increases that risk by twenty fold. Stalkers also use guns against their victims, but right now picking one up at a gun show or online is no problem, even if they've been convicted in the past. Before this month is over 50 women will be murdered with a gun by a husband or boyfriend.

And school shootings? According to Everytown's website, there have been more than 60 since Newtown.

We've all heard the expression "Don't get mad, get even." Everytown for gun Safety is hoping that if enough moms get mad, they'll get even all right. With politicians who value the NRA over their safety and the lives of their kids.

So here's to ya, Michael Bloomberg. I'm a mom. Sign me up.