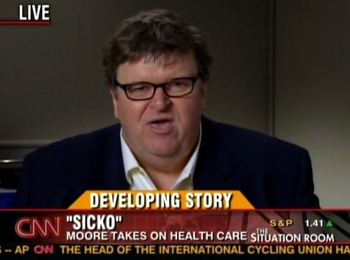 Ooh, wow — somebody's going viral: Earlier this afternoon on CNN's "The Situation Room," Michael Moore went berzerko on Wolf Blitzer after a clip by Dr. Sanjay Gupta challenging Moore's healthcare facts in Sicko. Gupta claimed to have found a few nits — Americans actually have "shorter wait times than everyone but Germans" for non-emergency elective procedures, and he gets a different per-capita health care spending figure for the U.S. and Cuba (but doesn't source his data, or Moore's, or the metric used, so it's hard to tell). He also questioned Moore's characterization of other health care systems as "medical utopia," dissing Canada and France. All told, a pretty slim "gotcha!" moment, yet Gupta closes thusly:

So, there's no perfect system anywhere. But no matter how much Moore fudged the facts -- and he did fudge some facts -- there's one everyone agrees on. The system here should be far better.

Oooh, snap! Moore was NOT happy — with Gupta or with Blitzer or with CNN or with anyone in the media, dammit. See a sampling here:

The full ten-minute clip is here — at CNN.com, which means someone is smart over there — and is spreading around the net like wildfire. Definitely worth a watch, but the transcript is here, and here is ETP's favorite excerpt. Talk about "fire and ice" — it is fabulously entertaining to watch Blitzer stoically try to pull Moore back on topic as Moore goads him like a jilted lover. Very Scott McClellan-David Gregory circa 2006. Like so:

MOORE: You have the questions. Why are we here? That's the question. Why are we here in this war? Where's the weapons of mass destruction? Why didn't you -- why did it take you so long, Wolf, to finally take on Vice President Cheney? It took you to 2007 before you made the man mad at you.

BLITZER: Those are fair questions.

MOORE: Where were you?

BLITZER: Let's talk about "Sicko." That's the film that you're here to talk about.

MOORE: I just haven't seen you in three years, so I was wondering how you felt for three years of not seeing me after you trashed "Fahrenheit" and said that I was wrong about, oh, yeah, this war was -- come on, I'm just waiting for an apology.

MOORE: Really? And you wanted to apologize? Why did you want to talk to me?

BLITZER: No, we wanted to interview you. That's what we do on television. Let's ...

BLITZER: Which of the presidential candidates who are out there right now do you think would do the best job fixing the nation's healthcare system?

Or maybe the best part is when Moore acknowledges that he rarely gets invited for live interviews because he's sorta unpredictible:

BLITZER: I've got a whole bunch of questions. Unfortunately, we're out of time. But if you stick around ...

MOORE: We're out of time! I'll see you in three years.

BLITZER: No, no, stick around. We'll tape some more. We'll run it tomorrow. We want to make sure you get your chance to ...

MOORE: Oh, no, see, that's the deal, Wolf. There's no taping with me. As you know, it's rare that they put me on live. And to your credit, thank you for doing that. You can see why. They generally don't like to have me on live because, you know, a lot of that would have been cut out.