I recently asked Michael Pearce -- an Associate Professor of Art at Cal Lutheran University, and the driving force behind last year's TRAC 2012 Representational Art Conference -- how he liked to spend his time when not involved with art. His reply took the form of a question:

"What else is there?"

Pearce is currently on sabbatical from teaching, but doesn't seem a bit interested in sitting by the pool. During his time away from the classroom he is continuing to work on his personal mission: changing the course of art history.

Two weekends ago Michael Pearce gathered a select group of writers, academics and museum directors in an upscale hotel conference room, and gave them six hours to chat through a list of ten questions including one of his personal favorites: "What is the place of beauty in contemporary representational art?" The symposium, and the seven course meal that followed demonstrated one of Pearce's strengths: he knows how to bring people together, make them comfortable and get them talking. The event was also -- in Pearce's words -- a "call to arms," intended to generate wider discussion on the future of representational art.

"Michael has an unrelenting dedication to the revival of skill-based art education in the academy," observes Pearce's friend and colleague Michael Lynn Adams. In all his projects Pearce has the full support of Cal Lutheran's President Chris Kimball, and a campus gallery -- the Kwan Fong Gallery -- where exhibitions and demonstrations by representational artists make his vision tangible. 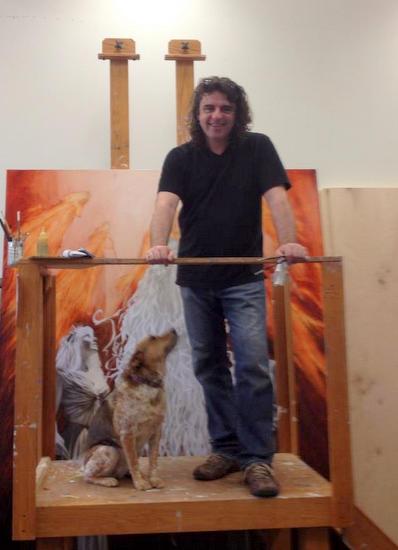 Pearce first went public with his ambitions as director of TRAC, held in Ventura last October. The conference, which was attended by over 150 people, was developed around an assertion that Michael and his co-organizers share: that there has been a "neglect of critical appreciation of representational art well out of proportion to its quality and significance." Attendees heard critic Jed Perl tell them that they live in a "time when authenticity is embattled." and they seemed to eat it up. Dr. Kay Kane, a lecturer in Life Drawing who came all the way from Australia to attend, later wrote: "I came away from the conference with an overwhelming feeling of excitement at the ideas, both visual and intellectual, to which I had been exposed."

Of course, the term "representation" is quite broad, but the TRAC conference mainly drew artists whose tastes and methods are rooted in the long lineage of pre- 20th century European painting traditions. Pearce himself has a taste for the works of Bouguereau and the Pre-Raphaelites, and feels that Impressionism was a detour that led to Duchamp knocking beauty right off the highway of art history. Not surprisingly, Postmodernism, with its tendency to favor ideas over skill and irony over sincerity, is an approach that Pearce sees as exhausted. As Postmodernism wanes and wilts, Michael Pearce is optimistic that beauty, skill and engagement are waiting in the wings, ready to spread their wings and fly again.

I recently spoke to Michael, and asked more about his background, his views, and the planning for the second TRAC conference.

Can you tell me a bit about how and when you came to the US?

I'm a classic US immigrant. I landed here on my birthday in 1990, with a backpack and $1,000, which didn't last long. England was miserable in those days - everyone I knew was unemployed. I came here because I'd been given a scholarship to do an MFA and a job as a teaching assistant at USC, which was a fantastic deal - I got paid to be a student in California! While I was at USC I had the good luck to meet Ruth Weisberg and take her Life Drawing class, and I've kept in touch with her ever since. I deeply admire her.

All I knew about California came from reading Tom Wolfe, so everything was new to me. I lived in a hot pink house in West Hollywood with an elderly, profoundly alcoholic white ex-actor and his young Korean businessman partner. They adored each other. Our other roommate was a hippie girl from Santa Cruz who wanted to be a movie star. I was given a motorcycle, which I promptly crashed, so I bought a beat-up backfiring old jeep. I loved driving that car around LA, along palm-lined boulevards.

What educational and aesthetic experiences shaped you most powerfully?

Before I came to the United States I had been a theatre student at Dartington College, in the South-West of England. The people who established the college loved Rudolph Steiner's ideas about education, so it was an extraordinarily creative environment, where wonderful stuff happened.

You might walk up the mile long driveway to get to class, watching a steam train puff its way alongside the winding river in the valley below, and encounter a group of students dressed up as Edwardians wandering through the fields with umbrellas and balloons, then have to jump out of the way as a group of naked people painted blue ran past. I felt very comfortable there, because that sort of thing was going on in my head all the time. Looking back on it, I don't think I really learned performance there so much as I learned how to manifest my imagination, and I think you can see that in my paintings, which are both performative and idea-driven. It's as if being at Dartington gave me permission to have ideas and share them without worrying about them. The problem isn't coming up with ideas for paintings, it's about choosing which ones will work well.

The other formative educational experience for me was doing my PhD, which was all about using Prehistoric art and architecture to make contemporary art. I loved exploring ancient landscapes and sacred spaces and deciphering the traces of things that had once been normal and ordinary, but which became completely mysterious. I didn't know it then, but it was the beginning of a long creative journey into symbolism that I have absolutely loved making.

How do you respond/react if someone characterizes you as "conservative" in your aesthetic tastes?

Appreciating representational art isn't a characteristic of being conservative; it's a characteristic of being human. We've been making representational art for forty thousand years. I have tremendous faith in perennial truths, but I've got little interest in nostalgia and imitation. I want to emulate the great artists of the past but I want to make paintings that are relevant to the present.

"Conservative" implies looking backward, but I'm glad that the 20th Century's over. I think the 21st Century offers so much cause for optimism; the world wars are passing out of memory and becoming history. New ideas about emergence that are coming out of science are exciting, optimistic and truthful, about things being bigger than the sum of their parts. I want to make art that reflects that.

You once told me in an e-mail -- speaking about TRAC and its supporters -- that "We are Postmodern." Can you expand on that?

The postmodern period is an uneasy time in which we are still shaping the ideas that will follow modernity - it's like the fifteenth century, when the ideas that would form the renaissance were gathering, but hadn't yet fully emerged from the late medieval. This transitional period is post-modern in just the same way that period was post-medieval.

Postmodernity is a condition, not an ideology. We're all postmodern simply because we happen to live in the era after modernity; there's a difference between living in an era and embracing a description of it as an ideology.

We seem to be fascinated by seeking definition for whatever follows modernity because we desire cultural focus, but it took until the sixteenth century for Vasari to name the renaissance. I expect the new age will be named with retrospect in a hundred years or so. I think democratic choice will be a major force driving art. The times are uniquely suited to it.

You seem to have remarkable drive and energy. What motivates you?

Genes? My mother is a very strong woman; she's a retired medical Doctor who practiced Radiology, and associate Dean of a University medical school. My father was an RAF squadron leader who flew bombers during the cold war. Living up to their example is quite a challenge.

In 1997 I rolled that backfiring jeep over on the Hollywood freeway, completely destroying it. I wound up in hospital, covered in blood. That wreck woke me up to the reality that life can be taken away JUST LIKE THAT. It was a revelation on the road to San Fernando. I remember thinking that if I had died I wouldn't have left behind much to be proud of, with the exception of my kids. I felt the need to serve very strongly, and to do everything I could to make the world better doing what I was good at, painting and designing. My ex-wife said "you should be teaching art". And she was right - I loved it, and still do. I love those moments when students "get it" and discover their ability. I feel the pressure of time very strongly - one day I'm going to die - so I paint, write or study daily.

If I were to say to you that Postmodernism is and has been "The Academy" for the past 30 years how would you respond?

Longer. I'd say the art academy has been dominated by postmodernism since as early as 1970, but that the roots of that dominance stretch back to at least the early 1900's. Establishment art is predictably nihilistic.

It's also tedious seeing endless imitations of Duchamp's toilet gag. In the last century we asked the question it posed about art and context a million times using bits of string, bricks and poo. There's not much mileage left in it. I imagine a bored Duchamp looking at that kind of derivative work saying: "Are you kidding me? I did that a hundred years ago." and turning back to the chessboard to move his Queen to Kb5 for a tidy checkmate. He was quite good at chess.

Are you optimistic that a new appreciation of art that requires skill and which is unashamed of being beautiful is growing?

Yes. People are hungry for it. We all love beauty, and we always will. Nihilism is an unsustainable, self-defeating ideology. I'm optimistic about the growing appreciation for emergent art that looks at all the things that have been sidelined - for example: realism (which is foundational to skill-based art), spirituality, authenticity and allegory. But I think we have work to do. The hand of the artist is back in the work, the ateliers provide technical training, now it's time to set imagination free and allow her to inspire fabulous, wonderful art that epitomizes these democratic choices. I think we have yet to create the exemplars of those choices.

When Michael Lynn Adams and I established the representational art conference in 2012 the reaction it got was extraordinary - it was as if we gave water to people in the desert. It's the only academic conference I know of that makes people truly joyful. In 2014 our keynote speakers are Roger Scruton, who did the lovely BBC2 show Why Beauty Matters, and Juliette Aristides, the prominent author and one of the leaders of the atelier movement. I hope you'll join us there, because it's the only conference out there that examines 21st century representational art - it's something quite unique. It's scheduled for March 2nd - 5th 2014 in Ventura, California.