With the London Olympics finallllly wrapped up (seriously, this year's games seemed longer than Jessica Simpson's pregnancy), the athletes can finally take some time off.

Unless you're Michael Phelps, who concluded his successful 2012 Olympics with a brand new Louis Vuitton ad campaign. Some people never rest, do they?

Snapped by Annie Leibovitz, the shot shows 27-year-old Phelps soaking in a pristine white tub wearing -- what else? -- a Speedo. His Louis Vuitton tote bag, which we doubt he carries in real life, sits on the ground next to him.

He looks appropriately serious (Louis Vuitton ad campaigns are typically solemn affairs), but we can't help but wonder why Ryan Lochte, this summer's breakout heartthrob and one of the most fashion-loving (if not exactly stylish) Olympians, didn't get the gig.

UPDATE: According to the Daily Mail, a Louis Vuitton rep has confirmed that the bathtub shot isn't an official Louis Vuitton image, i.e. not part of an ad campaign. So maybe Phelps really does own his own LV bag? 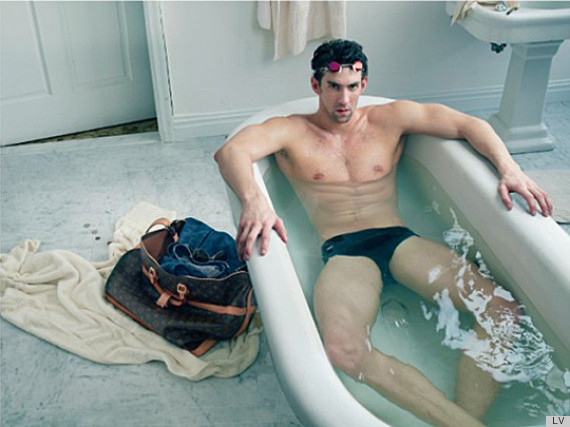